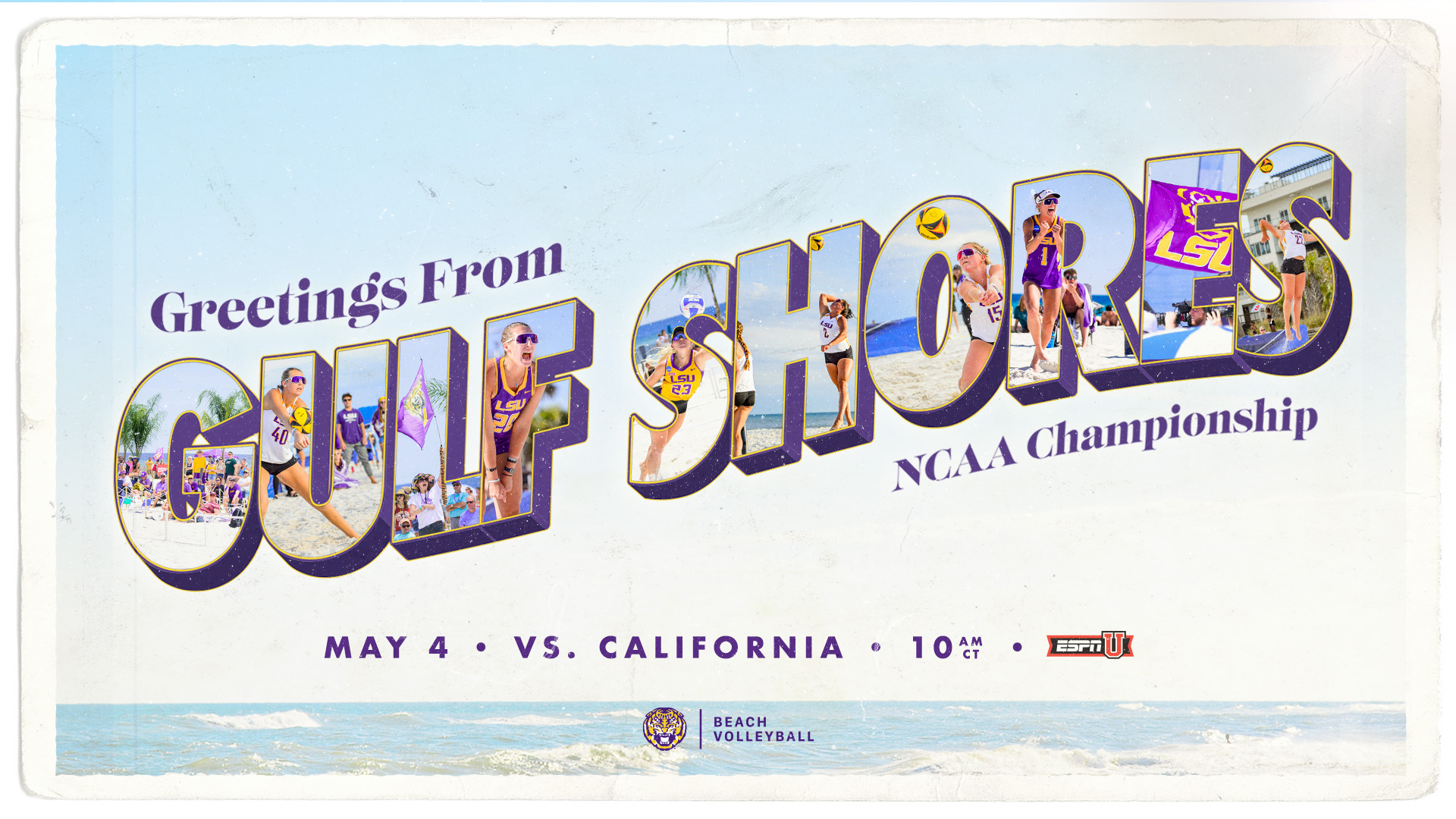 GULF SHORES, Ala. – LSU (30-10) will begin play at the NCAA Beach Volleyball Championship Wednesday morning at 10 am. CT against Cal (26-13) on ESPNU in a single-elimination match.

“This is going to be a good match and a tough battle,” said head coach Russell Brock. “That’s what we expect going into it. We know that we need to play well and we’re excited for that challenge.”

With only two players back from last year’s team that reached the semi-finals, the Tigers are back in contention competing for a title. With a win, LSU would tie its program record for wins in a season and the Tigers would advance to Friday in the double-elimination bracket against the winner of UCLA and Stetson.

“We got to practice yesterday and then we got to practice against today,” Brock said. “Especially for a group of players that hasn’t played this tournament before – most of them – it was good to be able to get here early and able to train.”

Along with Wednesday’s match being televised on ESPNU, live coverage of each individual court will be streamed on ESPN +.

The Tigers are coming off a week at the CCSA Tournament where they were defeated by Florida State in the semi-finals. The Seminoles went on to beat TCU to win the championship.

Cal is making its first appearance at the NCAA Championship after setting a program record for wins in a season. The Golden Bears finished in third place at the Pac 12 tournament last week behind UCLA and Pac 12 Champions USC.

“They’ve been one of the teams on the West coast that has been on the rise,” Coach Brock said. “They last couple of years they have gotten better and better and they have a good coaching staff. “They had several solid transfers that came into their program this year that have helped them make that jump to the next level.”

One Solid Unit
Get The Job Done pic.twitter.com/w2SNDXe3cG

Bracken, a grad-transfer from Grand Canyon who has over 70 collegiate wins, will be competing in her first NCAA Championship. She is teamed up with Bracken, a freshman from Mississippi who won the first 15 matches of her career. Since teaming up together this year, Bauman and Bracken have gone 7-9.

Deberg and Greene-Agnew have played well as a duo since being paired together, earning a spot on the CCSA All-Conference team. They are 17-3 together this season as a duo. Deberg is in her first season playing beach volleyball after transferring to LSU after an All-American career at Missouri. She played indoor at LSU last fall and earned All-SEC honors. Greene-Agnew has been in LSU’s lineup since 2019 and has racked up the wins. She enters the championship with 76 career victories – the sixth most in program history.

Allred and Carlton have played together as a pair for the entire season and are 29-10 together. With their success, Allred and Carlton were named to the CCSA All-Conference team. Allred is in her second season at LSU. This is the first season she has had a consistent spot in the lineup and she has shown great ability as a defender. Carlton transferred to LSU after and All-American indoor career at Florida. The left-handed blocker has been a powerful force in the stand standing at 6-7.

Seits and Shank have paired up for 15 matches this season and have a 10-4 record together as a pair. Individually, Seits is 26-9 this season and Shank is 27-9. Seits, in her third year at LSU, and Shank, in her second, are both playing consistently in the lineup for the first time of their careers this season.

Caffo and Rasnick-Pope are 9-1 this season as a pair. Caffo is 26-5 individually and has played all her matches on either Court 4 or Court 5. In her third year at LSU, this is Caffo’s first season playing in the lineup consistently. Rasnick-Pope sits at No. 5 on LSU’s all-time wins list with 78 career victories. This season she has seen action on all five courts and is 25-13.