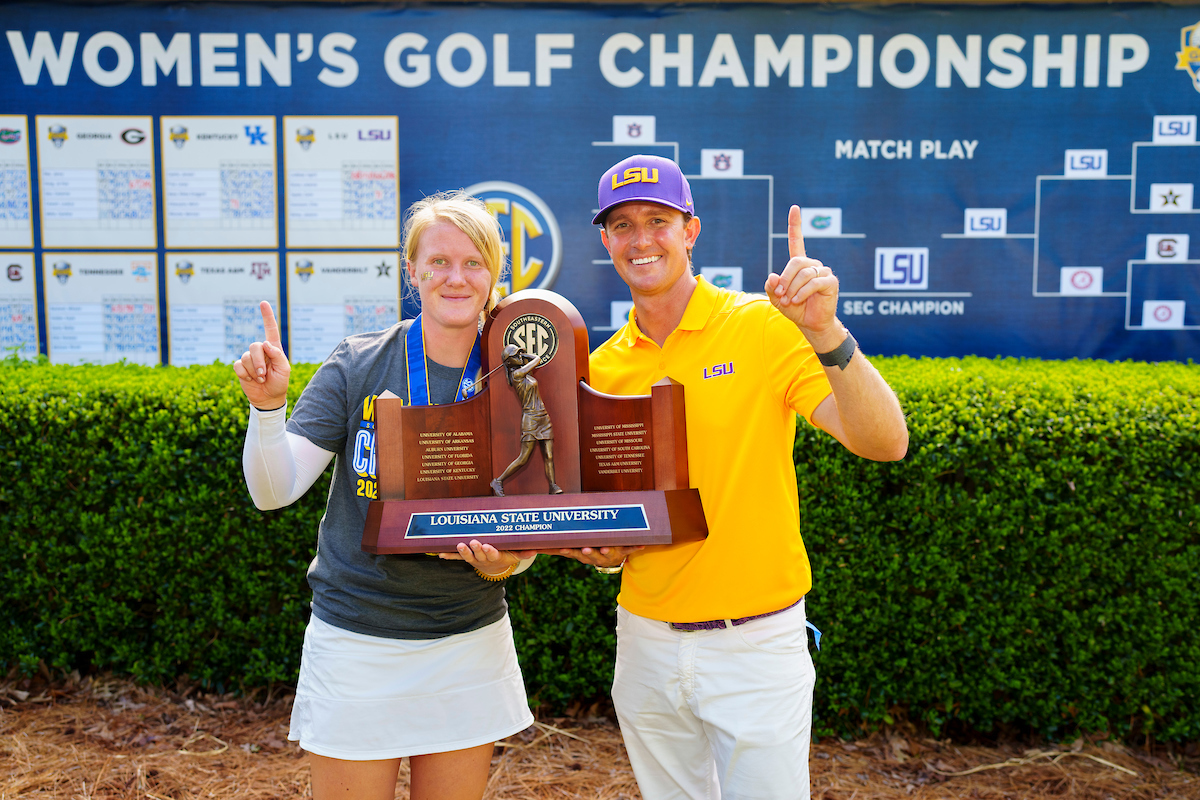 BATON ROUGE – LSU women’s golf coach Garrett Runion, who led the Tigers to their first SEC championship in 30 years last month, has been named to the watch list for the 2021-22 Division I Jackie Steinmann WGCA National Coach of the Year Presented by Golf Pride.

The award, presented by the Women’s Golf Coaches Association, will be announced after medal play at the upcoming NCAA Championships later in May.

Runion, a former LSU player, a national championship winning head coach at DII Nova Southeastern (men-2012) and while an assistant coach at LSU (men-2015), is in his fourth year as the head women’s golf coach at LSU. The Tigers won three times during the 2021-22 season – The Jackson T. Stephens Cup, the Clemson Invitational and the SEC Championship.

In two-of-those-three wins, LSU had to win in events with both stroke play and match play components.

Recognized as the highest annual coaching honor in women’s collegiate golf, the Jackie Steinmann WGCA National Coach of the Year Presented by Golf Pride is awarded annually to the top coach in Division I, II III and NAIA women’s golf. The recipient is selected by a prestigious collection of women’s collegiate golf coaches who follow criteria that has been established to identify the top head coach for the past year:

1. The award will be determined by vote from the Division I Awards Committee upon review of the 10 highest ranked coaches in each region and their respective records for the year.
2. From that list, the committee will determine the Golf Pride Regional Coach of the Year.
3. The top three per region, based on the vote, will be considered by the Committee for the Division I Jackie Steinmann WGCA National Coach of the Year Presented by Golf Pride and this will be based on the entire seasons’ results.

About the Women’s Golf Coaches Association
The Women’s Golf Coaches Association, founded in 1983, is a non-profit organization representing women’s collegiate golf coaches. The WGCA was formed to encourage the playing of college golf for women in correlation with a general objective of education and in accordance with the highest tradition of intercollegiate competition. Today, the WGCA represents over 650 coaches throughout the U.S. and is dedicated to educating, promoting and recognizing both its members and the student-athletes they represent.