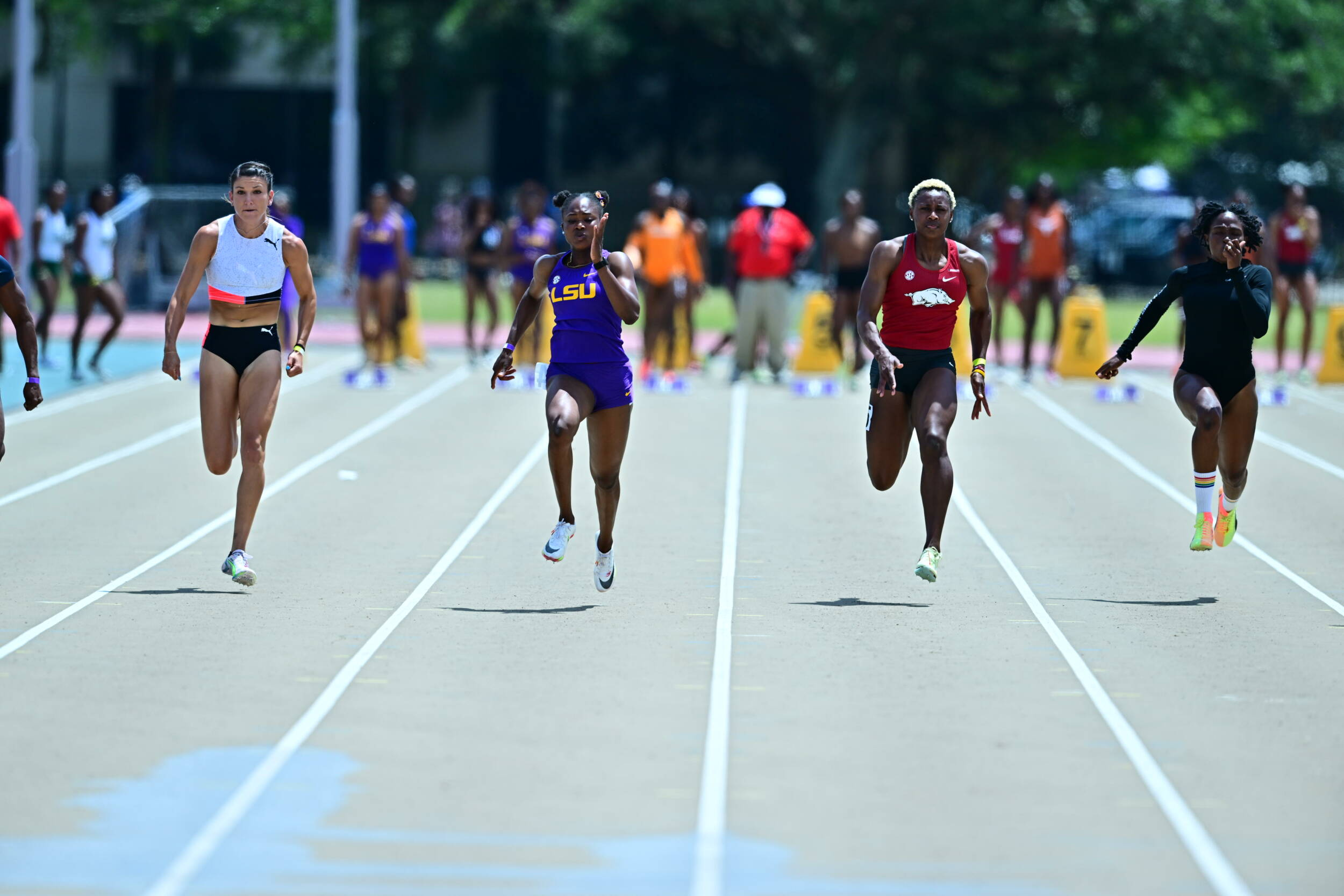 Baton Rouge, La.  –  LSU track and field’s Favour Ofili ran a blistering 10.93 in the 100 meter dash on Saturday at the LSU Invitational under the bright sun at Bernie Moore Track Stadium to win the event and move up to No. 8 on the all-time collegiate list.

Ofili, who already owns the collegiate record in the 200 meters, was running the 100 meter dash for the second straight meet. She burst out the blocks on the way to setting a wind legal personal best of 10.93 seconds in the event to win the title. Not only did she win the race, but she also beat three Olympic/world medalists whilst doing so in defeating Mikiah Brisco (10.98), Aleia Hobbs (11.11) and Jenna Prandini (11.15).

The story of the day in the realm of world athletics was definitely Erriyon Knighton, the 18-year old sprint phenom who finished fourth a year ago at the Tokyo Olympics in the 200 meters. He opened his 2022 outdoor season in his main event with a time of 19.49 seconds, the fourth fastest ever in world history behind Usain Bolt (19.19), Yohan Blake (19.26), and Michael Johnson (19.32). LSU sprinter Dorian Camel ran a personal best of 20.00 flat to finish third in the event; Camel’s time of 20.00 is the fifth fastest in LSU history and No. 3 on the NCAA list this year. It’s also the seventh fastest time in the world this season.

The men’s 4×100 meter relay beat a talented field of relay crews with a season best time of 38.85. It was a group of Eric Edwards Jr., Dorian Camel, Da’Marcus Fleming, and Kenroy Higgins II that combined for season best readout that ranks as the fifth fastest in the NCAA this year. The women’s 4×100 meter relay of Alia Armstrong, Favour Ofili, Symone Mason, and Thelma Davies ran a 42.85 to garner silver.

In the hurdles, Alia Armstrong picked up the win in a field that featured three of the top five hurdlers in the NCAA. Armstrong prevailed with a time of 12.72 to beat Grace Stark (Florida) and Ackera Nugent (Baylor). Eric Edwards Jr. was the top collegiate finisher in the men’s 110 meter hurdles with a time of 13.57 that he ran into a headwind. He finished second behind Olympic silver medalist Grant Holloway (13.34).

The distance crew had two other wins on the day. NCAA leader Katy-Ann McDonald won the 800 meter title with a time of 2:02.87, while teammate Michaela Rose placed third with a clocking of 2:03.34. Lorena Rangel notched a personal best in the race as well with a time of 2:04.74 to finish fourth. Adam Wise was dominant in the 1,500 meter run with a winning time of 3:50.60, winning by more than three seconds.

LSU had five other podium finishes on the day. The throws crew accounted for three of those. Both John Meyer and Tzuriel Pedigo placed second in their events. Meyer threw the shot put a distance of 66’ 1” (20.14 meters), and Pedigo threw the javelin stick 235’ 1” (71.66 meters). Amber Hart finished third in the women’s discus with a heave of 173’ 8” (52.94 meters).

Da’Marcus Fleming ran a wind-aided time of 10.02 in the 100 meter dash to finish in second place; that is the sixth fastest time in the NCAA this year. Morgan Smalls was the third-place finisher in the high jump with a clearance of 5’ 9.75” (1.77 meters).

That concludes the regular season action for LSU track and field. The team will have a week off before heading to Oxford, Mississippi, for the SEC Championships May 12-14.