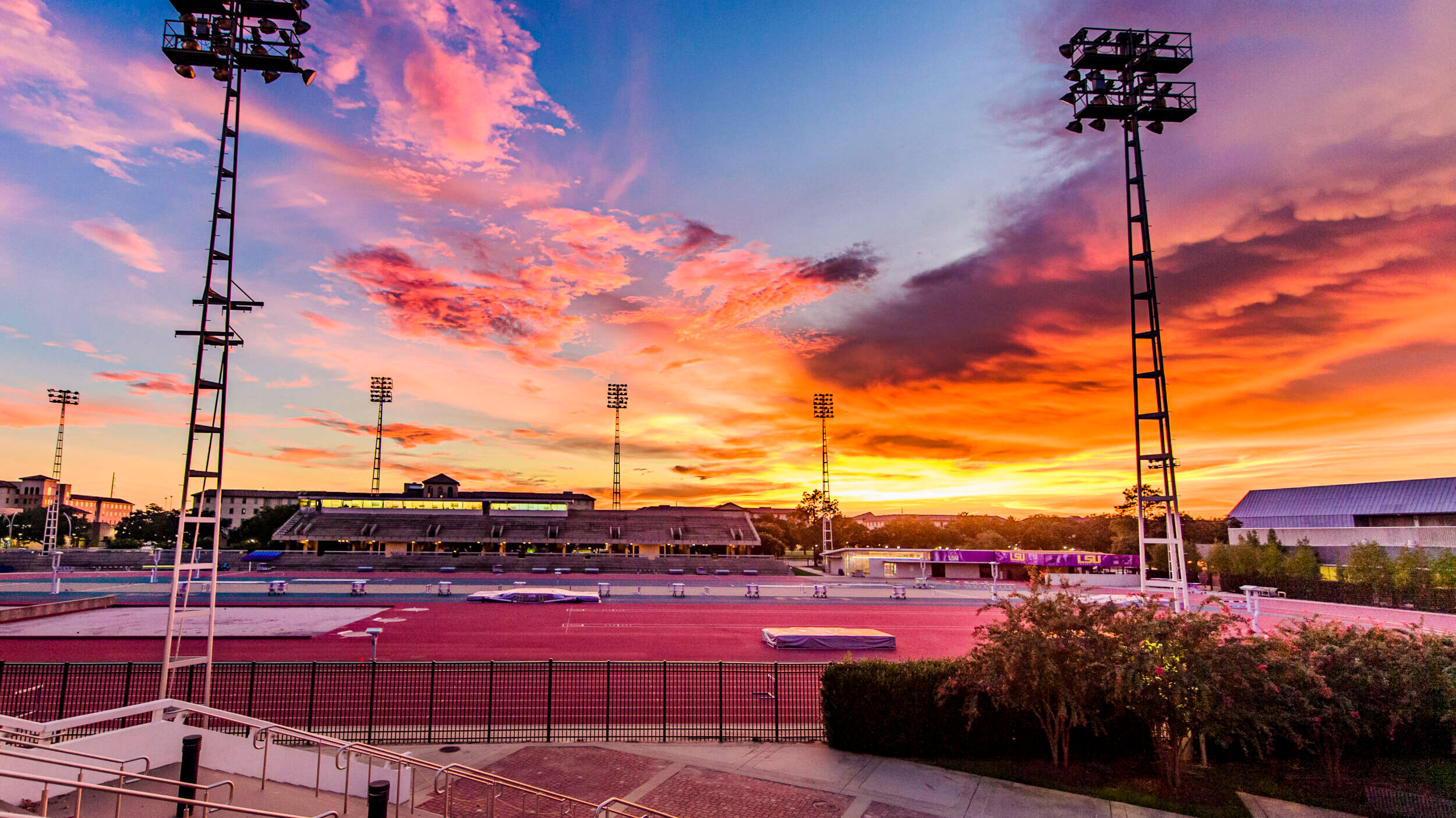 Baton Rouge, La.  –  The LSU Invitational hosted by LSU track and field at Bernie Moore Track Stadium this Saturday (April 30) will feature stout competition. What exactly does that mean? Thirteen nationally ranked teams in the top 25, including eight in the top 10. Numerous professionals, Olympic medalists, and the Canadian National Team will be competing as well.

Admission to the meet is free. LSU is also hosting a Garth Brooks concert on Saturday evening and that will effect normal parking operations. Fans should visit lsusports.net/garthbrooks for the most up to date information on parking. Visit lsusports.net for a detailed parking map for Saturday.

Marketing will be giving away these shirts pictured below to the first 250 fans through the main gate on Saturday.

The first 2⃣5⃣0⃣ fans in attendance at Saturday's LSU Invitational will receive this 'Home Of National Champions' t-shirt! The giveaway will begin at 10 a.m.#GeauxTigers pic.twitter.com/EwoVpq2j0H

It’s the regular season finale and the final tune up for the Tigers, who are ranked No. 4 on the women’s side and No. 10 on the men’s side, before postseason action begins in mid-May with the SEC Championships in Oxford, Mississippi. LSU has gotten in some productive work in the month of April as 11 of their current 16 national top-10 marks have been registered in the month of April.

In addition to the stacked collegiate field, 11 Olympic/world medalists will be in action as well at Bernie Moore Track Stadium. LSU alums Aleia Hobbs, Vernon Norwood, Mikiah Brisco, Cassandra Tate, and Lolo Jones are included in that list. Indoor world record holder in the 60 meter hurdles Grant Holloway will be in competition in the 110 meter hurdles and sprint phenom Erriyon Knighton will run the 200 meters. Knighton, who is now 18 years of age, took fourth at the Tokyo Olympics in the 200 meters as a 17-year old; this will also be his first 200 meter race of the season. Other marquee names set to compete are Ese Brume, Kendall Ellis, Jenna Prandini, and Marquis Dendy.

This meet will mark the end of the regular season for the Tigers and it will serve as their final tune up before postseason action begins. LSU will have 57 athletes (30 women, 27 men) set to suit up for the meet.

Alia Armstrong (LSU), Grace Stark (Florida), and Ackera Nugent (Baylor) will feature in a stunning women’s 100 meter hurdle race. All three rank inside the top seven of the NCAA with Armstrong’s season best time of 13.24w leading the way. Eric Edwards Jr., ranked No. 2 in the NCAA, will hurdle against the top hurdler in the world, the aforementioned Holloway, one week after setting his career best of 13.34 seconds.

In the men’s shot put, LSU school record holder John Meyer will have some stout competition as three of the top four throwers in the nation will be competing. Meyer’s school record of 67’ 3.25” (20.50 meters) ranks fourth nationally. Likewise in the javelin, Tzuriel Pedigo will be matched up with the nation’s top thrower. Pedigo set the LSU school record at the end of March with a heave 253’ 9” (77.34 meters), and he will be facing off the No. 1 thrower in the NCAA, Baylor’s Chinecherem Prosper Nnamdi.

Two-time national champion Lisa Gunnarsson will make her first appearance in the pole vault since the Joe May Invitational three weeks ago. She set a lifetime best of 15’ 3” (4.65 meters) in late March to become equal to the fourth best vaulter in collegiate history.

Favour Ofili, the collegiate record holder in the 200 meters, will line up in the 100 meter dash for the second consecutive week against LSU alums Aleia Hobbs and Mikiah Brisco. Ofili ran a very windy 10.90 in the event last week to take second place behind Hobbs.

NCAA leader Katy-Ann McDonald will run her first 800 meter race in two weeks after she set a lifetime best of 2:00.98 out in California. She’ll be joined by teammates Michaela Rose, Lorena Rangel, and Hannah Carroll. Rose ran a PR that same meet out in Cali with a 2:02.74; that mark is the sixth fastest in the nation this year.