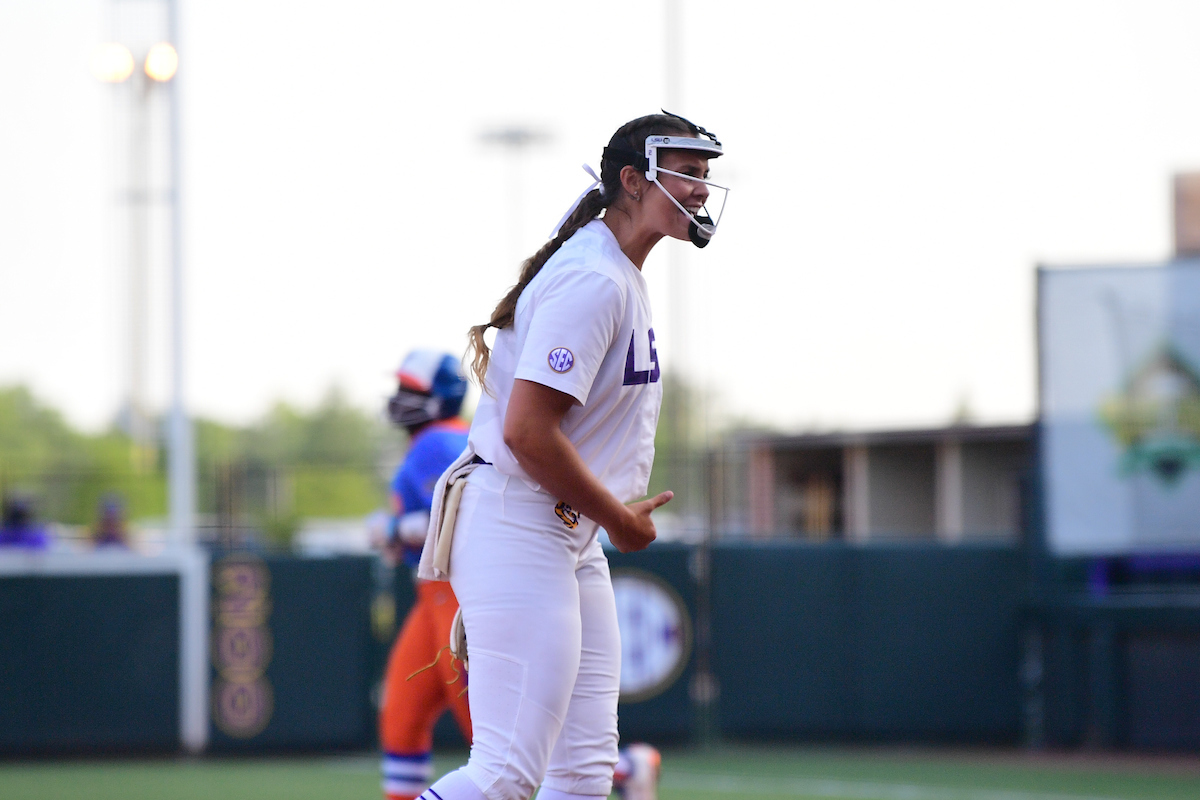 With the win, LSU claimed its 10th over a 12-game span and have registered 107 hits and 18 home runs. Every Tiger in the lineup had a hit and four players had multiple hits.

Defensively, the Tigers held Florida to a .087 batting average led by junior Ali Kilponen who has nine consecutive wins to improve to 17-4 in the circle. Kilponen relinquished only two hits and one run with three strikeouts in six innings.

Senior Shelbi Sunseri and junior Georgia Clark each had three hits in four at-bats. Clark had two RBIs on the night, including her 15th home run of the season. Sophomores Danieca Coffey and Taylor Pleasants was 2-for-4 at the dish. Coffey turned in her 25th career multiple hit game, while Pleasants – who also went yard for the second consecutive game – logged her 30th career multiple RBI game with a team-high three ribbies.

The Tigers opened the contest with two singles and an RBI double from Pleasants, and sophomore Ali Newland hit a two-RBI single with two outs to grab an early 3-0 lead after the first inning of play.

LSU extended its margin to 5-0 in the fourth inning. Freshman McKenzie Redoutey led off with a double to right center, junior Morgan Cummins singled to right field, and freshman Sydney Peterson drove in Redoutey with a single to centerfield. Sophomore Ciara Briggs drew a walk to load the bases with two outs, and Clark singled to left field for her first RBI of the game to cap a two-run inning behind four hits.

Florida dodged being shutout by putting up one run in the top of the sixth inning, but LSU clapped back with four runs in the bottom half inning, highlighted by back-to-back home runs from Pleasants and Clark. Sophomore Morgan Smith delivered the dagger with an RBI double to give LSU the 9-1 run-rule win.

On the team’s offensive performance…

“It was great. It was great to see hits throughout the lineup. Everyone in our lineup had a hit today, which is incredible to think about. Seeing everybody have success like that, you know Howard [Dobson], Lindsey [Leftwich], and Sandra [Simmons] have really been putting in the work and it shows. The kids have been putting in work, and they are seeing the results.

On how important it was to jump on Florida early…

“Any time we can see two pitchers in game one, it helps us out in games two and three, so I was glad we were able to see multiple arms and that they only saw one of ours for just six innings.”

On the team’s defensive performance…

“First thing that comes to mind is ‘what a good hitting performance.’ We executed in spots that we needed to. We wanted to do better with runners in scoring position and I think we were aggressive in making sure we didn’t leave any runners on base and getting early runs for our pitcher [Ali Kilponen] which gave us confidence.”

“I think the past few weekends we’ve dominated offensively and that’s a testament to our game plans and preparations made by the coaches so that we can come out and attack the strike zone. I would say this was an all-around good win.

On how the offense performed…

“It showed what we did this week. We put in a lot of work, and we were very diligent with what we were looking for and looking at. We did a lot of machine work and hit a lot of balls this week, and it paid off.”

On her personal performance…

“Just putting in the work really shows. I came early this morning to work on that screwball from [Florida pitcher Elizabeth] Hightower and any outside pitches. Having that pay off was nice. Once one person gets going, it’s a trickle effect.”

The series continues Saturday, April 30 with the first pitch set for 11 a.m. CT. The game will be televised on ESPN2.