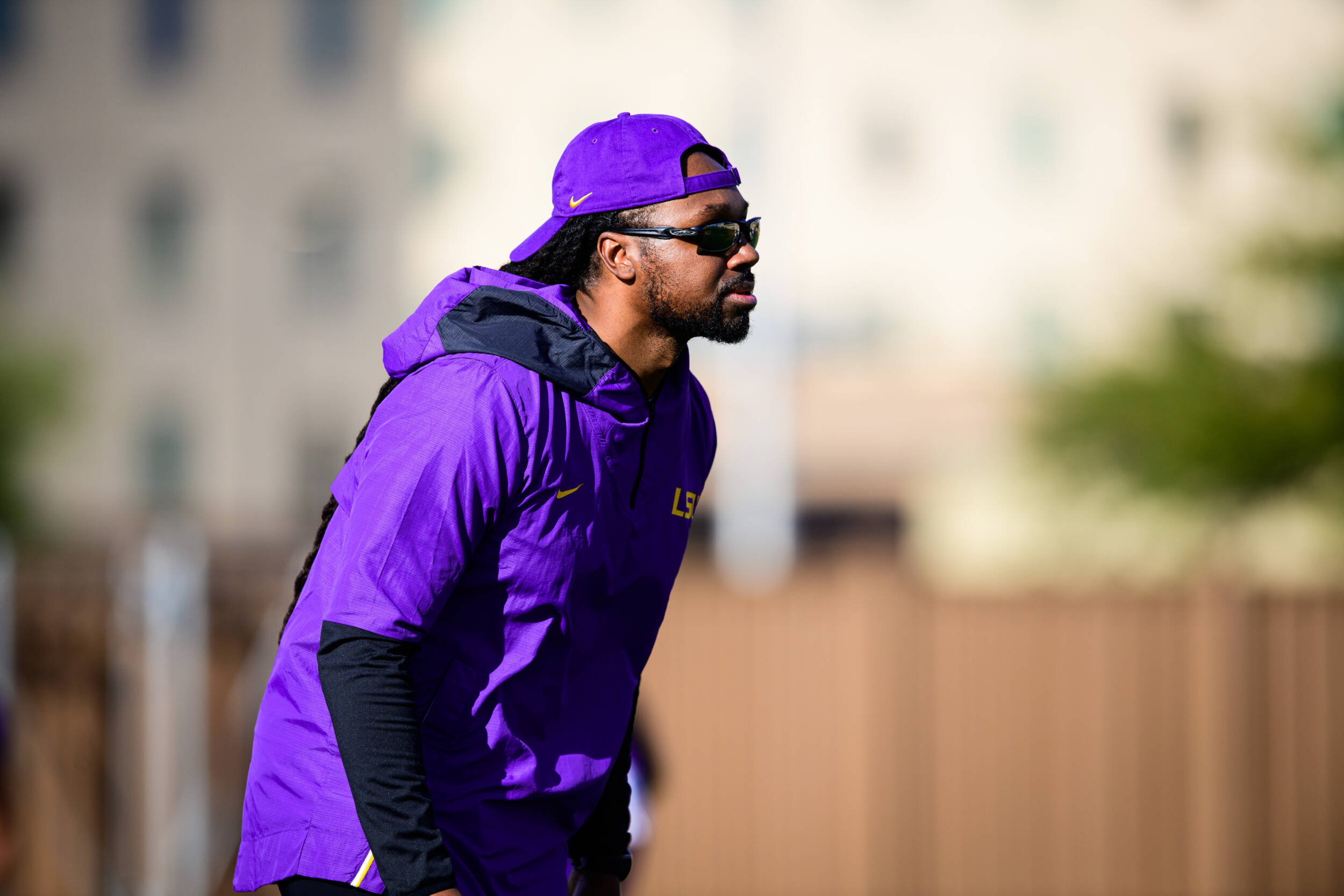 Emily Dixon: First of all, welcome to LSU. Why was it the right move for you going from the NFL to LSU right now?

Robert Steeples: It made a ton of sense as far as alignment. Coach Kelly and I, as far as our thought process on developing young people, my wife was an alum of LSU. I’ll say this: LSU is known for its food, and I’m a huge foodie. But what I’ve come to find out is that Louisiana and LSU’s community is more than just its food. It’s an authentic pride. It’s a genuine passion. There’s this eager hospitality there to make everybody feel welcome and like family. That all bundled up shows in its food, it shows in how they cheer on the football program, it shows how everyone assists each other with everyday activities. That southern hospitality was also what made me excited to be here, coupled with the passion.

ED: So how’s the transition been coming from Minnesota down to LSU?

RS: The weather has been a huge jump, obviously. Working with professional athletes in the NFL, and then coming here and seeing young men that look up to him has been awesome. But you find that there’s a lot of carry over. Like I say, the young people here in college want to be respected and valued just like the NFL athlete. Coach Kelly runs his program at a high level similar to the professionals.

ED: Speaking of Coach Kelly, how would you describe the culture and team Brian Kelly wants to build here at LSU?

RS: I would say intentional. I would describe it as this: within our football program under Coach Kelly, character is currency. If you have a high level of character, you can cash in, and we’re going to do everything we can to celebrate you. I think when people think discipline, they just think of pointing out the negative points. We obviously identify those, but also we celebrate our guys and with his SWAT team and things that he’s doing like that, character is currency, and then our guys are having an opportunity to be rewarded for that at a high level.

ED: It’s your first college coaching position, with a whole new defensive staff, what’s it been like getting to know everyone and making sure y’all are all on the same page as a defensive staff?

RS: It’s been awesome. I think the first thing I noticed when I was coming here is I got a lot of guys with a ton of experience to learn from. Just making sure I’m being humble in my approach, and then also continue to be my authentic self. There’s things from my journey that I take confidence in as well that I want to point to. My guys in my room, and then also just bringing juice. I enjoy doing that – bringing value to our guys. We’ve got a great group to work with. I think we’ve been a good match so far.

ED: Your career journey has included a lot of success and you won multiple high school head coach of the year awards, to turning a losing program into an undefeated state champion, what takeaways do you take from that experience and bring to LSU with that championship mentality?

RS: I think the value of ownership, being as clear as possible to our student-athletes as far as what their role is and their own success. Then, also on my end, we stress, hard work. It’s my job as a coach to meet them at the coaching equivalent of their hard work. I can’t make any tackles anymore. I can’t score any touchdowns or get any interceptions. I can’t lift any weights that make them any stronger on the field. But what I can do is meet them at the coaching equivalent at a minimum, as far as their hard work, whether that’s putting in extra work, making sure things are clearly communicated to them. Then also just making sure that they’re motivated each and every day as they come out onto the field and also going into the classroom.

ED: What’s your approach when it comes to building relationships with a whole new group of players in your position room?

RS: Initially, when I came in, letting them know the clarity and my purpose as far as while I’m here to work with them, but then also do in a respectful manner. They’ve been great with that. Then honestly, with me, it’s just about being intentional. You can’t fake it. I’ve been the stud athlete, I’ve been the benchwarmer. I know what it’s like to have a conditional relationship with your coach and I don’t want them to have a conditional relationship. They’re going to get the same me every day – it’s going to be an honest me. On both ends of things. They’re doing the same. They’re giving me their authentic self as well.

ED: If we went and talked to some former players, how do you think they would describe you as a coach?

I think it’s a laid-back demeanor with the fire that’s burning. I’m very adaptable. But I would say meticulous. I really do enjoy the process. I used to think I wanted to be an architect. Then I saw the angles and the math and I realized it was not architecture that excited me, it was the building process. Coaching football, it’s like architecture just with young people. That’s what I’ve been able to do, just try to be a meticulous builder in the day-to-day process, and just try to be an extension of their households. That’s also Coach Kelly’s vision for the football program.

ED: As we continue to make our way through spring ball, what are some of the main things you want your group to focus on, accomplish and build upon?

RS: First off, is there accountability? Competing the right way. Giving the team a good attitude. I like to play chess on the island. IQ. Really been stressing them to have an IQ in the mindfulness of just knowing what your assignment is and giving thought to that before you take the field. But also playing fast as well. I want to equip my guys with tools that fit them best. I would say a big thing that we’ve been working on is not just being an expert on the scheme, but also having them become an expert on their individual abilities and how it pertains to the scheme. That’s really been a big thing for me as a coach. Not just this is what we do and force you into that box, but this is how your skillset fits into that box. There is no personalization when it comes to effort, we need that. We need a good attitude. We need high IQ. We’re learning that process as it goes.

ED: You’ve gotten to see the “NFLSU” brand firsthand being in Minnesota, how have you seen the LSU brand and with having so many guys in the league, grow since you’ve seen it as a player and then see it on the coaching side?

RS: I’ve seen it from a marriage side. My wife, for the past eight years, has been raving about LSU. I’d take her to a Monday night football game and she said that was loud, but that wasn’t LSU loud. I would take her to a college game and she would say that was fun, but that wasn’t LSU fun. Just hearing her rave about this standard, she carries that same passion that the rest of the community does. Seeing NFLSU, you can’t deny the tradition that comes with this program, and especially with the defensive back group. I see that as an exciting opportunity. I think the guys that come here, they’re competitors, and not everybody’s built to accept that challenge of being part of a program that has become known as NFLSU this year. I think our guys are ready for the challenge, and I wouldn’t be here if I wasn’t myself.

ED: Lastly, what do you do when you’re not coaching football?

RS: I like to cook. My mom always says “son, if you got a passion for eating, you better have a passion for cooking.” So, during the offseason, I like to cook, spend time with my daughter and my son, and just hang out with my wife and do stuff like that. Getting family up here is awesome. So that’s what I spend a lot of my time doing.