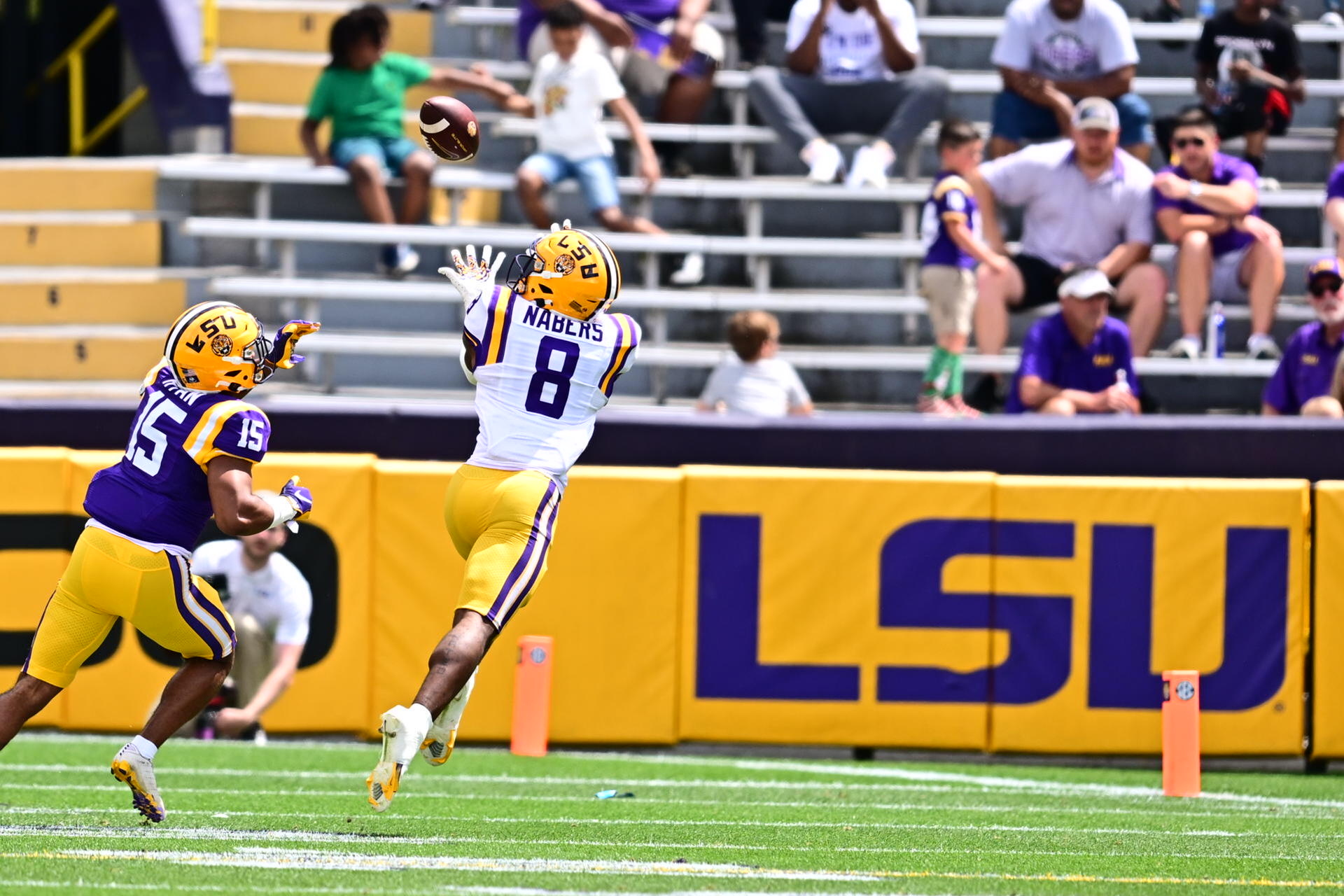 BATON ROUGE – Sophomore quarterback Garrett Nussmeier connected with sophomore receiver Jack Bech on an 8-yard touchdown pass to open the second half and the White team never surrendered their lead the rest of the way, defeating Purple 59-31 in the annual L Club Spring Game presented by Tony Chachere.

The format for this year’s game featured a different look with an offense vs. defense scrimmage. While the offense tallied points like normal, the defense had their own point system.

Turnovers, sudden changes or stops counted for three points, as did a three-and-out, while 3rd or 4th down stops accounted for two points, and a sack, TFL or a rush of -2 yards or more represented just one point.

With 10:43 in the first quarter, sophomore kicker Ezekeal Mata connected on a 48-yard field goal to get the White team on the board. The score was 8-3, Purple.

Sophomore running back Armoni Goodwin posted a 10-yard touchdown to cut the deficit and make it a 16-10 game, cashing in a 12-play, 74-yard drive that spanned four minutes and 21 seconds.

In his first appearance in a Tiger uniform, junior quarterback Jayden Daniels found sophomore Brian Thomas for a 39-yard connection, setting up a QB keeper and a 1-yard score from Daniels with 11:31 remaining in the second quarter. Purple remained in control, up 26-17.

With 7:11 to play in the second quarter, Josh Williams rushed to the left for a gain of 7 yards and a touchdown to make it 26-24 Purple. Shortly after, with 2:50 remaining in the half, Nussmeier found Wiliams again for a 27-yard pickup and, on the next play, Williams punched it in for a 1-yard score to put White up 31-28 with 2:20 to play.

The White team opened the second half with a handful of explosive plays, highlighted by a 30-yard rush from Tre Bradford, a 30-yard connection from Nussmeier to Malik Nabers, ending with an 8-yard touchdown pass from Nussmeier to Bech, putting White ahead of Purple, 38-28 with 12:12 to go. The White team never let go of that lead and would go on to capture the spring scrimmage.

Bech continued to make plays with another touchdown reception, this time from a 20-yard pass by way of Daniels with 6:27 remaining in the third quarter, to extend White’s lead to 45-28.

Nussmeier finished 9-for-16 with 136 passing yards and a touchdown. Myles Brennan went 11-for-17 with 99 yards and a score. Bech led the receivers with 6 catches for 56 yards and two touchdowns. Bradford led the tailbacks with 86 yards (LNG 37), averaging 9.4 yards per carry.

The defense jumped out to an 8-0 lead thanks to three sacks, a three-and-out and a third down stop. The sacks were recorded by Maason Smith (x2) and Desmond Little.

Tackles for loss from Penn, Joe Foucha and sacks from Bryce Langston and Quincy Wiggins extended Purple’s lead to 14-3. The energy was felt early from the defense.

B.J. Ojulari recorded a sack, the defense forced a three-and-out and Wiggins recovered a fumble on the next possession to make it 26-10, Purple.

A 4th down stop and a three-and-out gave the defense 31 points to end the scoring for the unit.

The Tigers now will concentrate on the end of the spring semester as the team turns their attention to the start of the 2022 football season on Saturday, September 4, at the Superdome in New Orleans for the Allstate Louisiana Kickoff.

Accomplished what we needed to. Spring 2022 is all wrapped up. pic.twitter.com/eMrU6KRSHK

“I wanted to see how our guys reacted to a game-like atmosphere. I thought our defense came out with the right mindset. They came out with energy. I did not think our offense did. We had to get them thinking right at halftime, and you saw the result of that. They came out in the second half with a better mindset. Those are important things. You want to get those accomplsihed in those kind of scenario. I don’t want to do that in the opener. From that perspective, mission accomplished.”

On the running backs…

“Those backs run really hard. You better tackle them. You better get our backs on the ground. You saw that today. They catch the ball out of the backfield. We will conitnue to work on some things that, in my eye, are some weaknesses. But they bring some traits across the board that are highly competitive in this league.”