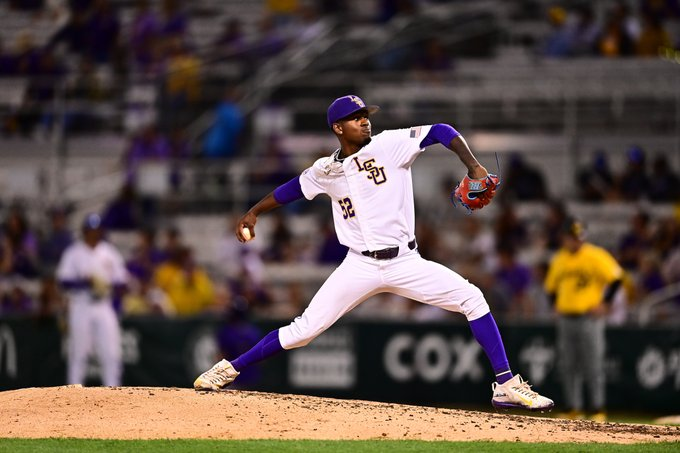 The teams resume the series at 6:30 p.m. CT Friday in a game that will be broadcast on the LSU Sports Radio Network and streamed on SEC Network +.

Hilliard (4-0) limited Missouri to two runs on seven hits in seven innings with no walks and five strikeouts, firing 104 pitches.

“Ma’Khail was outstanding, I can’t even fathom where our team would be without him,” said LSU coach Jay Johnson. “He did a great job again tonight, and I just feel like we’re going to win every time he pitches.”

Missouri starter Spencer Miles (2-4) was charged with the loss as he surrendered five runs on 10 hits in 5.2 innings with two walks and four strikeouts.

Berry was 3-for-4 at the plate with two homers, two RBI and three runs scored. His first homer gave the Tigers a 1-0 lead in the first inning, and his second dinger – his 12th of the season — tied the game at 2-2 in the third.

“Jacob hit three different pitches about as well as you can hit those pitches,” Johnson said. “He showed he’s one of the best hitters in the country; his mindset is great, he’s working his tail off, and I’m sure glad he’s here.”

LSU broke the 2-2 tie in the fifth with a three-run outburst highlighted by second baseman Cade Doughty’s RBI double and a two-run single by first baseman Tre’ Morgan.

Right-hander Paul Gervase worked the final 1.1 innings for LSU, earning his third save of the season. Gervase retired all four batters he faced, recording two strikeouts.