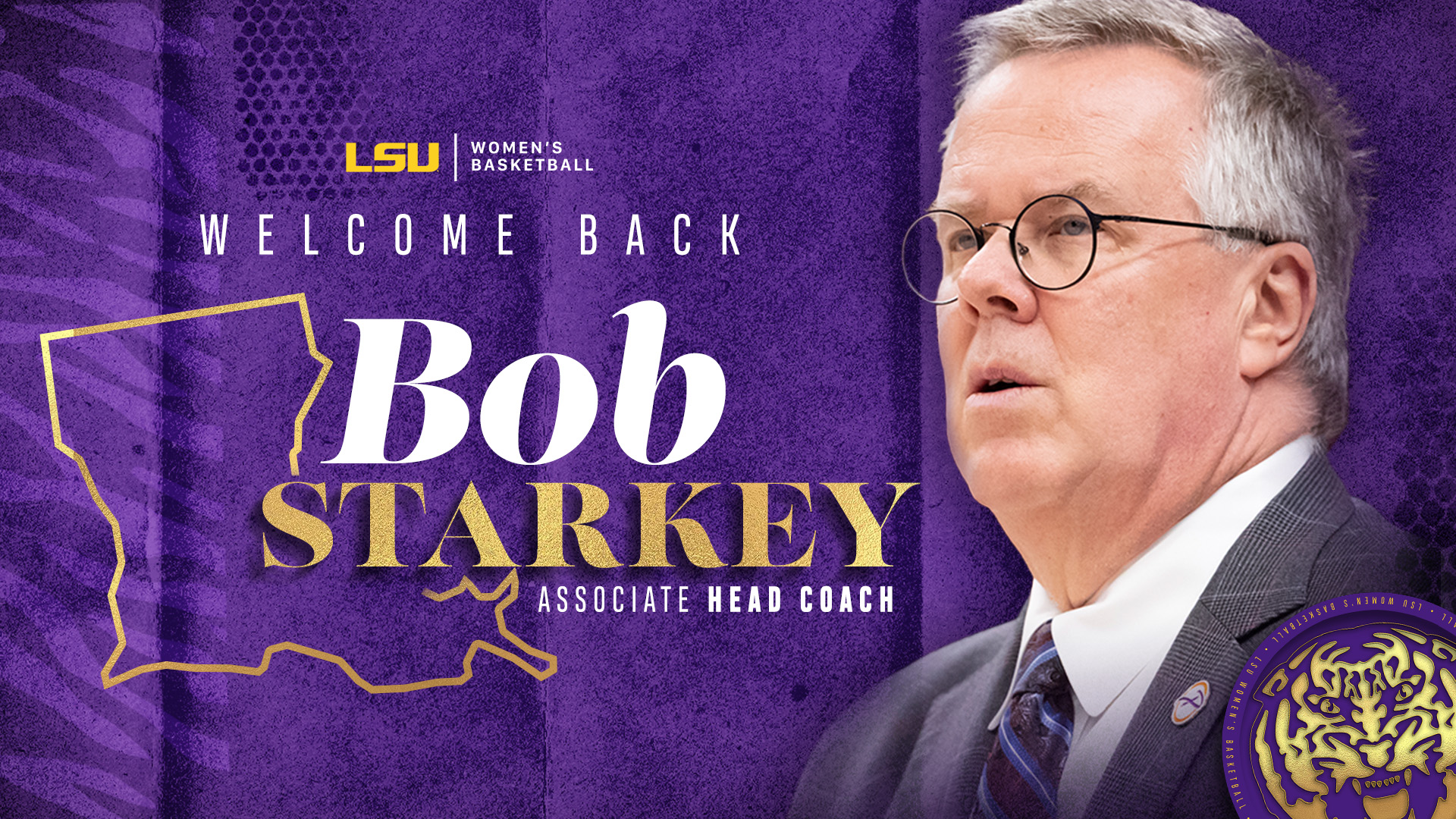 BATON ROUGE – Bob Starkey, who was on the LSU’s Women’s Basketball coaching staff during five Final Four appearances, will return to Baton Rouge and serve as the associate head coach on Coach Kim Mulkey’s staff.

“We are excited to bring Coach Starkey back to Baton Rouge where he previously had so much success,” Coach Mulkey said. “Throughout his entire coaching career, he has excelled and has built a great track record of success winning basketball games and coaching elite players. Just like he did during his first stint at LSU, we expect Coach Starkey will help lead our program to great heights in the coming seasons.”

With more than 30 years of SEC coaching experience, Starkey comes to LSU after one year of coaching at Auburn. From 1989-2011, Starkey coached at LSU with tenures with both the men’s and women’s programs. He coached LSU greats Mahmoud Abdul-Rauf, Seimone Augustus, Sylvia Fowles, Temeka Jonson, Shaquille O’Neal and Stanley Roberts during his original 22-year stint in Baton Rouge.

“I’m extremely humbled to have the opportunity to return to LSU and work with Coach Mulkey,” Starkey said. “Having previously been here for 25 years made Baton Rouge home for me and my wife (Sherie) and it’s beyond special to work with a Hall of Fame coach that has dramatically returned the magic to the PMAC.  Simply put, it’s great to be home!”

Prior to his one season at Auburn, Starkey was at Texas A&M for nine seasons where he served as an assistant and helped coach the Aggies to the 2021 SEC regular-season title.

Starkey has had a decorated career, having been a part of 790 collegiate victories, 24 NCAA Tournaments, eight trips to the Elite Eight and five straight trips to the Women’s Final Four (2004-08). He served as the acting head coach for LSU during its 2007 Final Four run.

His former players have gone on to distinguished post-collegiate careers, including both an NBA Finals MVP, Shaquille O’Neal (2001, 2002), plus two WNBA Finals MVPs, Seimone Augustus (2011) and Sylvia Fowles (2015, 2017). Ten of his players have been drafted in the First Round of the NBA or WNBA Draft, including top five picks Augustus (first overall), O’Neal (first), Fowles (second), Mahmoud Abdul-Rauf (third) and Kelsey Bone (fifth). Seven of his players were named NBA or WNBA All-Rookie during their first year in the league.

One of the best defensive coaches in basketball, Starkey’s teams have allowed less than 60 points per game since 2004-05. In seven of those seasons, Starkey’s team has ranked among the top 10 nationally in points allowed per game, and seven of his players have been named to the SEC All-Defensive team, since the conference started naming that team in 2007-08.

In his first role at LSU, Starkey served as an assistant coach for Dale Brown on the LSU men’s basketball staff from 1990-96, during which time the Tigers participated in four NCAA Tournaments. While on the men’s staff, Starkey worked closely in developing three first-round NBA draft picks in O’Neal, Abdul-Rauf and Stanley Roberts. As a recruiter, he helped sign three nationally-ranked recruiting classes, including one which was rated No. 1 in the country.

In his collegiate coaching tenure, Starkey has worked with 20 teams that have won at least 20 games and has been a postseason participant 20 times.

Before his extended stretch at LSU, Starkey spent one year as an assistant at Marshall during the 1988-89 season and three seasons as a men’s assistant coach at West Virginia State from 1984-87. In his final season at West Virginia State, he helped guide the Yellow Jackets to conference and district titles on their way to the NAIA National Championship game.

Starkey began his coaching career as an assistant at Winfield High School in West Virginia.

Heavily involved in charitable causes, Starkey serves on the board of directors for the Kay Yow Cancer Fund, A STEP UP, and the H.O.P.E. Foundation.

Starkey, who considers himself a full-time student of the game, has written numerous articles and has authored such basketball books as The 2-3 Match-Up Defense and Motion Offense. His latest project is a Basketball Coaching Series of books that include The Art of Being An Assistant Coach, The Art of Scouting and The Art of Motivation. Starkey is a master motivator and runs his own coaching and player online blog that features daily updates at hoopthoughts.blogspot.com.

Starkey is originally from Charleston, W.Va., and is married to the former Sherie Hayslett, also a native of West Virginia.