First pitch for Game 1 is set for 7 p.m. CT in a game to be televised on ESPNU and broadcast on affiliates of the LSU Sports Radio Network. 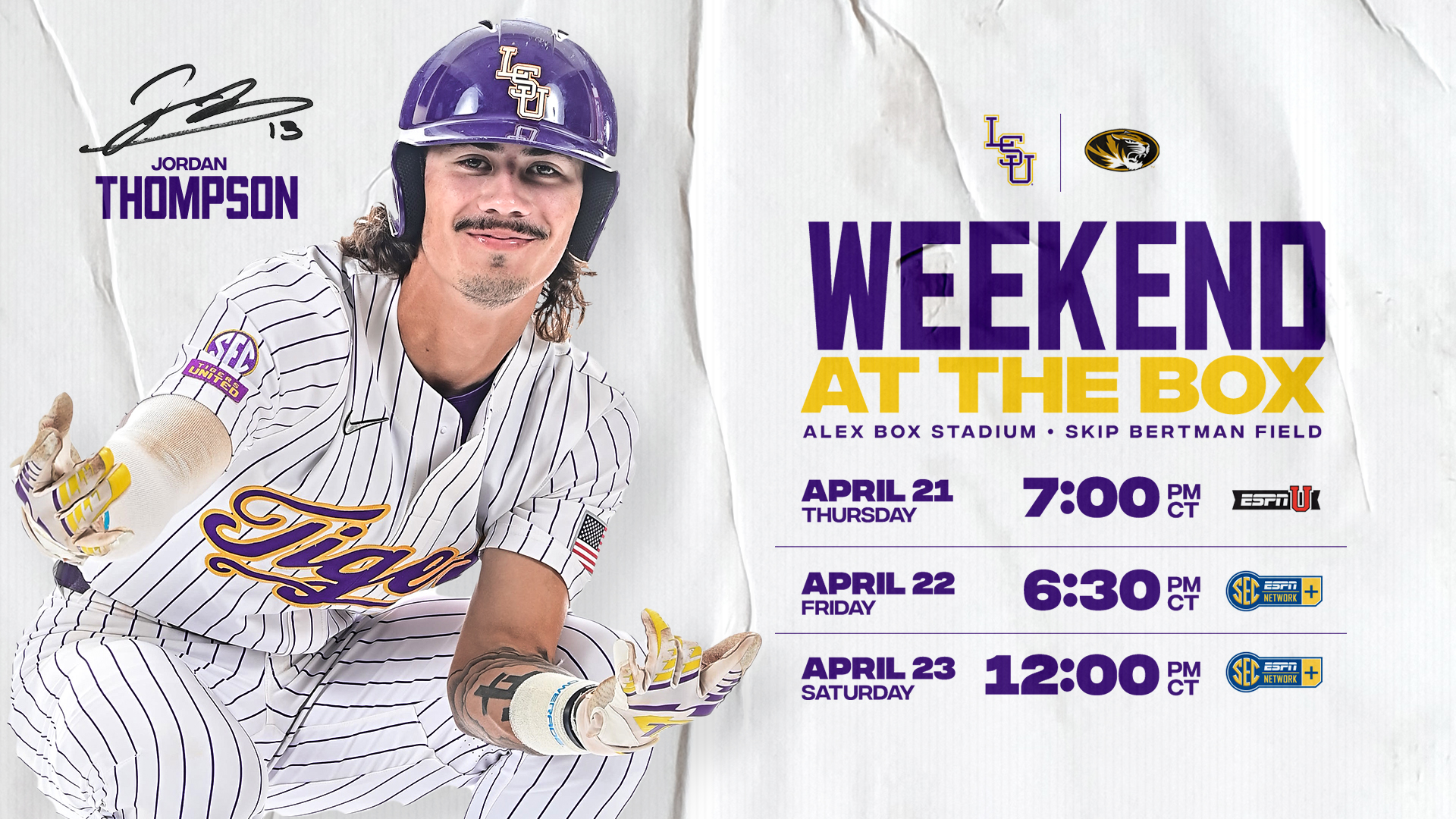 QUOTING COACH JAY JOHNSON
“Missouri is having a good year right now; it seems like they’ve got their culture in place and their guys are competing. They have good arms on the mound and athletic position players, so I’m expecting a battle this weekend. I don’t expect this to be any different than any other SEC weekend that we’ve played. It’s the most important one, because it’s the next one. We’ve been hanging in there, and I’m proud of our team for that. Now, it’s about continuing to improve, attack these games and try to win every one of them.”

ABOUT THE LSU TIGERS
• LSU begins Week 6 of SEC play by playing host to Missouri at 7 p.m. CT Thursday … LSU, which is 7-8 in the SEC, is in fifth place in the Western Division, but the Tigers are only one game out of second place in the division.
• Shortstop Jordan Thompson’s two-run homer highlighted a five-run fourth inning Tuesday night as LSU posted an 8-4 win over UL Lafayette in the Wally Pontiff Jr. Foundation Classic at Alex Box Stadium, Skip Bertman Field … LSU starting pitcher Ty Floyd (4-2) earned the win, limiting the Cajuns to two runs on four hits in five innings with no walks and eight strikeouts.
• LSU’s batters have been hit by a pitch 77 times through 36 games of the regular season; the Tigers are No. 4 in the nation and No. 1 in the SEC in batters hit-by-pitches, and the next-closest SEC team in that category is Missouri with 59 HBPs.
• LSU is near the top of the SEC in several offensive categories, including batting average (No. 3 – .294); slugging percentage (No. 2 – .510); on-base percentage (No. 2 – .409); runs scored (No. 2 – 300); RBI (No. 2 – 281); doubles (No. 3 – 76); home runs (No. 5 – 59) and total bases (No. 3 – 630).
• Senior right-hander Ma’Khail Hilliard delivered a solid start in last Thursday’s game at Arkansas, working five innings and limiting the Razorbacks to one earned run on three hits with four walks and five strikeouts … sophomore right-hander Blake Money turned in the longest SEC outing of his career last Friday against the Razorbacks, as he pitched 6.2 innings and allowed four runs on seven hits with two walks and one strikeout.
• Freshman right-hander Samuel Dutton provided an excellent start to last Saturday’s game for the Tigers, pitching four innings and limiting Arkansas to one run on two hits with two walks and two strikeouts … sophomore left-hander Riley Cooper made two appearances in the Arkansas series and recorded six strikeouts in 3.2 innings.
• The LSU pitching staff is near the top of the SEC in a number of categories, including ERA (No. 4 – 3.50); opponent batting average (No. 4 – .222); fewest hits allowed (No. 4 – 267); fewest walks allowed (No. 4 – 127); fewest runs allowed (No. 4 – 158); and fewest earned runs allowed (No. 4 – 124).

ABOUT THE MISSOURI TIGERS
• Missouri has won three straight games, including the final two games of its SEC series last weekend versus Kentucky and a win over Missouri State on Tuesday night … Missouri is tied with Kentucky (5-10) for sixth place in the SEC Eastern Division.
• Missouri is No. 9 in the SEC with a .287 team batting average, and the Tigers have launched 35 homers while recording 49 steals in 56 attempts … Missouri’s pitching staff is No. 11 in the league with a 5.16 ERA.
• Infielder Torin Montgomery leads the Tigers with 30 RBI on the year, and he’s batting .351 with 10 doubles and three homers … infielder Luke Mann has a team-high nine homers, and he’s second on the club with 27 RBI … infielder Josh Day is hitting .331 with eight doubles, one triple, six homers and 23 RBI.
• Missouri is No. 12 in the SEC in fielding percentage (.972) … right-handed reliever Austin Cheeley is No. 6 in the league in saves with four.