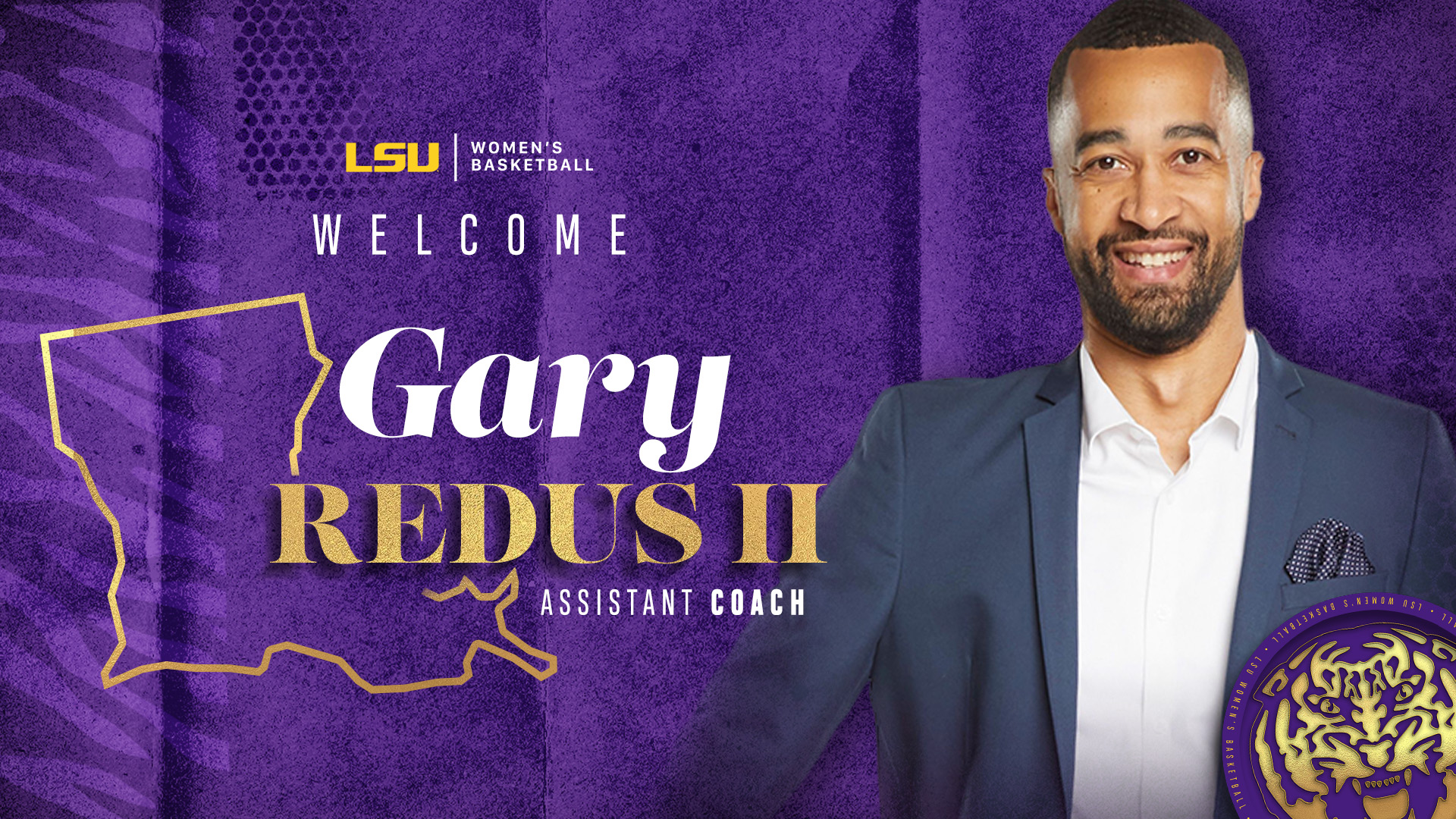 BATON ROUGE – Kim Mulkey has added Gary Redus II as an assistant coach to her coaching staff at LSU.

“Gary is someone I have watched from afar in the recruiting circuit,” Coach Mulkey said. “When talking with other coaches and recruits, he is always brought up in conversation. His infectious personality has allowed him to create and maintain meaningful relationships with his players and fellow colleagues. Being from an athletic family, his dad having played professional baseball for 13 years, a sister who played basketball in the SEC, a wife who played basketball in the ACC, Gary has a love for the game that shows and is evident in the energy he brings and the knowledge he displays.

“We look forward to him, his wife Tiffany and two kids, Gio and Ella joining our Tiger family here in Baton Rouge.”

After 22 seasons as a member of Coach Mulkey’s staff, Johnny Derrick will retire at the end of the Summer, allowing Coach Mulkey to readjust her staff. Redus, an up-and-coming coach and recruiter who was named to the 2020 WBCA “Thirty Under 30” list, will serve as an assistant coach and Coach Mulkey will also be adding an associate head coach.

“My family and I are ecstatic about joining the LSU family,” Coach Redus said. “I’m excited to be back in the SEC to recruit, coach and develop the next Marie Ferdinand, Seimone Augusutus and Sylvia Fowles. Working with a legend such as Coach Mulkey has always been a dream of mine and I can’t wait to help her lead this program back to its championship glory.”

Redus comes to LSU after one season as an assistant coach at SMU, helping guide the Mustangs to 14 wins. Prior the that, Redus established himself as an elite recruiter in the SEC during a three-season stint at Vanderbilt where he recruited and signed the programs first trio of top-100 prospects since 2016.

Prior to joining the staff at Vanderbilt, Redus served as an assistant at Delta State, a perennial Division II power in Cleveland, Miss. Redus worked under longtime head coach Craig Roden at the program started by Margaret Wade, the namesake for the NCAA Division I Women’s Player of the Year trophy.

Before embarking on his coaching career, Redus played four seasons of professional basketball overseas, with stints in China, South America and the Middle East. After his playing career, Redus served as a graduate assistant at West Georgia, where he earned a master of arts degree in special education.

Redus played two seasons at South Alabama, averaging nearly 10 points per game, and was a two-time selection to the Sun Belt Conference All-Academic Team. He earned a degree in health education from South Alabama in 2011.

Redus’ father, Gary, played 13 seasons of Major League Baseball, playing in the outfield for Cincinnati, Philadelphia, the Chicago White Sox, Pittsburgh, and the Texas Rangers. The son of Gary and Minnie, Redus is married to his wife, Tiffany, and the couple has a son, Gio, and a daughter, Ella.