The game is separate from the LSU season ticket package, so fans may purchase individual-game tickets now at LSUtix.net. 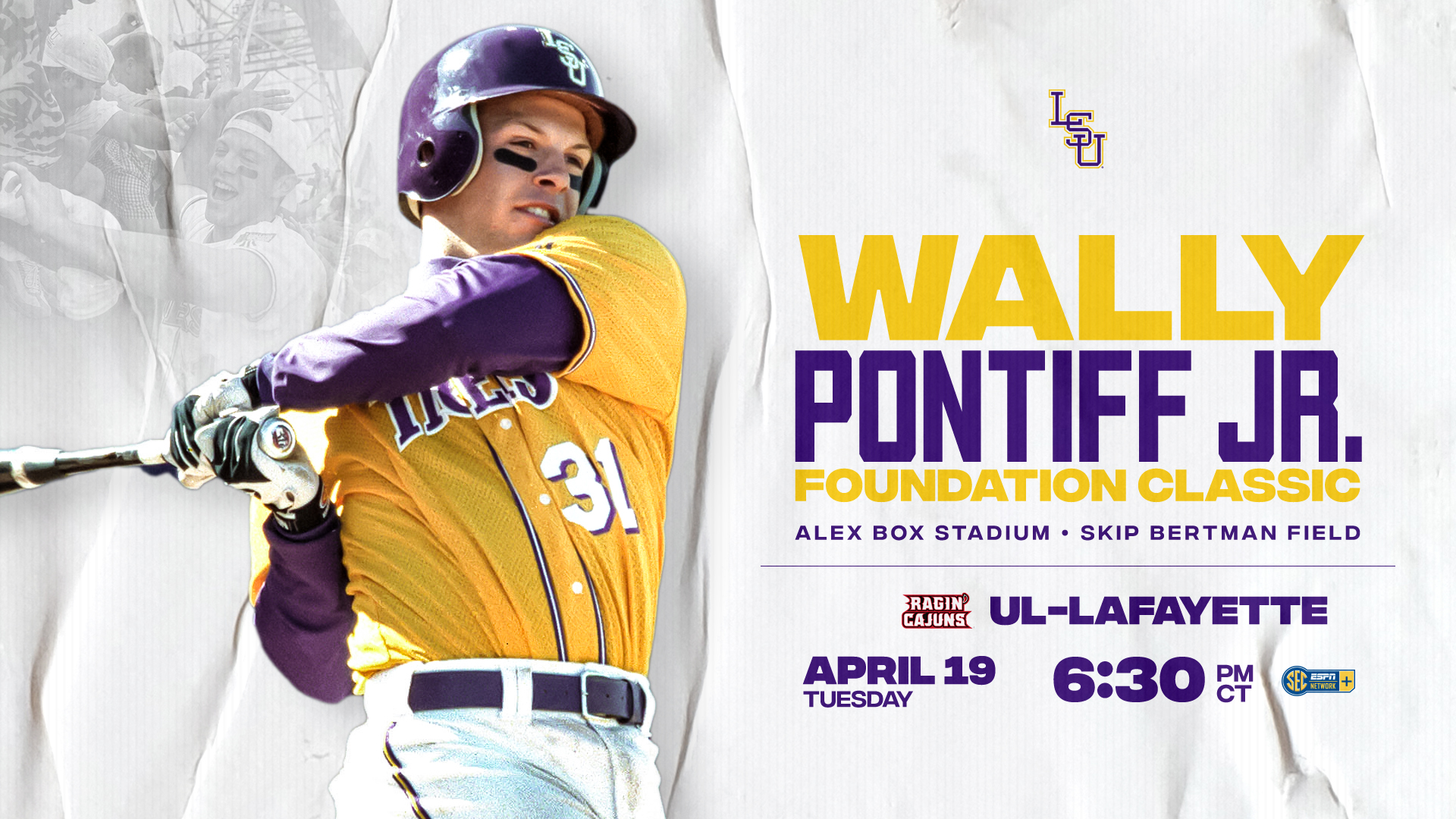 ONLINE
The game may be viewed live on SEC Network +

LSU SERIES RECORD VS. UL LAFAYETTE
• LSU leads the all-time series with UL Lafayette, 56-27, as the squads first met in 1912. LSU has won six of the last nine and 16 of the 24 meetings with ULL since 2000. The Tigers defeated the Cajuns, 11-2, last season (Feb. 24) to break the Cajuns’ three-game win streak in the series. Tuesday’s game marks the seventh time LSU and the Cajuns will meet in the Wally Pontiff Jr. Classic – the Tigers won the first four Pontiff Classic meetings over the Cajuns in 2009, 2015, 2016 and 2017 before UL-Lafayette captured Pontiff Classic wins over the Tigers in 2018 and 2019. All six prior meetings between the teams in the Pontiff Classic occurred at Zephyr Field (aka “The Shrine on Airline”) in Metairie, La.

ABOUT THE WALLY PONTIFF JR. FOUNDATION CLASSIC
• Proceeds from Tuesday’s game will go to the Wally Pontiff Jr. Foundation, which benefits charitable organizations throughout Louisiana. Wally Pontiff Jr., a 2001 and 2002 all-SEC third baseman at LSU, died in 2002 at the age of 21 due to a heart abnormality. Pontiff Jr. played at LSU from 2000-02, and he was the starting designated hitter for the Tigers’ 2000 College World Series championship team.

• Tuesday’s game marks the first Wally Pontiff Jr. Foundation Classic since April 16, 2019, when UL Lafayette posted a 6-5 win over LSU at The Shrine on Airline in Metairie, La.

QUOTING COACH JAY JOHNSON
“I’m very familiar with how great a player Wally Pontiff Jr. was here, a national champion and All-SEC player. He was part of the 2000 national championship team that was one of the best LSU teams in history. The purpose the Wally Pontiff Jr. Foundation is awesome, raising money for charities throughout Louisiana. We’re very excited to be able to participate in this cause again this season.”

ABOUT THE TIGERS
• LSU begins Week 6 of SEC play by playing host to Missouri at 7 p.m. CT Thursday … LSU, which is 7-8 in the SEC, is in fifth place in the Western Division, but the Tigers are only one game out of second place.
• Sophomore third baseman Jacob Berry was LSU’s leading hitter in the Arkansas series, batting .333 (4-for-12) with two RBI and one run scored … sophomore centerfielder Dylan Crews batted .308 (4-for-13) in the series with one double, one RBI and one run … freshman leftfielder Josh Stevenson batted .300 (3-for-10) over the weekend with one double and one run scored.
• LSU’s batters have been hit by a pitch 75 times through 35 games of the regular season; the Tigers are No. 4 in the nation and No. 1 in the SEC in batters hit-by-pitches, and the next-closest SEC team in that category is Missouri with 54 HBPs
• LSU is near the top of the SEC in several offensive categories, including batting average (No. 3 – .295); slugging percentage (No. 2 – .510); on-base percentage (No. 2 – .410); runs scored (No. 2 – 292); RBI (No. 2 – 273); doubles (No. 4 – 74); home runs (No. 5 – 57) and total bases (No. 2 – 615).
• Senior right-hander Ma’Khail Hilliard delivered a solid start in Thursday’s game at Arkansas, working five innings and limiting the Razorbacks to one earned run on three hits with four walks and five strikeouts … sophomore right-hander Blake Money turned in the longest SEC outing of his career Friday, as he pitched 6.2 innings and allowed four runs on seven hits with two walks and one strikeout.
• Freshman right-hander Samuel Dutton provided an excellent start to Saturday’s game for the Tigers, pitching four innings and limiting Arkansas to one run on two hits with two walks and two strikeouts … sophomore left-hander Riley Cooper made two appearances in the Arkansas series and recorded six strikeouts in 3.2 innings.
• The LSU pitching staff is near the top of the SEC in a number of categories, including ERA (No. 4 – 3.54); opponent batting average (No. 4 – .223); fewest runs allowed (No. 4 – 154); and fewest earned runs allowed (No. 4 – 122).

ABOUT THE CAJUNS
• UL Lafayette, which is 9-6 in the Sun Belt Conference, has won 11 of its last 15 games … the Cajuns won two of three games over UL Monroe last weekend in Lafayette in an SBC series.
• The Cajuns are hitting .258 as a team with 55 doubles, 14 triples and 28 home runs … UL Lafayette has stolen 79 bases in 98 attempts … OF/1B Carson Roccaforte leads the Cajuns with a .345 batting average, and he has team highs of seven homers, 40 RBI and 15 steals … outfielder Connor Kimple is second on the club in homers (5) and RBI (23) … outfielders Max Marusak and Tyler Robertson have 14 and 13 stolen bases, respectively.
• The UL Lafayette pitching staff has a 4.19 ERA with 334 strikeouts in 313.1 innings … the Cajuns are limiting opponents to a .243 cumulative batting average.