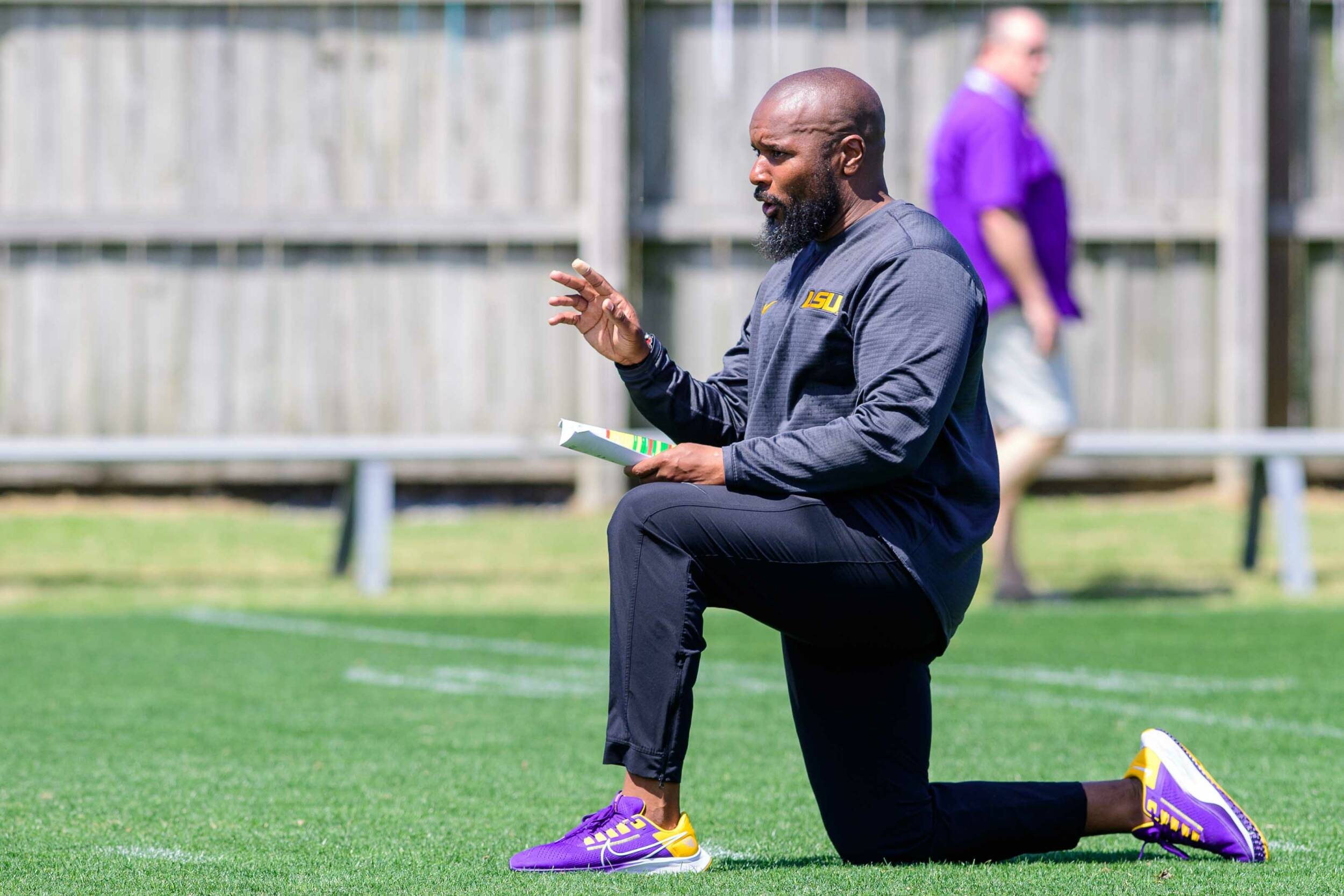 New defensive line coach Jamar Cain sat down with LSU’s Emily Dixon in an exclusive Q&A session. See below for the full transcript where Cain discusses his decision to join Brian Kelly’s staff.

Emily Dixon: Coach Cain, welcome to LSU and Louisiana. You come to LSU from a historically successful program. For you, why the move to LSU right now?

ED: How would you describe the culture and team Brian Kelly wants to build here at LSU?

JC: I think the culture that he’s trying to try to build is one of accountability, habits and traits and trying to make sure those daily habits and traits are transformed from the practice field to off the field. He had a vision and a plan. That was the biggest thing for me. Trying to implement that daily with our players. It’s been a fun process and something that is going to get turned around here. I’m excited to see that happen.

ED: LSU football fans are serious about their defense down here. When you’re working with the defensive line this spring, what are some of the things that are at the top of your checklist to accomplish through the 15 practices?

JC: I think the biggest thing is just trying to build trust with the kids. Trying to build a mentality of getting after the quarterback and stopping the run. LSU has a history of great defensive linemen. I’ve been told that throughout the community, just going to the grocery store or wherever I’m at. People have come up to me to say, “Hey, you’re the D-line coach. We’ve always had a history of good defensive linemen.” So trying to build off that history and making sure our guys understand the brand that we want to get around to our players.

ED: What’s your approach when it comes to now building a relationship with a completely new group of players going into this spring?

JC: I think it’s just me being myself. Let them know I understand and that I’m here for them. Trying to implement my system and trying to add instead of subtracting from what they are already. Now I just want to add and build off that. That’s been the biggest thing. It’s been my goal of these 15 practices to add, not take away.

ED: We went back and pulled some of your former players. How do you think they would describe you as a coach?

ED: What’s it been like getting to know not only all these new players, but all the other coaches on the defensive staff as you come together? As Coach Kelly keeps saying, to bring LSU back to the standard of the program?

JC: Well, it’s been fun because none of us have ever worked together. I’ve never worked with anybody on this staff and that goes from the equipment room all the way up upstairs. That’s been fun to understand everybody’s personalities, get to know Coach House, get to know Kerry Cooks, Robert Steeples — everybody that’s inside that room, it’s been really fun. Never worked with Coach Kelly, never even talked to him my whole career to the day he called me, so that’s been fun understanding our personalities and it’s going to change once the season gets here, but we’re all meshing together. That’s been a fun process.

ED: What was his pitch to you to come down here? How did he recruit you?

JC: Well, LSU recruits itself. First of all, I think he had a consistent, concise plan. That’s what sold me on this place. I knew that they were already loaded upfront. I knew what they already had, watching football games, watching LSU play. But I think Coach Kelly had a plan. His plan aligned with what I wanted to do with my career and where I wanted to take it. It wasn’t easy.

ED: You were a part of two FCS national championship teams at North Dakota State. What experience being a part of a championship program do you bring with you here to LSU?

JC: Daily, consistent grind every day, and it’s not easy. It’s not fun. I always tell kids that winning is fun. But getting to that goal, you have to do stuff daily that not everybody wants to do. One thing we did at North Dakota State that was always good was coaching the kids hard every single day, never giving up and we had to say keep coaching them and they’ll get better. That’s what I’m trying to bring here.

It's All About Competing

ED: How’s the overall transition been to Louisiana?

JC: I’ve got to watch my weight because I eat a lot. The fried food is unbelievable. The crawfish. I’m still trying to figure out how to eat that. Maason Smith keeps trying to teach me how to eat it and I can’t figure it out. You have to eat 10 pounds of it to get full. But the community has been awesome. My neighbors are great. Everybody’s been really, really welcoming. That’s southern hospitality. It’s really true. This is our first time living in the South. So it’s been a little bit different, but it’s been great.

ED: Lastly, what does Jamar Cain do when he’s not coaching football?