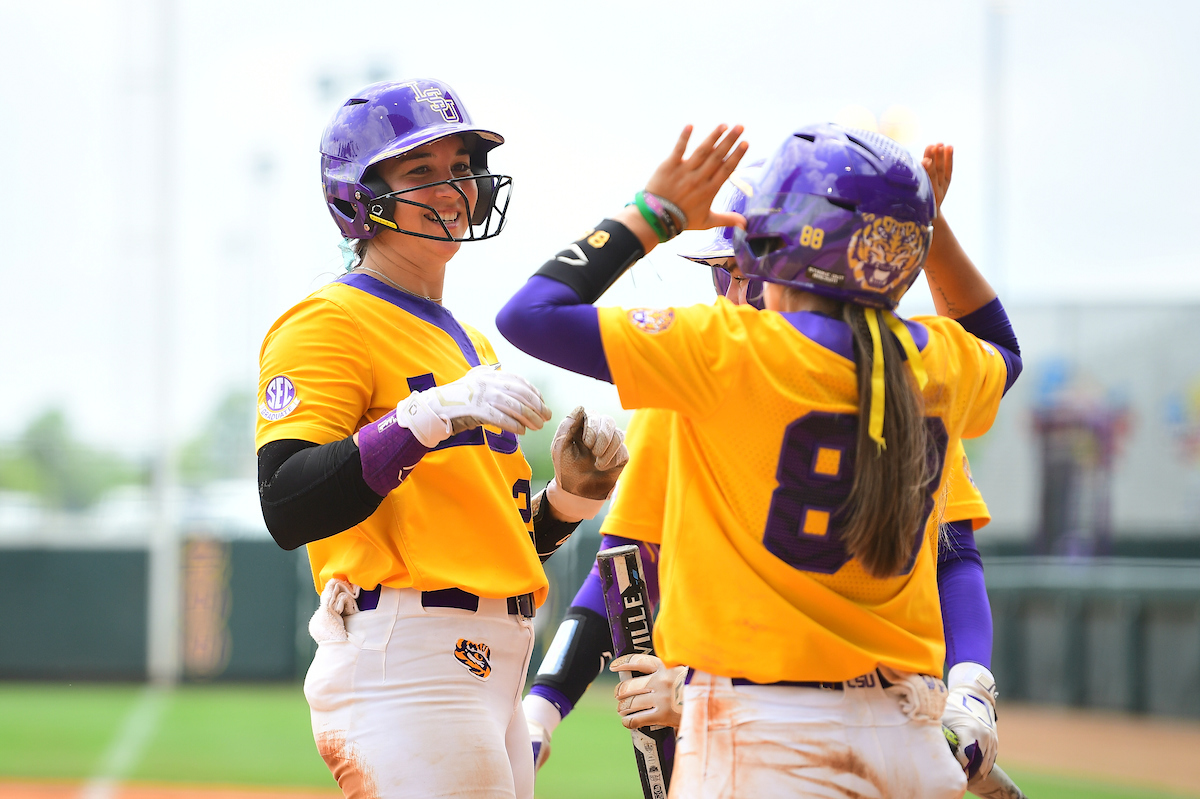 LSU dominated the weekend series in the circle as they concluded with its second shutout of the weekend. Overall, the Tigers recorded a 1.05 ERA and held the Gamecocks’ bats to a .186 batting average behind 23 strikeouts and allowed three runs in 20.0 innings pitched. Offensively, the Tigers had a .307 average with 23 hits and 15 RBIs.

Senior Shelbi Sunseri had a day in the series finale as she hit her 13th home run of the season and No. 46 in her career, while also logging her second shutout this season to improve to 6-6 in the circle. In her first conference win in 2022, Sunseri logged four strikeouts and allowed five hits and one walk in her fifth complete game.

Sophomore Ciara Briggs continued to rake at the plate as she finished with a 3-for-4 performance. Sophomore Ali Newland had a hit and led the team with three RBIs, and Sunseri had two RBIs in the win. Junior Georgia Clark and freshman McKenzie Redoutey each had one hit and one RBI, and sophomores Danieca Coffey, Taylor Pleasants, Raeleen Gutierrez, and junior Morgan Cummins each contributed a hit.

The Tigers earned their first SEC sweep of the season and turned in their first sweep against a conference team since sweeping Georgia in 2019. LSU has swept South Carolina nine times in the all-time series and six times in Baton Rouge. The last time the Tigers swept the Gamecocks was in 2016.

LSU struck first in the opening inning with three runs on three hits. Briggs and Pleasants singled, and Clark recorded an RBI bunt single to score the game’s first run. Newland reached on a fielder’s choice and was credited with an RBI, and Clark scurried home after a SC throwing error. Newland tallied her second RBI of the game on a groundout to the pitcher in the third inning to put LSU ahead, 4-0.

In the fourth inning, Briggs registered a leadoff single to the shortstop, and two batters later, Sunseri hit her second two-run shot of the series to extend LSU’s lead, 6-0.

The Tigers sealed the game in the bottom of the sixth inning as Pleasants opened the stanza with a walk. A couple batter’s later, back-to-back RBI doubles from Newland and Redoutey completed the game as a run-rule.

On the Tigers’ ability to win in different ways…

“We’ve talked about winning in a lot of different ways and we’ve shown that our team is capable of that. We’ve shown that we can do it all, so it’s nice to bring it all together in one weekend. That’s what we’ve really been searching for here all season long.

“She needed that. I think she needed a win, just personally, getting some confidence back. Everyone standing here knows how good she is. She’s very talented, and I think just kind of getting out of her own way and going back to just being herself, competing, throwing good pitches helped (her confidence) today.”

On the first sweep of the season…

“I think that the sweep wasn’t really what we were worried about. I think we were trying to take it one game at a time and put our best foot forward every game so we can get to where we want come postseason.”

On the shutouts for LSU against South Carolina…

“I think it’s indicative of how well-rounded we are as a team. We can do so many things well. It’s never on one person. If one part of the team is not necessarily having their best day, we know we have shut down stuff coming from the rest of the team. It’s never like ‘oh the pitching staff’s not doing well, we can’t win this game.’ We have so many ways to win and it shows up all the time.”

“I just kind of put the bat on the ball. I’ve been disciplined all weekend and I just took a guess on what was coming. It was there and it happened. I was trying to extend the inning and pass the bat to the next person.

“We don’t really focus on it. We try to focus on one game at a time. That’s our whole theme as Tigers. We have a process and it’s win one pitch, win the next one, and win the game. Then it’s win game two and win the series. I think really focusing on winning each pitch leads us to get a sweep. It’s a good spot for our team to be in. It gives us confidence to know that we can do this and we’re capable of being a great team. We have so much talent. It’s a good reminder that the work we’re putting in is paying off and it’s going to continue to pay off. We just see that little by little.”

LSU will begin a four-game road trip Tuesday, April 19 at McNeese before traveling to Athens, Ga. for a three-game series against Georgia April 22-24.