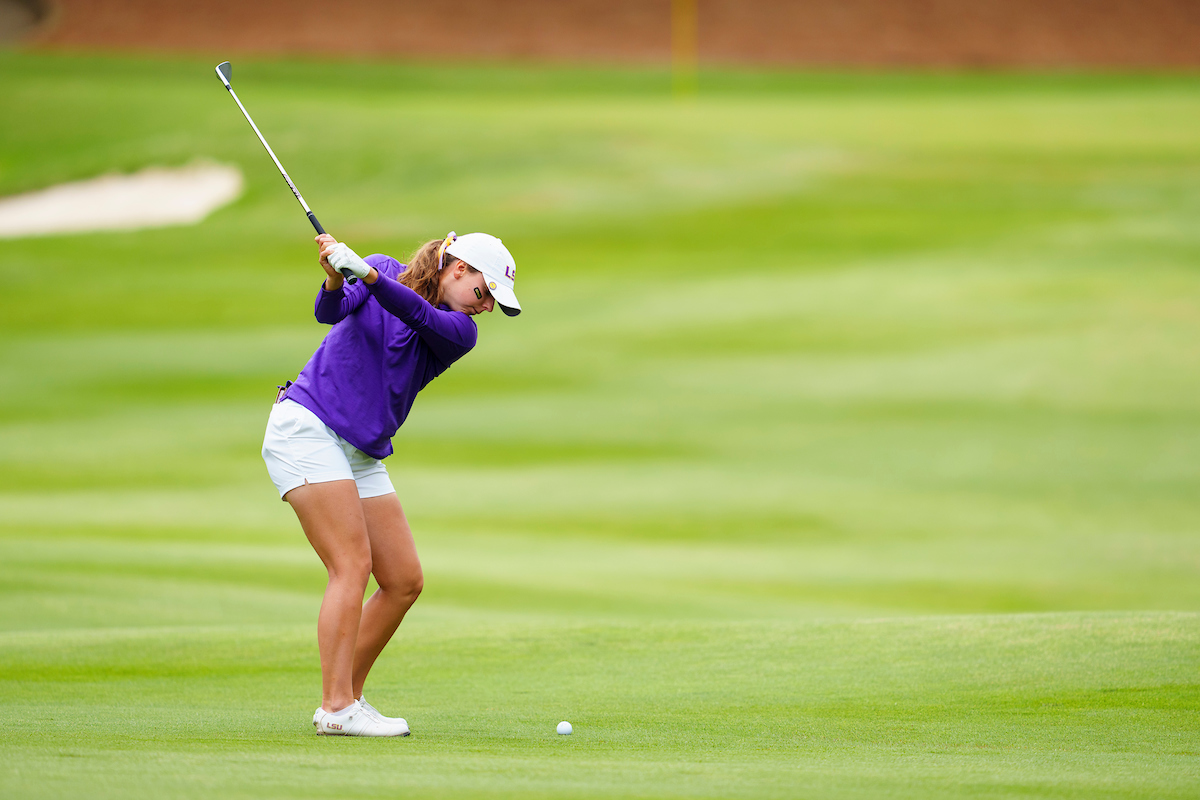 BIRMINGHAM, Alabama – LSU’s Latanna Stone rallied from one hole down with three to play to give LSU the clinching point in a 3.5-1.5 semifinal match play win over Alabama Saturday as the sun set on the Southeastern Conference Women’s Golf Championship at the Greystone Country Club’s Legacy Course.

LSU was able to get the three points necessary with wins from Carla Tejedo, Elsa Svensson and Stone. Ingrid Lindblad rallied to tie her match with a long birdie on the final hole and that match went to extra holes but Stone ended things before they could complete the first hole of sudden death so that match was deemed a tie.

The Tigers and the Florida Gators, which upset No. 1 seed Auburn, 3-2, in the other semifinal will now meet at 8 a.m. Sunday morning for the SEC Championship as the Tigers of LSU go for their first conference crown in 30 years. The match will be televised live on the SEC Network.

LSU earlier in the day needed just 30 minutes to finish off the rain delayed quarterfinals, 4-1, over Vanderbilt.

“That was a fun afternoon,” said Coach Garrett Runion, whose team will be making its first appearance in the finals since the tournament changed to this format, after losing in the semifinals in 2021. “It feels amazing. So now we have one more to go and let’s see if we can’t finish this thing off.”

Stone was able to tie the match and then on the par 3 eighth hole (the 17th of the match), she hit a strong tee shot and made the birdie putt to swing the match back in LSU’s favor.

It proved to be pivotal with Tejedo and Svensson both in with their second wins of the day. Alabama already had one win and the Tide’s Benedetta Moresco had turned the 2-hole lead of LSU’s Ingrid Lindblad into a one-hole deficit after 17 holes with some amazing play.

So, with the Lindblad-Moresco match on the final green and Stone and Polly Mack heading down the fairway, Lindblad kept Alabama from a potential second point by finally getting a birdie putt to drop after several near misses on the last nine to force extra holes which eventually weren’t needed.

Stone, then did what she needed to do and put her approach behind the hole and with Mack facing a fairly long birdie effort to tie the match, Stone two-putted for par and after Mack missed her putt, the Tigers were celebrating a victory in the post-sunset finish.

Coach Runion talked about his freshman Svensson who was able to tie the last three holes to win her match 1UP after her opponent, Angelica Moresco, cut her lead in half, including a par save from trouble on the final hole (the course’s ninth hole).

Svensson, on the last hole, hit the cart path with her tee shot and the ball went into the woods. But she showed her talents to get it home with a par after a nine-iron third shot and a 10-footer to halve the hole.

“Elsa came up huge after having to punch out of trouble and was able to get up and down from (129 yards) to win the match. Latanna played great. She came through in the clutch and that putt by Ingrid on the final hole to give us a little breathing room was what we’ve come to expect,” the coach said.

Florida, meanwhile on the other side of the course, was able to rally with two straight late birdies to win the final match on the course that broke a 2-2 tie.

LSU made quick work of Vanderbilt when play resumed Saturday morning in the SEC Quarterfinals. The resumption started some four hours late because of heavy thunderstorms earlier in the morning.

With one win for the Tigers when play concluded because of darkness on Friday, LSU was up one match with Carla Tejedo winning easily 4&3. LSU led in three matches but two of those were 1UP leads.

Elsa Svensson and Virginie Ding resumed on the 16th hole, a 337-yard par 4. But the match resumed on a course saturated by heavy overnight and early morning rains. Svensson hit her tee shot dead center of the fairway while Ding hit into the woods right of the fairway and had no shot but to chip out to a difficult downhill lie.

Svensson put her approach shot within 10 feet of the hole and would make her birdie to make the match 2UP with two to play, assuring a half-point for LSU.

The match moved to 17 and Ingrid Lindblad and her opponent, Louise Yu, moved to 16, with Lindblad dormie at 3UP with three to play. Svensson made another great tee shot on the par 3 17, while Ding was to the right of the green. While they moved to the green, Lindblad tied the 16th hole with a birdie pull to end that match 3&2 and give LSU a second point.

Yu left herself a long par putt and Svensson had two putts to win the match getting her point to win 3&1 and give LSU the insurmountable 3-0 lead.

In the other matches, Jessica Bailey gets a point for having a 1UP lead through 13 holes when that match was halted and Celina Sattelkau defeated Latanna Stone, 3&2.