Tigers Have The Lead In Suspended SEC Golf QF Match

Coach Garrett Runion discusses a shot in the match play competition Friday afternoon with Carla Tejedo, who won her opening match before competition was halted for the evening. 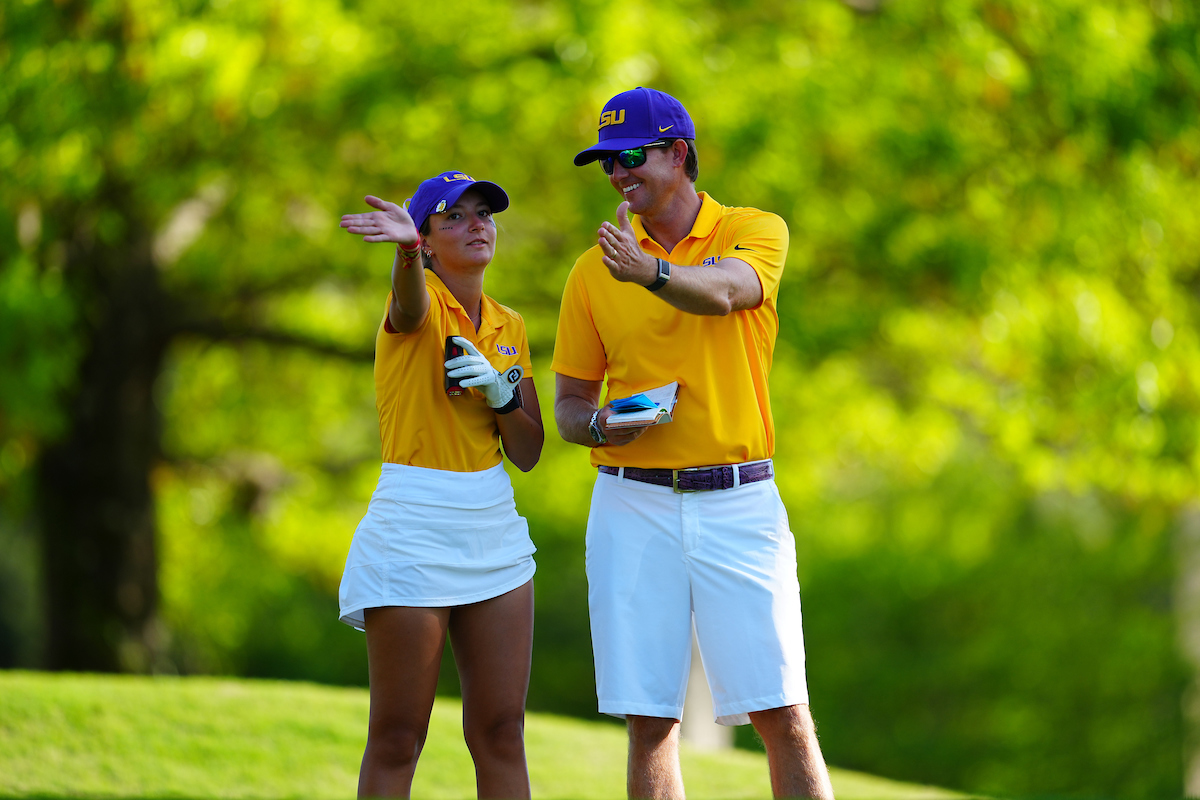 UPDATE (Sat., 7:15 a.m. CT): Quarterfinal matches will not resume until at least noon CT due to rain.

BIRMINGHAM, Alabama – After a solid final round of 2-under par that moved LSU to the No. 2 seed, the Tigers were on the verge of clinching their quarterfinal match with Vanderbilt as darkness suspended play after a full day of action Friday at the SEC Women’s Golf Championships at the Greystone Country Club’s Legacy Course.

LSU holds an official 1-0 advantage in the match, needing three points from the five matches to advance to the semifinals. LSU has the lead in three other matches, while Vanderbilt leads in one match.

The tournament schedule was altered Friday in an attempt to get as much play in with heavy rains forecast for Saturday morning when the quarterfinals were supposed to begin. The final team qualifying round was turned into a 9 a.m. shotgun start and the quarterfinals for the eight teams remaining began at 4 p.m.

The players were allowed to ride in carts to move things along and all the LSU matches were close to being finished when play was suspended at just before 7:30 p.m. CT.

Earlier in the day, junior Ingrid Lindblad eagled the 18th hole to shoot 66 and 10-under par 206 for the 54 holes to win the individual title.

Coach Garrett Runion put Carla Tejedo, Elsa Svensson and Lindblad out in the first three matches of the day and all three showed no effect from the long day.

Tejedo won the seventh hole to take the lead in her match with Vandy’s Tess Davenport for good and survived an 11th hole when both players bogeyed the par 5. Tejedo then advanced to three up with a par on the 12th hole and a bogey on the par 4 14th. A birdie on the 15 put the first LSU purple final on the board with a 4&3 win.

Svensson won the first three holes of the match with a birdie 3, a par 3 and a birdie 3 to go three up quickly, but Vandy’s Virginie Ding came back with wins at 11 and 13 to cut Svensson lead to 1UP after 13. The pair split the next two holes to keep the match at 1Up for the LSU freshman where they will start on the 16th hole.

Lindblad showed no letdown after the individual championship hoopla, winning the first two holes in her match with Louise Yu. with a birdie 3 and a par 3. She had as much as a 4UP lead, and led 3UP after 14 holes.

Jessica Bailey holds a 1UP lead in her match with Vandy’s No. 1 player Auston Kim in match five and Vandy will start Saturday in match four with a 4UP lead for Celina Sattelkau over Latanna Stone.

In the other quarterfinal matches, Auburn leads Tennessee, 1-0, with no matches finishes between South Carolina and Alabama and Florida and Ole Miss.

The earliest competition could start Saturday morning is at 8 a.m. There is an 80 percent chance of rain at times

The Golf Channel's Jim Gallagher Jr., interviews LSU's Ingrid Lindblad after her 2-under par round of 70. The junior finished the NCAA Championships tied for third.
Gallery: Women's Golf NCAA Championship - Round Four