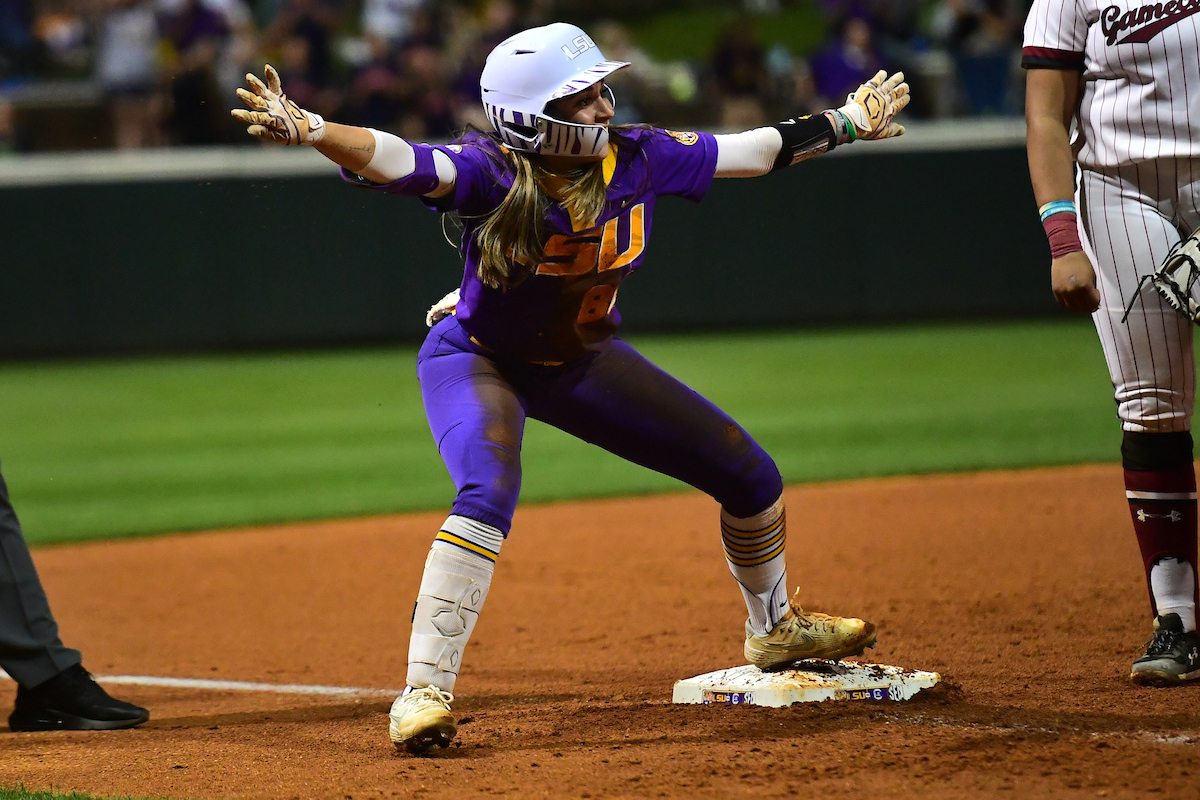 The win marks No. 20 for the Tigers at Tiger Park this season as they claimed the three-game series against the Gamecocks and earned their fourth conference win over a five-game span.

Freshman Raelin Chaffin improved to 5-2 in the circle as she dominated in relief. Chaffin shut out SC by striking out seven batters and allowed just one hit and no walks in 4.2 innings of work. Junior Shelby Wickersham got the start, logging two strikeouts in 2.1 innings and allowed four hits and three runs.

After two scoreless innings, South Carolina crossed three runs in the third to force an LSU pitching change. That would be all the Gamecocks’ offense could produce as they finished with one hit in the final four innings.

The Tigers responded with two runs in the fourth, highlighted by an RBI double from Coffey. Coffey also accounted for the second run as she crossed home plate thanks to a SC fielding error. In the fifth inning, another Gamecock fielding error scored sophomore Ali Newland to knot the score at three runs apiece, and later with the bases loaded, Briggs struck with a three-RBI triple to give LSU the lead. Pleasants followed Briggs’ at-bat with an RBI single through the right side that capped a five-run inning, giving the Tigers a 7-3 lead after five frames.

Chaffin continued to own the circle as she struck out four in the sixth and seventh innings combined, including the final out to end the game.

“She did a great job. She came out well prepared and did a good job of executing the plan, throwing hard, and hitting her spots.

On stranding runners early in the game…

“I think that was the story of the game early on. We had a lot of runners left on base to start, but in the back half we only had 2. Capitalizing on opportunities and some of their mistakes and things that were given is what gave us the lead.”

On her performance tonight…

“Their weaknesses were my strengths, so that’s always good as a pitcher when your best stuff is what they are the worst at. That’s why I was getting in my groove because I knew that was my best stuff.”

On her strengths as a pitcher…

“For me, it’s throwing hard. We knew the velocity would get to them as well as me hitting my spots, too. We knew that if I could hit a corner, that they would struggle on that. So, I would say hitting spots and throwing hard.”

On the approach at the plate…

“We’re just trying to use all our tools. We just wanted to stay in our plan with their pitching. Whoever it was, we just wanted to do us and just read the defense and whatever we can do to turn the lineup over.”

On her triple in the fifth inning …

“There are some days you just see the ball bigger, and I saw that one big and took my hack and it worked out for me in the end. Like I said, we put in the preparation, and it helped me out in the long run.”

The series will conclude with an 11 a.m. CT first pitch on Saturday, April 16 and will be televised on SEC Network.