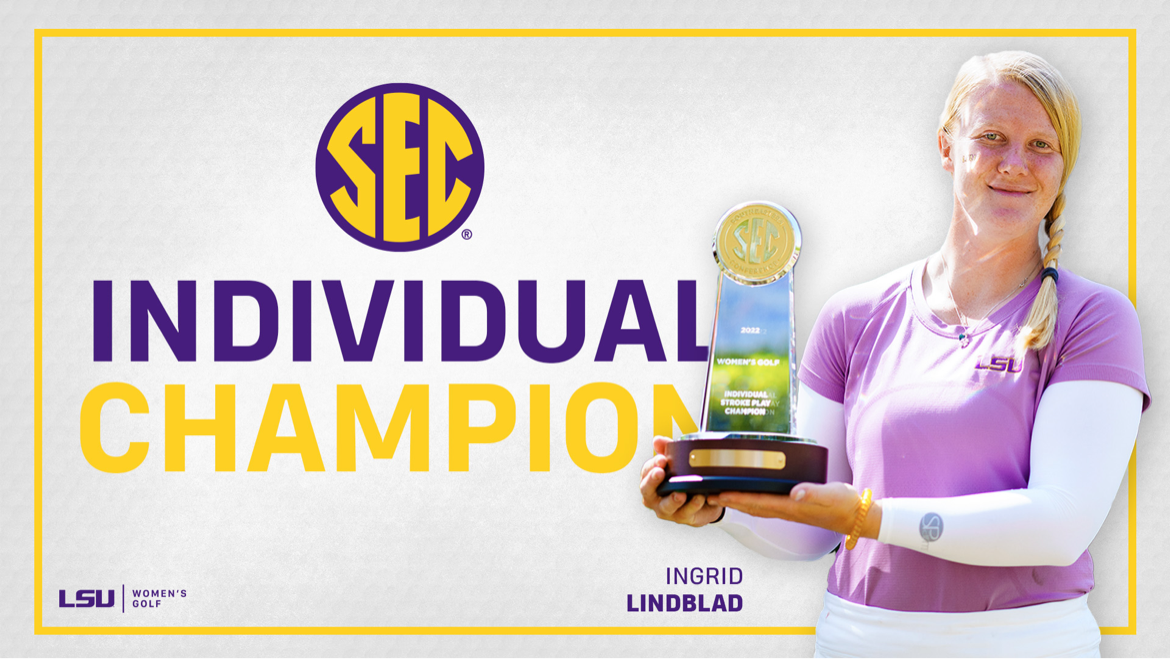 Lindblad rallied from third place at the start of the day with a 6-under 66 to finish at 10-under 206 for the 54-hole event.

LSU as a team posted a strong closing round of 2-under 286 to finish the team qualifying portion of the event in second place, easy making the top eight teams to advance to match play. Due to concerns about weather on Saturday, the final round was a shotgun start and the team quarterfinals were to begin at 4 p.m. and play until sunset at 7:18 p.m. CT. LSU would face seventh-seed Vandy in the quarterfinals.

Lindblad was down one stroke entering the final hole, a 478-yard par 5. Lindblad and Coach Garrett Runion looked at the yardage (some 220 yards) then appeared to look at Runion’s phone and possibly the Golfstat scoring, and Lindblad made the decision to go for it all after finishing second a year ago.

The day before with a different wind direction, Lindblad took a 6-iron and hit it over the green.

This time with the wind swirling against Lindblad, she took a 5-wood and took her best shot. The ball appeared to head right but faded back to the right corner of the green, leaving her a tricky putt of some 38 feet for eagle.

Lindblad, winner of a school record eight collegiate titles entering the event, left the flagstick in and she let it die right in the center for an eagle and what would be a one stroke victory.

Auburn’s Megan Schofill had a lengthy birdie putt that would have tied Lindblad but it didn’t go giving her the title. Schofill, who led after two rounds, bogeyed the 17th hole giving Lindblad the chance to eagle to win.

Kristi Coats was the last LSU winner of the SEC individual championship in 1991. Coats shot 224 to win the event in Lexington, Kentucky.

Lindblad has won four-of-five spring events and five tournaments in total in the 2021-22 calendar year. She now has added to her school record of nine collegiate event triumphs and solidified her spot at the top of the board in SEC stroke average this season. She is presently ranked No. 2 in the World Amateur Golf Rankings and is No. 3 in the Golfstat rankings.

Last year in the SECs, Lindblad posted a school record total of 14-under par and finished second, three strokes behind the winner.

“Last year, I shot 64 in the final round and came up three shots short. I really played well and I wanted to come back and get some revenge. Today, I got some revenge. I had a lot of fun out there this week. But to win and play good the last day is always something special.”

Lindblad had birdies on 3, 6 and 7 on the front nine and then after a bogey on 10, birdied 11 and 14 to set up the climatic and championship eagle.

In the final round, as a team, the Tigers also counted a very consistent 1-under round from Carla Tejedo, who shot a one-birdie 35 coming in, a 2-over 74 from Latanna Stone and a 3-over 75 from Svensson.

LSU finished improving every day with rounds of 291-289-286 for its 866 total that moved them up one spot to second. Auburn earned the No. 1 seed by firing three consecutive rounds of even par 288. LSU finished one shot ahead of South Carolina at 3-over 869 after an even par round.

The rest of the qualifiers for match play were: Ole Miss, Florida, Alabama, Vanderbilt and Tennessee. The Vols posted +23 to get the final spot in match play, five shots better than Texas A&M.