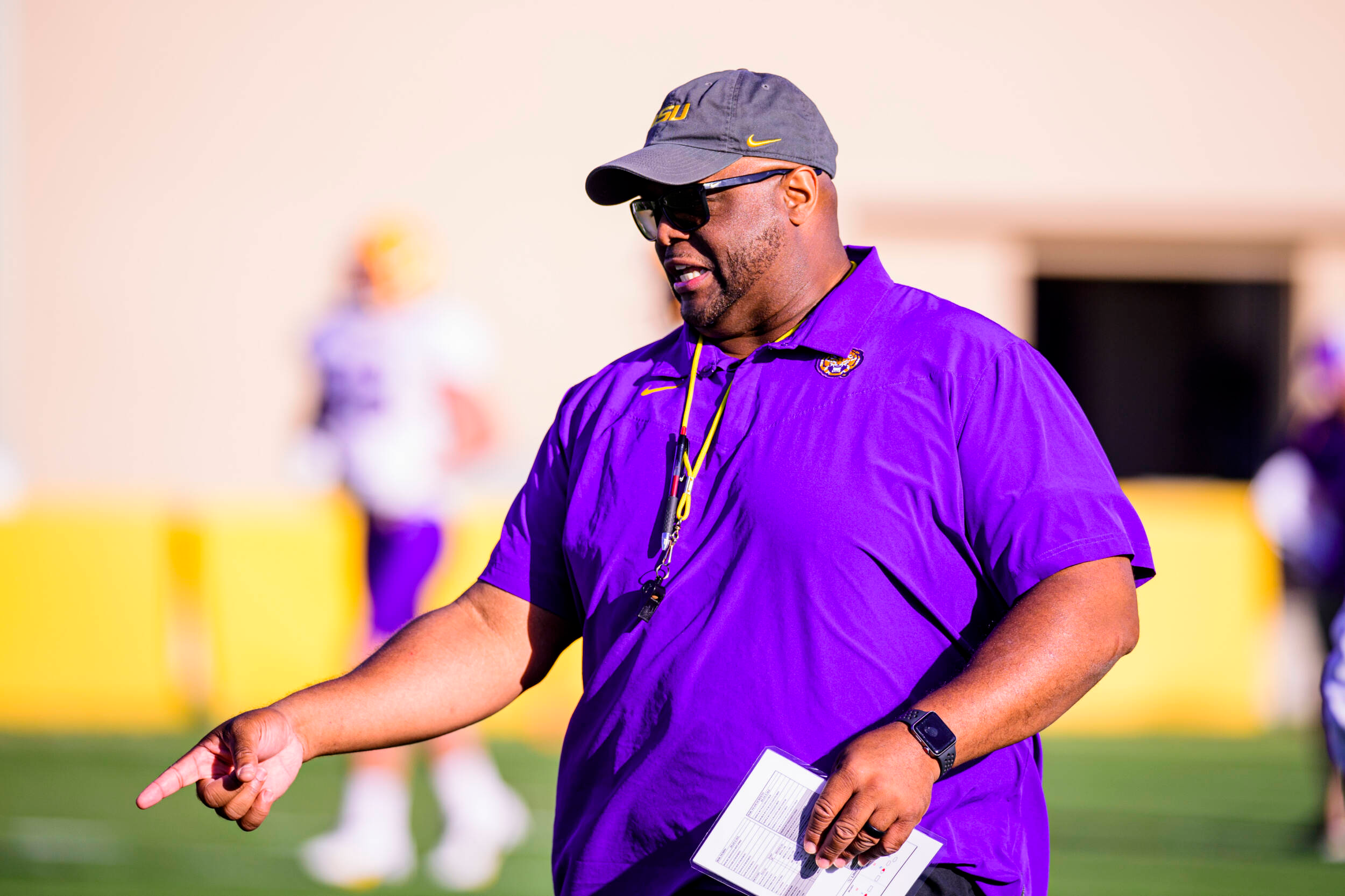 Offensive line coach Brad Davis sat down with LSU’s Emily Dixon in an exclusive Q&A session. Davis, the Baton Rouge native, spoke about the culture change under Coach Brian Kelly, his stint as interim head coach for the Texas Bowl, the future of the offensive line, and more.

Emily Dixon: Coach Davis, you’re the only coach I don’t have to welcome to LSU, and certainly don’t have to welcome you to this city. You’re from Baton Rouge, started your career at Southern Lab, served as the first black head coach in LSU football history, and now continue your career as the offensive line coach at LSU. What would Brad Davis from Belaire High School think about all of those accomplishments?

Brad Davis: I tell you what, he’d be awfully proud. It’s a really, really cool moment in my life right now. I’m just trying to enjoy every bit of it. But at the same time, I’m trying to leave no stone unturned. It’s a great opportunity. But with that comes huge expectations, so I think I’ve gotten over the feelings and the emotional piece of it all. Everyone has welcomed me and made me feel super happy to be home. But now I have a job to do. I think the bottom line is now it’s about results. My energy, my effort right now has been really poised towards getting results and getting my unit to perform at a higher level, and getting the best out of my kids. Recruiting players that are going to upgrade the talent in our room. Establishing winning habits with our guys that are going to help us compete for championships year in, year out.

BD: The players will do what you emphasize and what you focus on. What we chose to focus on was each other. And in doing so, I think we were able to drown out the noise. Eliminate the distractions and the things that were going to happen, let them happen. We wanted to focus on enjoying one another, the seniors, the group of guys that were in that locker room. We wanted to send those guys out, if possible, as a winner. But more importantly, we wanted to enjoy those last moments we had to compete together. That impacted me as well as a position coach because I want to make sure I’m always emphasizing those things for my players as well in my particular unit. In terms of myself, it gave me a light, so to speak. Everyone asks, in terms of career-wise, what your goals are and I can’t say that I really ever aspired to be a head football coach. I really take things as they’ve come to me. Having that opportunity opened my eyes to what the possibilities could be. More so now, in this role as an assistant under Coach Kelly, it’s made me more apt to learning more from him, and seeing this process through the transition, his message to the team, how he interacts, the program that he’s building on a daily basis. I take pages of notes of things that if I were in his position that I would do the same.

ED: Speaking of Coach Kelly, how would you describe the culture and team that he wants to build here at LSU?

BD: I think it’s thorough, if I had to use a word. You can tell the years of experience he’s had as a head football coach and really the success that he’s had. He has a plan. It really encompasses every aspect of our players’ lives. It’s not just football and X’s and O’s, it’s academics. It’s their personal lives, it’s their social lives, their spiritual lives — every part of our players that’s in this program is touched. Everything we do is with the mindset of enhancing them and making their experience better. It’s really neat to see our head football coach getting everyone in alignment from the top to the bottom, so doesn’t matter who you are in the program, everyone has a role. And everyone is made to feel that. The role they play is important to the success of the organization. So, I think it’s thorough. I think that it’s well-thought. I think that everyone that’s in this building sees value in the message that our players are receiving. Every day we wake up, we come here, go to work, and try to live up to the standard that Coach Kelly sets. I’m excited to be a part of it. I think that we have a really, really bright future ahead of us in terms of the product that our fans will see on the field. Our players are going to play really, really hard. They’re going to be disciplined. They’re going to be tough.

ED: Since you are one of the few people in the building that can see these changes in real-time, how have you seen these positive strides in the areas Coach Kelly really emphasizes: accountability, mental toughness, preparation … how have you seen that come to fruition?

BD: The immediate manifestation, I think, is in the classroom piece of it. It’s something that doesn’t get talked about a lot outside of the football building, but it’s a huge piece of it. Our kids come to school here and they want to play football and win championships. They want the opportunity to move on to the NFL, but the number one objective is for them to graduate. So, making our players have a personal investment, I should say, in their academic success, is one of the biggest ways I’ve seen it manifested. We don’t want our players to get lost in this quote, unquote, “football dream” where they think they’re here for three years and I’m going to go be a millionaire. I think that’s a misconception that’s rampant in college football. Coach Kelly has a holistic approach to our players and in helping them grow in their personal lives, being invested in their success, not just on the football field, but equally in the classroom. That’s probably been the biggest manifestation that I’ve observed. I think it’s been a great transition from that standpoint because it’s something that I really believe in.

BD: I think Coach Kelly did an unbelievable job of putting together a group of men that, number one, everyone’s pulling the rope in the right direction. Everyone sees the vision that Coach Kelly has for our program, and we’re pulling it in the right direction. I think that the most humbling piece is there’s not one person in that room, from the offensive coordinator to the graduate assistants that think they’re above LSU or thinks they’re above doing the work. There’s no one in there with an ego. No one thinks they have all the answers. No one thinks that they can’t be told that they’re wrong. This spring we are building an identity. I think that’s a big piece of who we are, a big piece of what Coach Denbrock brought in. Everyone talks about The Griddy, which is synonymous with LSU. It’s a dance. But really, we’ve broken it down with the word grit. And really what that means, defining it to our players, is not just a dance or part of a culture per se. Having grit and toughness, having an identity, and being steadfast in your beliefs. Those are things that we want from our players on a day-to-day basis. I think that our players have really taken hold to that. Everyday we go out to spring and practice, I feel like our guys have gotten better.

He's got a mic on and really doesn't care.

ED: You have some new, raw talent on the offensive line to work with, plus some guys you’re familiar with from last year. What do you want to accomplish with your group throughout these 15 practices in spring ball?

BD: The biggest thing is, going into spring, I told my guys the depth chart is really just an organizational tool right now. I’m teaching them winning habits. The biggest goal for me coming out of this offseason was to create competitive depth, where there will never be a sense of entitlement. There’s not one person in our room who can walk in there and assume that they can rest on their laurels and say, “Hey, I’m going to be the starting whatever at LSU every day.” They come out to practice, they have to earn it, I’m not done with that process. We’re going to continue to bring in talented players throughout the summer that I think will continue to add life to our room. I think it’s elevating the level of performance in our room. I’m trying to take these guys from — they’ve seen success and I think the easy thing for kids to do is assume that because they’ve seen it done one way they can just go out and do it again. The same and every team is different every year is different. The cycle of college football, it’s ever-evolving, so we’re starting from scratch, we’re working on fundamentals, we’re working on great practice habits, we’re working on instilling toughness and what that means what it looks like. Not just going out and talking about being tough, but actually putting things on film, that you don’t have to talk about it. People say it about you, so we’re forming an identity. We’re working on being detailed, and not just working on the broad strokes, but the intricate details that can separate us from other people. When it gets to those close games, we’ll know how to perform that. Those are the big pieces right now.

ED: If I went back and asked some of your former players — which I actually did with the guys going into the draft — how would they describe you as a coach?

BD: It depends on what day. It depends on what setting. It depends on how practice was. You know what I mean? I like to have a lot of fun. I like to laugh and enjoy myself. I think that’s what drives me every day, waking up and being grateful for the opportunity I have when it comes to football. I think I’m able to flip a switch to very intense, focused, and demanding. I certainly don’t accept excuses. I want to challenge my players. I never allow them to be comfortable. There’s not a time where they can walk in and assume that what they’ve done is enough. We’re going to always raise the bar and push them to be better in some aspects of their life, not just football, but academically, etc. I’d like to think that I’m fun. We have a good time. But I would certainly think they would speak to my intensity. Being probably very demanding.