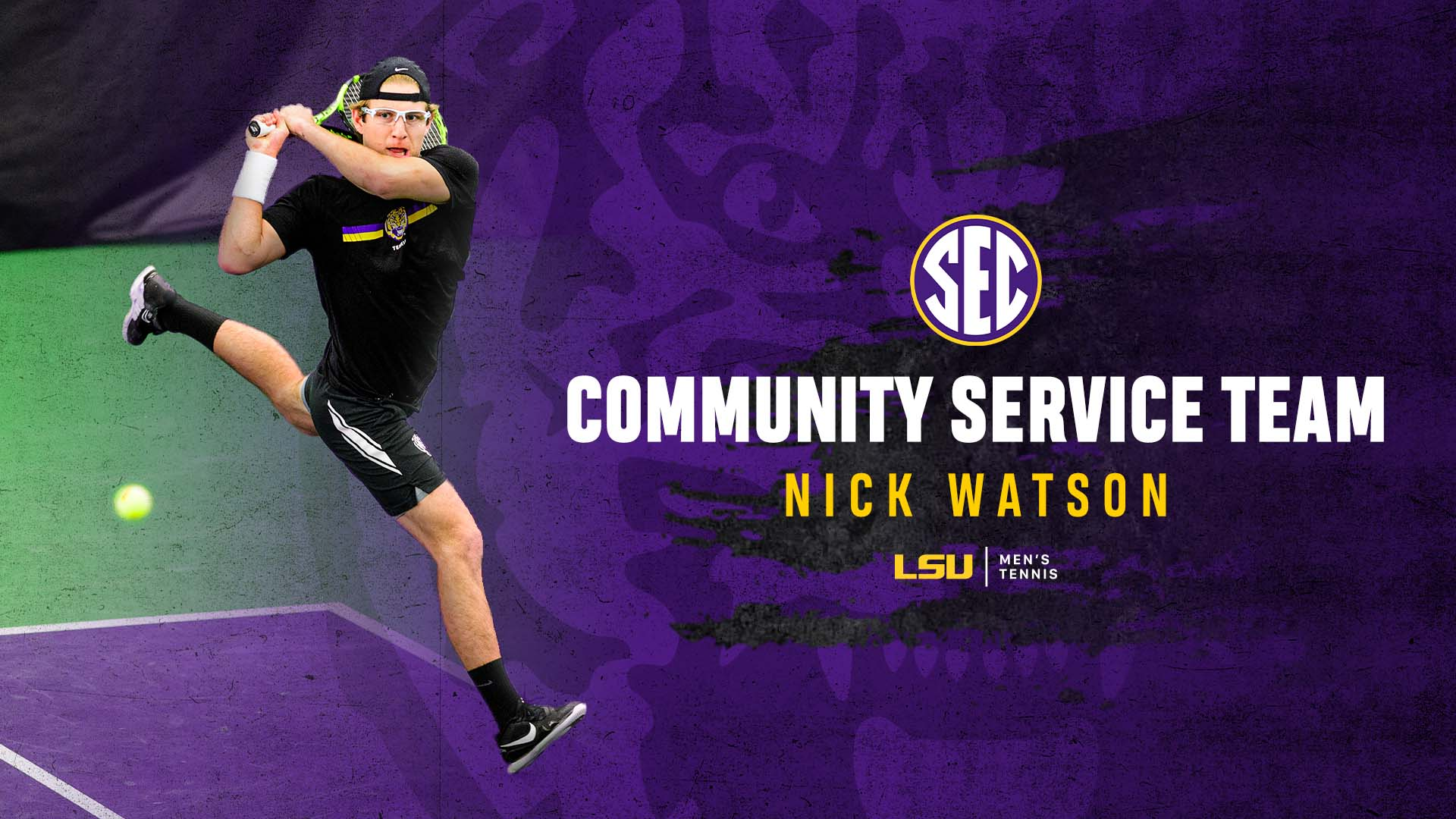 The SEC Community Service Team is meant to highlight student-athletes whose accomplishments exceed the results on the courts or grades in the classrooms. The SEC sponsors Community Service Teams in all 21 of its varsity sports to recognize those who use their free time to improve the lives of others.

Nick Watson, the LSU representative for the 2021 SEC Community Service Award, continues to give back to his hometown of Baton Rouge.

Watson is a frequent member of the St. Vincent De Paul organization, which is an international, non-profit, charitable organization that has a rich history of service to the community. During the holidays, Watson put together hundreds of meals and helped distribute them to those needing assistance.

Watson also regularly volunteers at Miracle League Baseball Games at Cypress Mounds. The Miracle League provides a space for those suffering from any physical or mental disability to enjoy sports. They use a “buddy” system – pairing each player with an able-bodied peer, as Watson helps those enjoy the sports he loves outside of tennis.

All league-sponsored sports have had a Community Service Team since 2004, with at-large teams for men’s and women’s sports being chosen from 1999-2003.

Patrick Kaukovalta has served as a leader for the Crimson Tide both on and off the court. Since arriving at Alabama in 2018, Kaukovalta has worked with Habitat for Humanity, Halloween Extravaganza and Project Angel Tree. During the pandemic, he was part of a Student-Athlete Advisory Board initiative that sent letters of appreciation to Alabama staff. He is also former SAAC representative, serving with the organization for two years.

Joshua Bortnick has been and is involved in numerous community service projects. Bortnick spent four years on the Student-Athlete Advisory Committee and is still a member of the National Society of Leadership and Success. He has also volunteered for countless events and organizations including the Dale Eshelbrenner Memorial Tennis Tournament, the Fibrosis Tennis Tournament, the Stephanie Waterman Foundation, Christmas for Kids, and Children’s Hospital visits. He was also a two-time participant in the Team Luke Hope for Minds event. Bortnick is a three-time member of the SEC Community Service Team.

Jackson Ross represents his men’s tennis teammates on Auburn’s Student-Athlete Advisory Committee, and he was a project leader in December for that group in its Angel Tree project, shopping for gifts for underprivileged children. SAAC also coordinates the downtown Trunk or Treat, Beat Bama food drive and student-athlete enrichment events on campus. He has been involved with outreach to local elementary schools and Kids Days at tennis. Ross also participated in a food drive in his hometown of San Antonio, and while playing in tournaments throughout South and Central America, he takes clothes to donate to kids playing at the local tennis clubs.

Will Grant leads the Florida Gators men’s tennis team with 14 hours of community service this year. He has helped tremendously throughout the community with various organizations and events, such as: Bread of the Mighty Food Bank, MLK Day of Service, Gators Tracks and Friends of Jaclyn. With the Bread of the Mighty Food bank, Grant helped create and sort food boxes to be distributed to the elderly. During the MLK Day of Service, Grant joined other volunteers in cleaning the environment by picking up trash and litter at the local Lake Forest Elementary School. With Gator Tracks, Grant visited multiple elementary schools in the Gainesville area where he gifted shoes to children in need. Ranging from Nike to Adidas brands, these shoes were delivered to children who might not be able to receive Christmas gifts this year. In addition, Grant and the rest of the men’s tennis team joined forces with the Friends of Jaclyn Foundation to give two-year-old Kolby Zaron a memory he will never forget. Grant and the team formed a close relationship with Kolby through Zoom and in-person meetings before officially offering Kolby to be a part of the team. Kolby was able to sign his NLI to become an official member of the Gators men’s tennis team and was recognized on the court before the match against Ole Miss on March 18.

Tristan McCormick played an important role in the Georgia Tennis ‘Serving for a Cause’ initiative that raised support for the Boys and Girls Club of Athens. This year, both the men’s and women’s tennis teams at UGA announced a student-athlete led project that asked for support from fans to raise funds for children to be able to attend the Boys and Girls Club of Athens summer camp. This allows for parents to send their children to summer camp while the school-year program is not in session. McCormick was selected to serve as the men’s tennis representative for this great cause.

Tate Sandman is an exemplary student-athlete that has contributed to the Lexington area in a number of ways. Tate volunteers his time with Acing Autism, a program designed to help children with autism grow by having others teach them how to play tennis. He has been involved with the program since 2021. Further, Tate is also involved with Kentucky Children’s Hospitals. He coordinated an effort to have the Kentucky men’s tennis team write letters for children who are forced to stay in the hospitals with a sickness and has volunteered with them through 2021 until this year. The junior also works with God’s Pantry in his free time since last year as well. He helps to pack food for homeless shelters to provide to those in need in our local community.

Nick Watson, the LSU representative for the 2021 SEC Community Service Award, continues to give back to his hometown of Baton Rouge. Watson is a frequent member of the St. Vincent De Paul organization, which is an international, non-profit, charitable organization that has a rich history of service to the community. During the holidays, Watson put together hundreds of meals and helped distribute them to those needing assistance. Watson also regularly volunteers at Miracle League Baseball Games at Cypress Mounds. The Miracle League provides a space for those suffering from any physical or mental disability to enjoy sports. They use a “buddy” system – pairing each player with an able-bodied peer, as Watson helps those enjoy the sports he loves outside of tennis.

Simon Junk has made a tremendous impact to the Oxford, Mississippi community and is an exemplary role-model on and off the court. The No. 5 Singles and No. 2 singles player for the Rebels tennis team has contributed to the community through both the Ole Miss Athletics program and local organizations. Through the athletics department Junk has engaged in the Adopt-A-Basket program every year. Through this program Ole Miss donates Thanksgiving baskets every year to families in need throughout the Lafayette-Oxford-University Community (LOU). For Halloween he participated in the annual Trunk or Treat event for families in the LOU community. Junk has made an extraordinary effort to positively impact the education system in the community. He has volunteered at the Oxford Elementary Car Drop, welcoming students to school by opening doors and waving to them to start their day. By participating in the Feed the Sip program, he helped collect non-perishable food items to donate to elementary schools in Tunica and Quitman County. By taking part in the College Football Playoff Extra Yard for Teachers, Junk celebrated teachers in the LOU community. He also collected books and bears to donate in the annual Books and Bears collection. Junk engaged in a Hope to Dream in which he helped surprise 50 children in the Mississippi area with an entire bed set provided by Ashley Homestore. He also took part in the Night to Shine by celebrating guests with special needs during an unforgettable prom night. By leading through example, Junk has volunteered at the Oxford Health & Rehab center and encouraged residents to stay physically active by participating in the Sit & Be Fit class. He also helped to lead various exercises.

Alberto Colas is an incredible ambassador of Mississippi State in Starkville and the surrounding communities. Most of Colas’ volunteer work has been centered with MSU’s partnership with Henderson Ward Stewart Elementary School. Colas is part of the pen pal program and has exchanged encouraging letters with students in October, December and March. He also participated in The Partnership Drop Off where he and other student-athletes welcomed students to school in the morning. Colas also took part in “Hit and Giggle’, a series of open court nights where student-athletes play alongside Bulldog tennis boosters to help grow the sport in the greater Oktibbeha County Community. He also helped with Tiro De Pichon Clean Up back in his home country of Spain.

Carter Morgan leads the team in community service hours and is a member of South Carolina’s Student Athlete Advisory Committee where he serves on the Community Service Committee. Through this position, he coordinates community service opportunities for all student-athletes at the university. Recently, he has coordinated Meals on Wheels opportunities that he encouraged others to sign up for. Through Meals on Wheels, Morgan leads his fellow student-athletes in packing and delivering meals to homebound seniors in the Columbia community. Along with his work at Meals on Wheels, Morgan has also assisted St. Lawrence Place, a local housing community that offers support services and life skills training for families experiencing homelessness. He assisted the organization in moving supplies into their new facility

In the fall of 2021, the University of Tennessee Athletics Department selected Johannus Monday as part of its VOLeaders Academy Class of 2021-22. A sophomore on Tennessee’s men’s tennis team majoring in Political Science, Monday joined the largest ever VOLeaders cohort, which is comprised of 45 student-athletes that represent each of Tennessee’s 20 varsity sports. The year-long leadership curriculum begins annually starting with the Fall semester and concludes with an international cultural exchange trip in the summer. As part of his weekly VOLeaders experience, Monday, a native of Hull, England, teaches the ins and outs of tennis to attendees at a kids’ tennis clinic each week. In the fall of 2021, Monday also donated his time by serving at a local Knoxville school, where he helped run P.E. classes during the week. The VOLeaders group often participates in team-building activities, such as when Monday and the group participated in a blind-folded kickball game earlier this spring.

Kenner Taylor is a two-time Huddle Leader and is currently serving as the Assistant Director for External Operations for Texas A&M Traditions Night. Traditions Night is a student-athlete led initiative that welcomes 150 or more student-athletes to Texas A&M’s vast campus. The night introduces incoming student-athletes to different buildings and monuments on campus along with many Aggie Traditions. Additionally, Kenner has served as a campus peer mentor for Hulabaloo U, a program for first-year students on campus that equips them to achieve academic and personal goals.

Kenner volunteered to assist the Brazos Valley Food Bank in serving the Bryan-College Station area. Kenner was responsible for can collection and delivery at Spring Creek Elementary

Connor Robb-Wilcox has been a team captain with Miracle Network Dance Marathon, a student-led movement on campus supporting Children’s Miracle Network Hospitals that raises funds all year long for children at Monroe Carell Jr. Children’s Hospital at Vanderbilt by hosting various events and fundraisers around campus. As the leader for the men’s tennis team for the event, his responsibilities included: raising funds and financial support through donations and working with Dance Marathon leaders to plan and execute team meet and greets with their assigned miracle child.