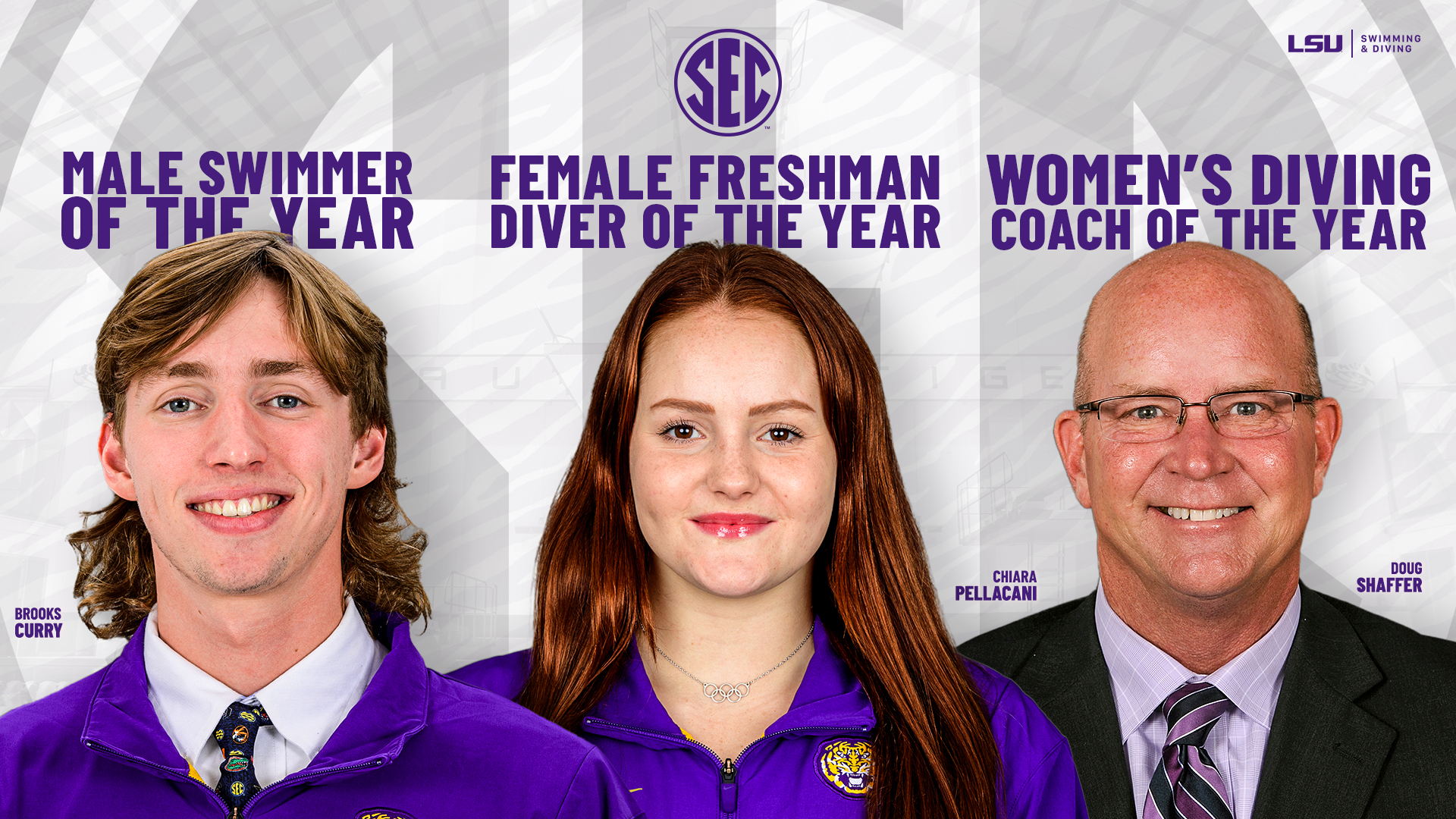 BATON ROUGE, La. – Three members of the LSU swimming and diving team have received superlative awards for their respective performances during the 2021-22 season, the league office announced Wednesday.

Brooks Curry, who earned the first individual swimming national title since Mark Andrews in 1988 was named the Male Swimmer of the Year. After Curry broke onto the scene at the 2020 SEC Championships, he has not slowed down since. With an Olympic gold medal, another SEC title, and two national titles, Curry has cemented his name as one of the best.

During the 2021-22 season, Curry opened the season breaking an LSU Natatorium pool record in the 50-free. He would go on to break his own pool record in the regular-season finale against Texas A&M, improving his 19.51 to a 19.42.

In the postseason, Curry began his 2022 SEC Championship journey by breaking the school record in the 200-yard medley relay. On the second and third day of the SEC meet, he claimed two silver medals in the 50-free and 200-free, which at the time set school records. His 50-free time would eventually improve to the third-fastest time in the nation after clocking an 18.56 in the 2022 NCAA Championships.

In the 100-free at SEC’s, Curry touched the wall first with a blistering time of 40.99, which broke U.S. Olympian Caeleb Dressel’s previous record at the SEC Championships. He would also eclipse his own school record with a first-place finishing 40.84 at the national meet. His time in the 100-free sits as the second-fastest time in the country.

Pellacani, who only joined the swimming and diving program in the Spring semester immediately showed off her value to the team. She was named the Female Freshman Diver of the Year for her efforts.

At her first meet in the purple and gold, she swept the springboard events in the regular-season finale versus the Aggies. Following her fast start, she participated in the SEC Championships at the Jones Aquatic Center on the University of Tennesse’s campus. While there, she jumped into LSU’s all-time top-10 list on one meter and set three personal records on each event.

At the NCAA Zone D diving regional, Pellacani was one of six divers to qualify for the national meet in Atlanta. She qualified on both springboard events after claiming two fourth-place finishes on one-meter (613.15) and three-meter (704.60).

Shaffer, who has led the LSU diving program for the last 20 seasons, collected his third SEC award following an impressive finish from the female divers. After sending four female divers to the NCAA Championships, Shaffer was named the Female Diving Coach of the Year by the SEC.

In his 20th season, he has pursued making LSU diving one of the most consistent programs in the country. Previously, he received the same recognition in 2008 after leading former Tiger Rachel Ware to her third All-American accolade in two years with a 12th-place finish in the one-meter springboard at the NCAA Championships.

His athletes also had a superb showing at SEC’s as a conference-high four LSU divers received medals for placing in the top three of their respective events.

During the 2021-22 season, LSU divers saw success with personal records and additions to LSU’s all-time top-10 list. At the SEC Championships, Pellacani was the highest diving point scorer for freshmen and Adrian Abadia was the highest place finishing diver at the 2022 NCAA Championships.