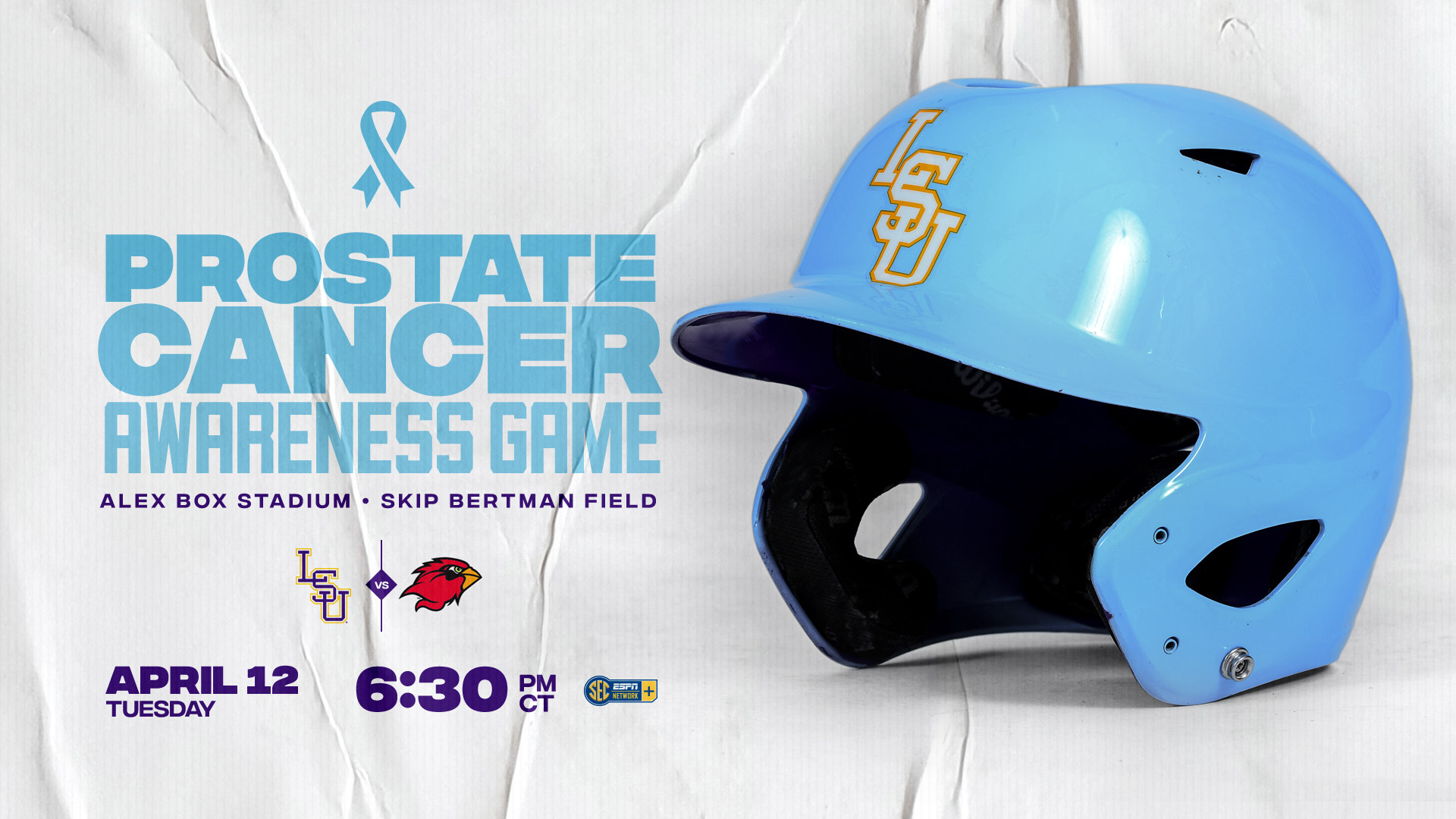 TVONLINE
• The game may be viewed live on SEC Network +

SPECIAL EVENT
Tuesday’s contest is LSU’s annual Prostate Cancer Awareness Game, which will promote awareness of the early detection and treatment of prostate cancer in men.

LSU SERIES RECORD VS. LAMAR
LSU leads the all-time series with Lamar, 8-6, including a 5-3 win on April 23, 2019, at Baton Rouge in the teams’ most recent meeting … LSU and Lamar met on the diamond in eight straight seasons (2012-19), and the Tigers won seven of those contests … the Cardinals’ only win over LSU in the previous eight meetings came in 2016 in Beaumont, Texas, when Lamar posted a 12-11 victory.

QUOTING COACH JAY JOHNSON
“Our team has been competitive in every game this season, and I would stand behind them in terms of their confidence. Playing complimentary baseball is so important to the success of our team. There are still so many games left on the schedule – it’s about throwing strikes, about playing catch, about quality at-bats. Hopefully, by playing well we produce positive results and positive feelings are generated. I’m very proud of the team for the way it performed at Mississippi State; we prepared well, and it led to success over the weekend.”

ABOUT THE TIGERS
• LSU recorded a midweek win over Grambling last Tuesday and posted a three-game SEC sweep at Mississippi State over the weekend … the sweep was LSU’s first in the SEC since March 2019 versus Kentucky and the Tigers’ first league sweep on the road since May 2017 at Mississippi State … the sweep also marked LSU’s ninth straight series win in Starkville; the Tigers last lost a series in Starkville in 2003.
• The Tigers play host to Lamar this Tuesday before beginning Week 5 of SEC play at 6:30 p.m. CT Thursday versus Arkansas in Fayetteville, Ark. … LSU, which is 7-5 in the SEC, is in a three-way tie for second place in the Western Division, one game behind first-place Arkansas (8-4).
• True freshman rightfielder Josh Pearson was named SEC Co-Freshman of the Week as he led LSU to a series sweep at Mississippi State over the weekend, batting .455 (5-for-11) in three games with two homers, six RBI and two runs scored … Pearson hit two homers and collected five RBI in Sunday’s 13-3 victory, which gave LSU its first SEC road sweep since May 2017, also at Mississippi State … his three-run homer in the fifth inning highlighted a five-run outburst that broke a 1-1 tie and propelled LSU to the victory.
• LSU’s batters have been hit by a pitch 74 times at the halfway mark through 32 games of the regular season … the Tigers lead the nation in batters hit-by-pitches, and the next-closest SEC team in that category is Missouri with 46 HBPs … LSU is near the top of the SEC in several offensive categories, including batting average (No. 2 – .303); slugging percentage (No. 2 – .536); on-base percentage (No. 2 – .421); runs scored (No. 2 – 286); base hits (No. 2 – 335); RBI (No. 2 – 267); doubles (No. 2 – 72); home runs (No. 4 – 57) and total bases (No. 2 – 592).
• Right-hander Paul Gervase posted a save in each of the first two games of LSU’s sweep at Mississippi State, helping the Tigers clinch their ninth straight series win in Starkville … Gervase worked a perfect 2.2 innings in two appearances over the weekend with two saves and six strikeouts … he worked the final inning of LSU’s 5-2 win on Friday night and retired the side in order while recording two strikeouts … Gervase pitched the final 1.2 innings of Saturday’s game, preserving a 4-3 LSU victory.
• The LSU pitching staff is No. 3 in the SEC in ERA (3.43); No. 3 in opponent batting average (.221); No. 5 in batters struck out (337); and No. 3 in fewest earned runs allowed (109).

ABOUT THE CARDINALS
• Lamar is coached by former LSU player and assistant coach Will Davis, who was a catcher at LSU from 2004-07, and he worked as an assistant under former LSU head coach Paul Mainieri from 2008-15 … Davis is in his sixth season at the helm of the Lamar program.
• Lamar is hitting .283 as a team with 22 home runs and 22 stolen bases in 30 attempts … the Lamar pitching staff has a 4.85 cumulative ERA
• Lamar is led at the plate by catcher/first baseman Josh Blankenship, who is batting .349 on the year with eight doubles, one triple, one homer and a team-best 29 RBI … infielder Chase Kemp has nine doubles, 24 RBI and a team-best four homers, while catcher Ryan Snell has contributed five doubles, three homers and 24 RBI.