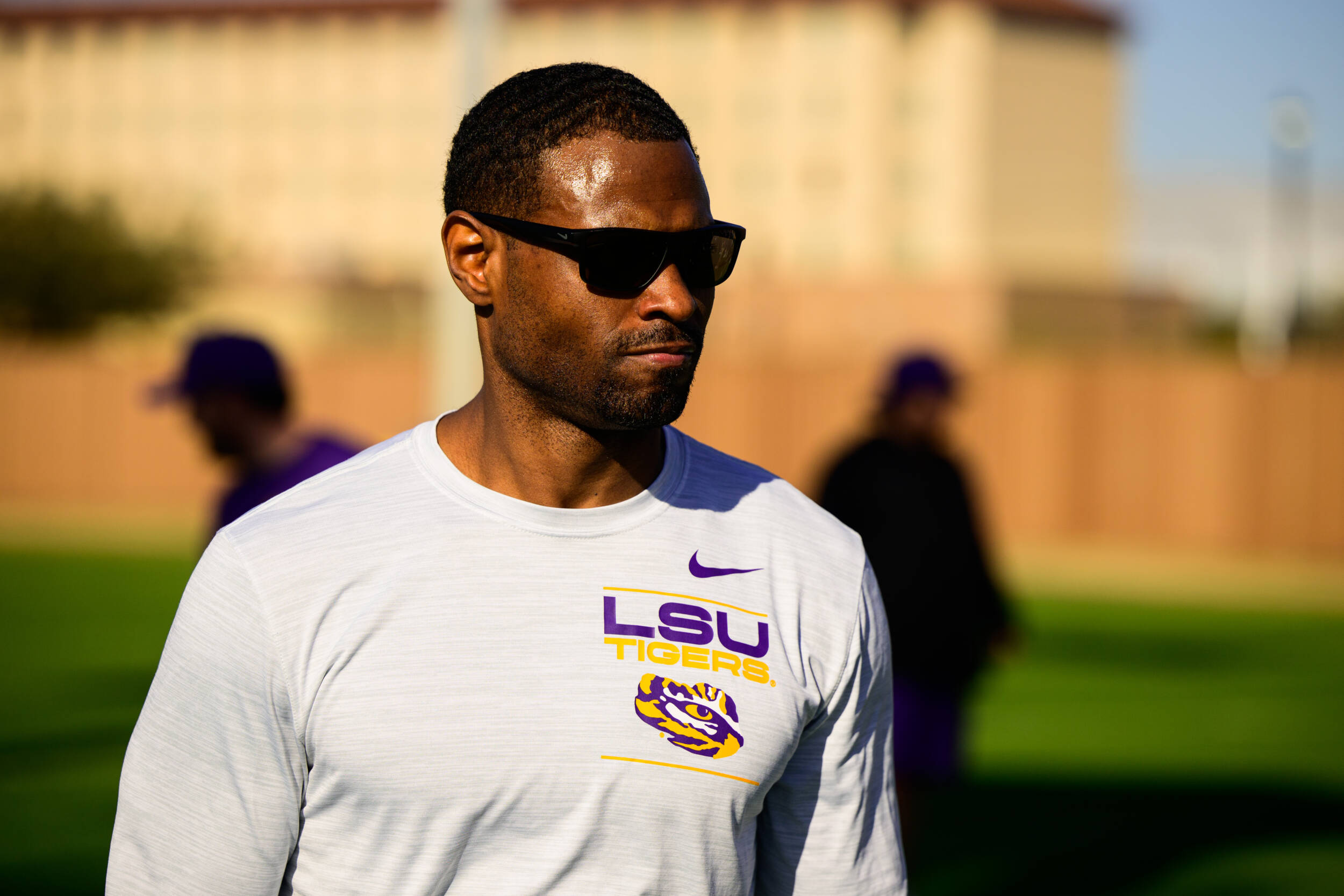 New wide receivers coach Cortez Hankton sat down with LSU’s Emily Dixon in an exclusive Q&A session. Hankton, the New Orleans native, talked about his return to the state of Louisiana, working alongside Coach Brian Kelly, the rich history of receivers at LSU, and more.

Emily Dixon: Welcome home to Louisiana, now your new home here at LSU. What does it feel like for you to be in your home state coaching at the flagship university and recruiting for the Tigers?

Cortez Hankton: It feels like home. Growing up as a young man in New Orleans and watching football every weekend, the main event has always been the LSU Tigers. To be here now, working, mentoring these young men has definitely been a dream come true.

ED: For you, why LSU right now?

CH: The tradition, first and foremost. An opportunity to work under Coach Kelly, who has done a great job developing good programs, developing a good staff and developing young men. And, just to have the opportunity to come to Wide Receiver U. When you look at the history of the guys that played the position here at this school, it’s been amazing. From OBJ, Jarvis Landry, you’re talking about the young bucks that’s in the league now doing their thing between Justin Jefferson and Ja’Maar Chase. You really try to keep that thing rolling. You want the young men that we’re recruiting to see themselves being those guys playing on Sundays.

ED: A lot of New Orleans guys that you just referenced.

CH: I didn’t want to put that out there. But, you noticed it.

ED: How would you describe the culture and team that Brian Kelly wants to build here and LSU?

CH: Positive. Family, first and foremost. Making sure that the task at hand is all about striving for greatness. One thing that he always says is graduate champions and that is to graduate with a college degree, and also to win a national championship.

ED: When working with the wide receivers this spring, and it’s a position group that Coach Kelly said he’s pleased with, talent and depth wise going into the spring, what are some of the things you’re focusing on most throughout spring ball with your group,

CH: Whatever rep to get better, and to show visible strain and making sure that we’re never satisfied with our performance. There’s always an opportunity, whatever day to improve intentionally. The good thing about this group is that they’re eager to learn and eager to compete. It’s really fun coaching.

ED: You’re a new face to the program, a lot of new faces on the team as well. What’s your approach when it comes to building those relationships with a completely new group of guys?

CH: Well, you always make it bigger than football. Knowing something about them personally outside of the game of football, knowing a little something about their families, and understanding what their “why” is, their motivation for playing the game. Those are the things that you want to do to make sure you continue to cultivate the relationship so they’re really receptive to what you’re teaching.

ED: If we went back and asked some of your former players how they would describe you as a coach, what do you think they’d say?

CH: Demanding. I think sometimes I can pop off and talk crazy like I can still play the game and I always feel like that. I may need to stretch a little bit longer, but I always feel like I get after it. But also that I love them, and that I have the best intentions and I want to make sure that they reach their full potential.

ED: Demanding is working because you were recently part of the national championship team and that’s something that Coach Kelly is very vocal about — building a championship program here at LSU. What’s it been like getting to know the other offensive coaches on staff as you build that foundation together.

CH: It’s been awesome. I have a lot of respect for Mike Denbrock and what he’s done. When he stepped into that seat, the first thing he said was, “Look, the thing that we need to do first is get to know each other and get to know these players,” and it had nothing to do with football. That really shows what this place is about, just in terms of a family atmosphere and making sure that we’re all on the same page. The chemistry is right. That’s been one of the most impressive things, just how fast the guys came close together.

ED: You pour a lot of yourself into getting back in various communities, whether it’s through scholarship funds, Read Across America and other foundations. How do you want to incorporate those aspects into your coaching here at LSU?

CH: We’re obligated to give back to the community. I’ve been blessed, we’ve all been blessed. I have opportunity to coach at the best university in the land, the best football program. It’s my responsibility to make sure we pour back into the community that supports us so much.

ED: How important is this program to the state of Louisiana, especially from somebody like you that it’s grown up, seeing it develop?

CH: The mood, the vibe, the culture — everything moves when LSU has success. The whole vibe of the state is different. I was on the other side of it a couple of years ago. We had the opportunity to play that great team in 2019 in the SEC championship. It was a little different vibe when when those guys were in the Dome. We’re trying to bring it back to that, knowing that is going to take some hard work, dedication, some discipline, but we’re going to do it one day at a time.

ED: Off the field, you wife have two sons, how do you balance football and family life because that’s a tough balance.

CH: Keeping the main thing the main thing. When I’m in this building, I want to make sure that their sacrifices count. I’m gonna give it my all and make sure that I do the things that’s necessary to strive for the greatness that we’re trying to achieve. Now, when I’m at home, I’ve got to be the best husband and the best father that I can be. And the beauty of it is that they love football, too. My wife, Shon, she’s a football wife. My Dad played football, so that helps. And my sons, they just love being around a game and they look at some of the players like big brothers, so when it comes to balance it’s good when those two can intermingle with each other.

ED: And lastly, what does Cortez Hankton do when he’s not coaching football?

CH: I feel like my mind is always racing. I just got back into reading. I like playing with my kids. I feel like investing time with our boys is so important. For me, my hobby is trying to keep up with those guys. Like Trip, he’s a basketball player. He’s a six-year-old. Cruz, he’s a three-year-old. If you want to see some energy on a whole new level, it’s like this little dude drinks expressos all day. He’s just like the Energizer bunny. He’s just going and going, but, it’s fun. I’m blessed. And I’m not only blessed to be able to be in this position in terms of using football as a platform to develop young men. But I’m blessed to have a family that I love and support me so much. Through this, it can be a demanding profession, but at the same token, it’s my passion and I love to do what I do.