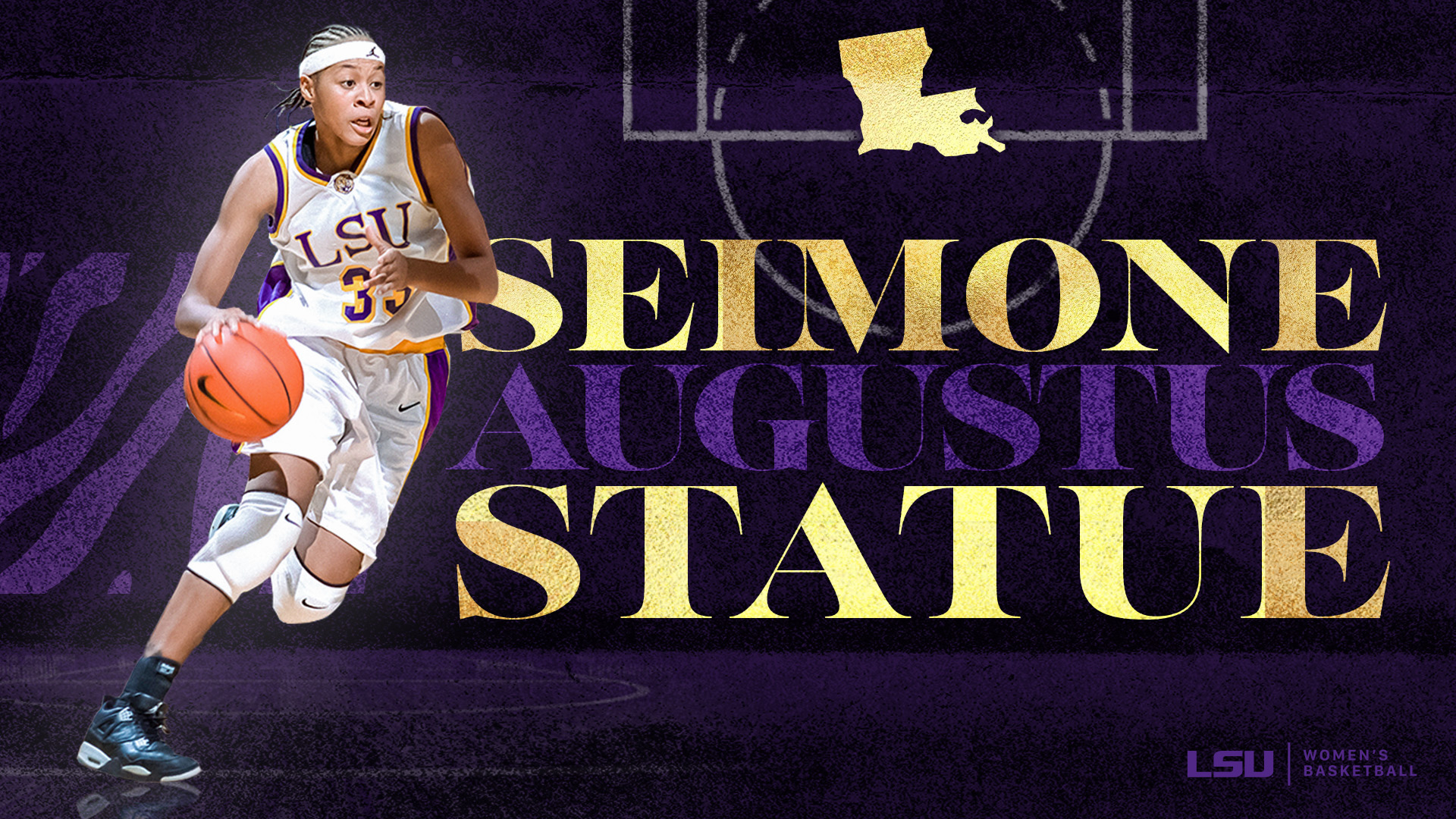 BATON ROUGE – Seimone Augustus, a generational player who made a transformational impact on LSU Women’s Basketball, will become the first female student-athlete in school history with her own statue, the university announced Monday afternoon.

“Words can’t express the gratitude I feel in my heart,” Augustus said. “To leave a timeless legacy of inspiration for generations to follow is a lifelong goal, and with this announcement, I am humbly honored. Representing Louisiana has always been and always will be a driving force in my continued pursuit to greatness.”

Augustus, LSU’s most decorated female student-athlete, will join three other Tiger greats – Bob Pettit, Shaquille O’Neil and Pete Maravich – with statues outside the Maravich Assembly Center. Already cast, the Maravich statue will be unveiled in the coming months.

“A Seimone Augustus statue is befitting for a student-athlete whose talents, accomplishments, and impact will forever stand the test of time,” LSU Director of Athletics Scott Woodward said. “Seimone came to LSU as one of the most heralded recruits in school history, and she left a legacy on our campus, our state, and the sport of basketball that will never fade.

“Seimone was a singular talent who inspired basketball players across the world and helped transform LSU women’s basketball team into a national powerhouse. She will long be remembered as LSU’s greatest female student-athlete, and we are honored to recognize Seimone as one of the most iconic athletes to ever wear purple and gold.”

No other LSU women’s basketball player impacted her team and sport more than Augustus. The Baton Rouge native and 2005 graduate of LSU helped lead the Tigers to three consecutive Final Four appearances and was named both National Player of the Year and SEC Player of the Year twice. She’s also a two-time recipient of the Wooden Award and the Honda Award – the two most prestigious honors in women’s college basketball.

“Seimone Augustus is one of the greatest players in the history of our game. She has been successful at every level of basketball and what she did for this program and this university deserves to be recognized. I am proud we are able to honor Seimone with a statue where our fans will forever be able to reflect on her impact and greatness,” LSU Head Women’s Basketball Coach Kim Mulkey said.

She earned three first team All-America honors and earned the 2006 NCAA Class Award, which is given to the nation’s premier senior student-athlete based on achievement in four areas: community, classroom, character and competition.

Augustus’ No. 33 jersey has hung from the rafters of the Pete Maravich Assembly Center since Jan. 26, 2010, when she became the first LSU female student-athlete to have her jersey retired.

Augustus is one of only five Tigers to top the 2,000-point mark, and she ended her career with 2,702 points, the second-highest total in program history.

In 140 games, Augustus and the Tigers went 121-19 and finished each season ranked among the top five teams in the nation. LSU lost back-to-back games only one time during her career, and the 121 victories stand as the most-ever for the program over a four-year span.

The Augustus effect helped LSU’s popularity in women’s basketball reach an all-time high as the Tigers averaged 5,227 fans for the 59 home games during her four-year career. Augustus and her teammates played before five of the six largest crowds to ever fill the Maravich Assembly Center, which included 15,233 against Tennessee in 2005 and 15,217 against the Lady Vols in 2003.

Augustus was selected as the No. 1 overall pick in the 2006 WNBA Draft by the Minnesota Lynx. In her 15-year WNBA career, Augustus won four championships and was named MVP of the 2011 WNBA Finals. The 2006 WNBA Rookie of the Year, Augustus earned All-WNBA first team honors in 2012 and was a second team selection five times. She was an eight-time All-Star.

In 391 regular-season WNBA games, Augustus scored over 6,000 points and ranks among the league’s Top 10 all-time scorers.

To help celebrate Augustus you can contribute to the LSU Greats Statue Fund through the Tiger Athletic Foundation. To support the construction of the statue honoring her legacy, click HERE to donate today!