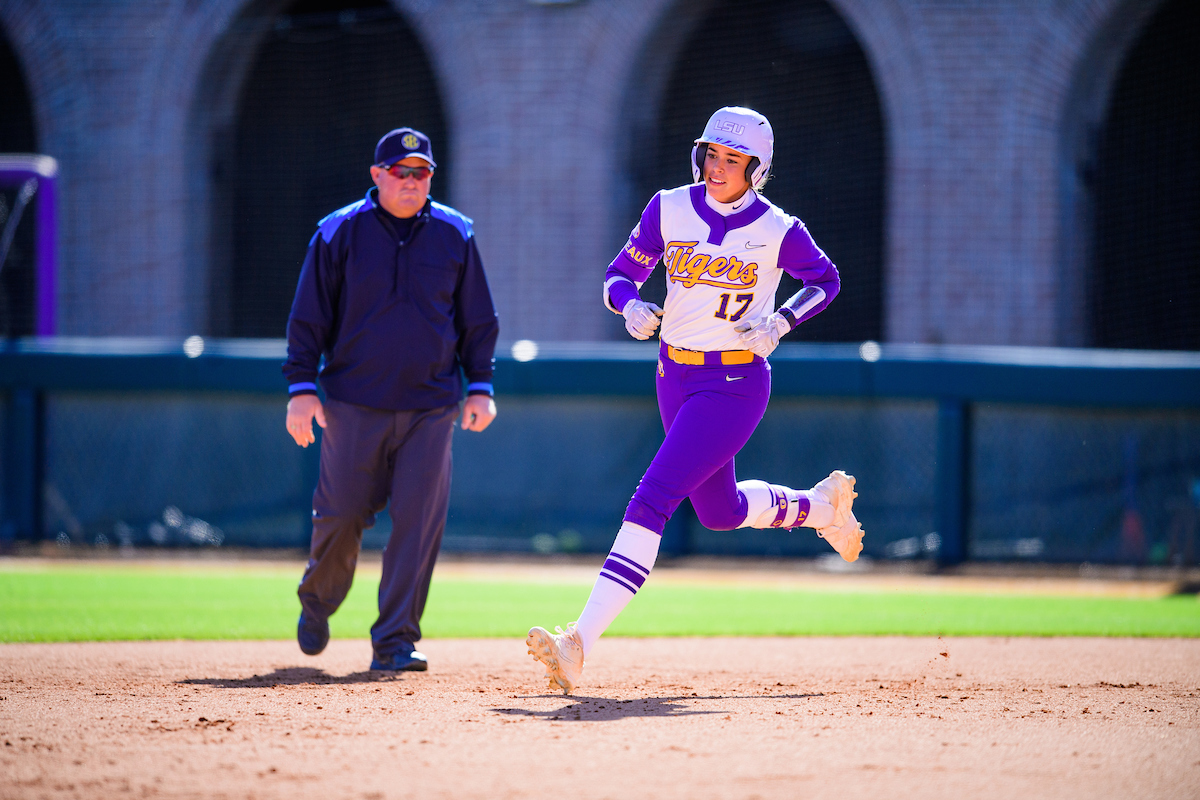 In addition to a few highlight reel defensive plays, Pleasants matched a career-high three hits, six RBIs, and became the sixth LSU Tiger to log three doubles in a game. Sophomore Ali Newland went 2-for-3 at the plate for her seventh multiple-hit game this season, and senior Shelbi Sunseri had one hit and two RBIs.

Junior Ali Kilponen improved to 13-4 in the circle after recording six punchouts and allowed six walks, three runs, and two hits in 5.0 innings of work. Sunseri got the start and finished with two strikeouts and walked two batters after allowing seven hits and five runs in 2.0 innings.

LSU scored its 11 runs in the first three innings before holding off Texas A&M who scored six unanswered runs to shrink an eight-run lead to three runs late. The Tigers sealed the game with a Kilponen strikeout and a groundout as they improved to 9-1 this season when scoring 10 or more runs.

The Tigers jumped on the Aggies early with three runs in the first inning. After sophomore Danieca Coffey walked and sophomore Ciara Briggs’ bunt single, Pleasants roped a pitch to left field for an RBI double. Junior Georgia Clark and Sunseri followed with back-to-back RBI sac flies, giving LSU a 3-0 lead after the opening inning.

Texas A&M made a pitching change to start the second inning, but LSU proceeded to score five runs on five hits in the frame. A pair of singles and a walk loaded the bases with no outs and junior Morgan Cummins, who led off the inning with a single, scored on a wild pitch. Pleasants cleared the bags with her second double of the day to drive in two more runs, and later, Sunseri’s two-run shot to left field gave the Tigers a commanding 8-0 lead. The Aggies ended the inning trailing 8-2 after getting on the board with a two-run homer of their own.

LSU scored another three runs in the top of the third thanks to Pleasants who hit her third double of the game that drove in three runs. However, in the bottom of the third inning, the Aggies responded with four runs to cut into the deficit, 11-6. Texas A&M put up two more runs in the seventh inning to trim LSU’s lead down to three runs, 11-8, but Kilponen delivered strikeout No. 6 and a groundout ended the game.

The LSU-Texas A&M series will have its final game at noon CT on Sunday, April 10.