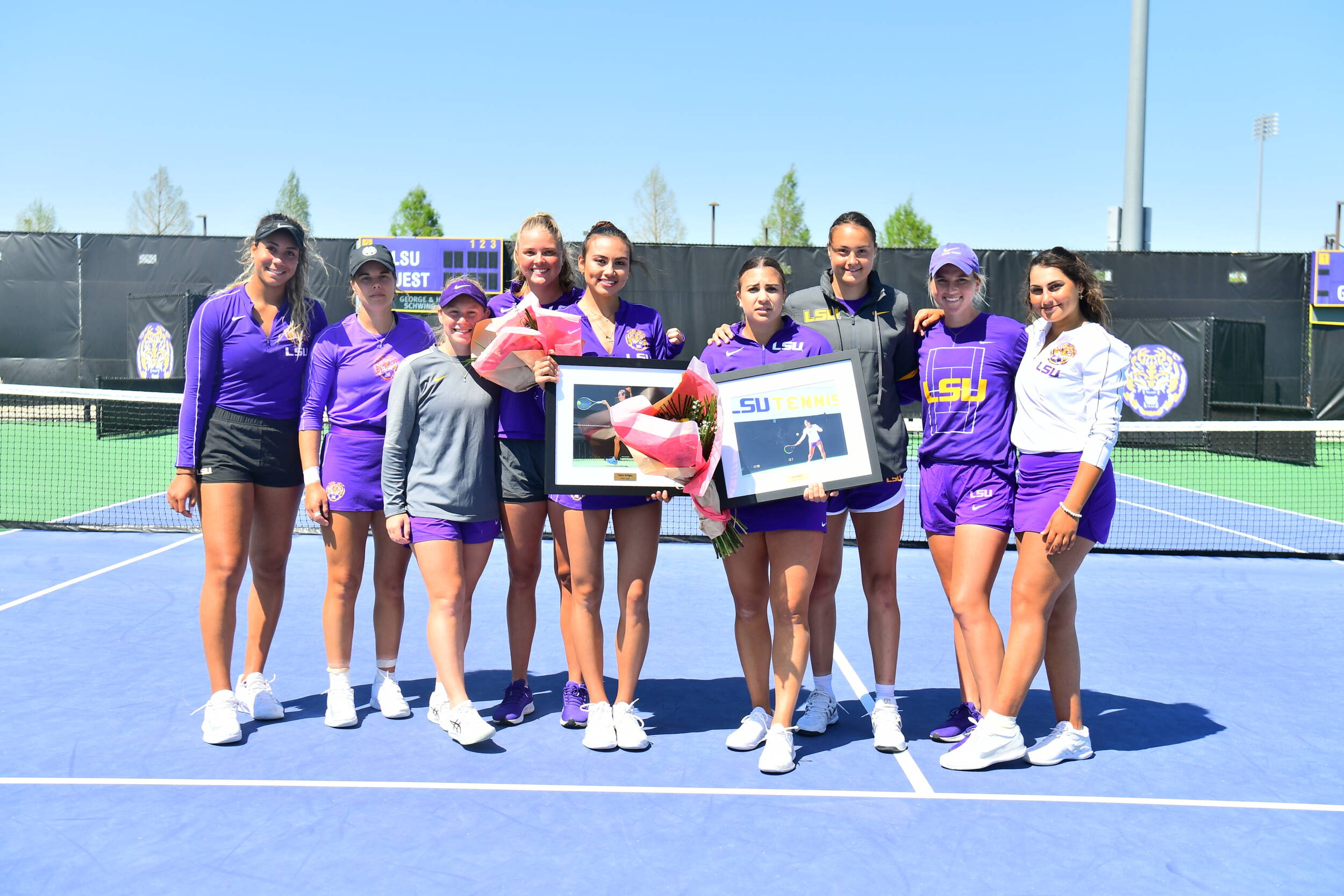 Selling Points
“Today we celebrated Taylor and Ena for their amazing contributions on and off the courts as Tigers,” co-head coach Michael Sell said. “They’re both tremendous women who added so much value to LSU and our program.”

“We faced one of the nation’s best today and went toe-to-toe with them in many matches. We just need to take advantage of the opportunities we create for ourselves, but full credit to Texas A&M for the win today and the strong season they are having. We’ll recover this weekend to gear up for the final stretch of matches. We’re looking to finish the conference season strong.”

Doubles Results
Texas A&M got off to a fantastic start in double as the No. 45-ranked duo of Carson Branstine and Mary Stoiana defeated Safiya Carrington and Rania Azziz by a score of 6-2 at the No. 2 spot.

The doubles point was clinched at the No. 3, where Gianna Pielet and Renee McBryde were victorious over Nina Geissler and Mia Rabinowitz by a score of 6-3.

Singles Results
No. 63 Stoiana grabbed the first singles point of the afternoon as she defeated No. 125 Ena Babic by a score of 6-0, 6-1.

No. 16 Tatiana Makarova clinched the match at the No. 2 singles spot as she defeated Geissler in straight sets, 6-2, 6-2.

Texas A&M made it 5-0 on the afternoon at the No. 6 when Katya Townsend defeated Rania Azziz. Despite winning in straight sets, Townsend and Azziz went to tiebreakers for both sets, with Townsend narrowly winning the first by a score of 7-5 before winning the second by a 7-3 scoreline.

Pelet defeated doubles foe Rabinowitz in a three set match at the No. 5. Rabinowitz claimed the first set by a score of 7-5 before Pielet responded with a strong second set as she blanked Rabinowitz 6-0. The third set was a strong display from Pielet, who only dropped two games en route to a 6-2 win and to make it 6-0 in the match.

The final point came from the No. 1, where No. 23 Carson Branstine faced No. 81 Safiya Carrington. The two contested an even first set, requiring a tiebreaker to decide the court that was won by Branstine by a score of 7-5. Carrington replied with a strong showing in the second set, winning 6-3 to force a ten point tiebreaker in the decisive third set. Branstine and Carrington exchanged points early before Branstine was able to pull away right at the end to win 10-6 and secure the sweep for the Aggies.

Up Next
LSU will hit the road for the final away weekend of the regular season as they take on Missouri at noon CT on Friday, April 15th.