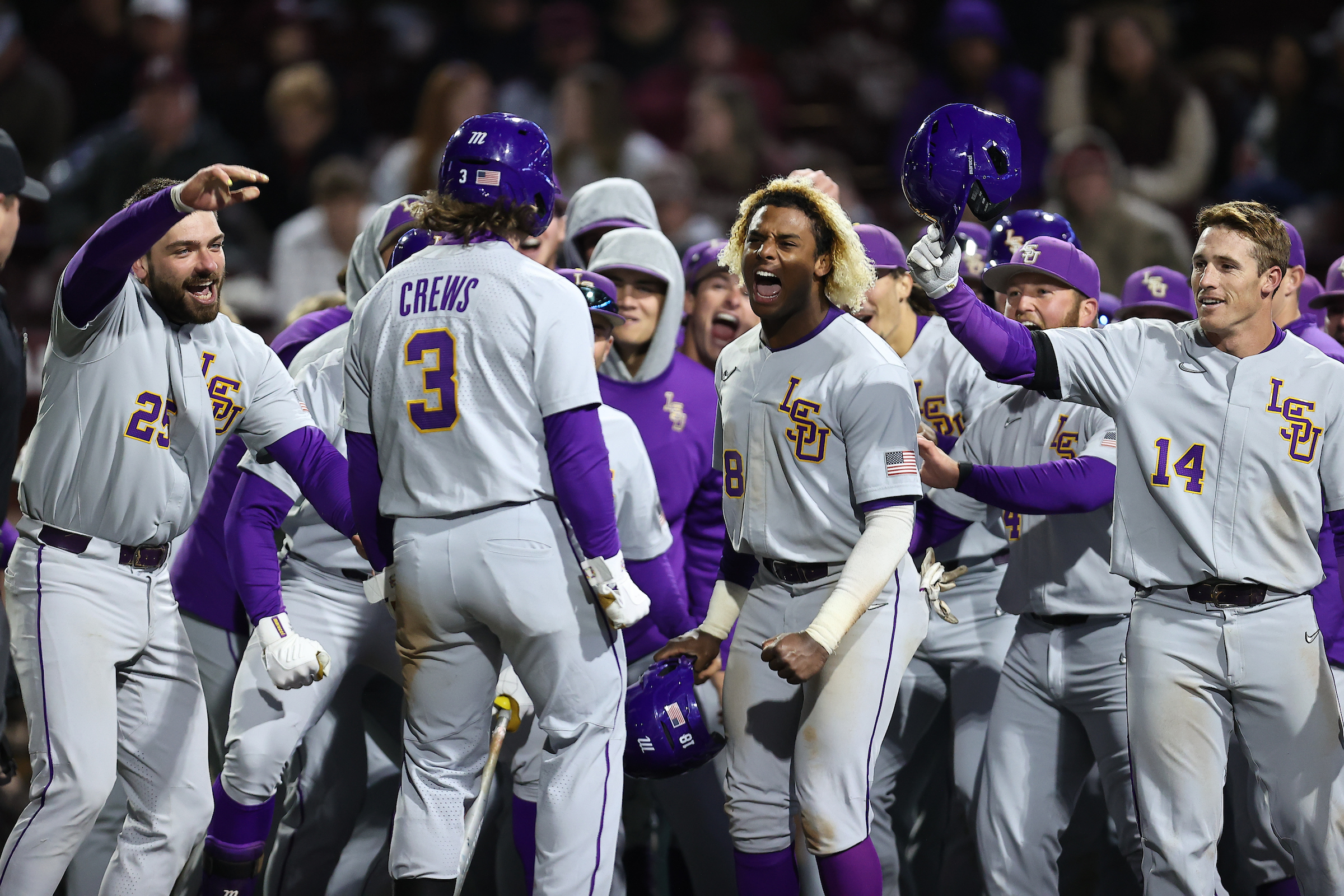 STARKVILLE, Miss. – LSU erupted for four runs in the top of the ninth inning Friday night to erase a 2-1 deficit and post a 5-2 win over Mississippi State at Dudy Noble Field.

The teams resume the series at 2 p.m. CT Saturday in a game that will be broadcast on the LSU Sports Radio Network and streamed on SEC Network +.

Mississippi State reliever Jackson Fristoe retired the first two hitters in the top of the ninth before the Tigers began their rally. Catcher Hayden Travinski walked, pinch hitter Josh Stevenson was hit by a pitch, and the runners moved to second and third on a Tristoe wild pitch.

“Tre’ is the guy we want up in that situation for sure,” said LSU coach Jay Johnson. “We had a feeling that he was going to see a slider right there, so we wanted Tre’ to sit on it and make sure it was up and over the plate. We didn’t want him to do too much; we didn’t need a homer, we needed a ball hit hard and low, and that’s what Tre’ did.”

Centerfielder Dylan Crews followed with a two-run homer against MSU reliever Brooks Auger to give the Tigers a 5-2 advantage.

LSU right-hander Paul Gervase retired the Bulldogs in order in the bottom of the ninth to earn his first save of the season.

Left-hander Riley Cooper (2-1), who pitched a perfect eighth inning, was credited with the win. Tristoe (3-3) was charged with the loss as he allowed three runs on one hit with one walk and one strikeout.

LSU starter Ma’Khail Hilliard worked the first six innings, limiting the Bulldogs to two runs on 10 hits with no walks and five strikeouts. Eric Reyzelman relieved Hilliard in the seventh with two runners on and no outs, and he brilliantly pitched out of the jam with a groundout and two strikeouts to keep LSU’s deficit at 2-1.

“Ma’Khail executed the game plan the way we wanted him to,” Johnson said. “He’s tough, and we need toughness to win a series. If we have to win a game, he’s the guy we want on the mound.”

The Tigers took the lead in the fourth inning on a sacrifice fly by rightfielder Josh Pearson, but Mississippi State struck for two runs in the fifth on a two-RBI single by first baseman Luke Hancock.