Tigers Take On Bulldogs in Starkville This Weekend 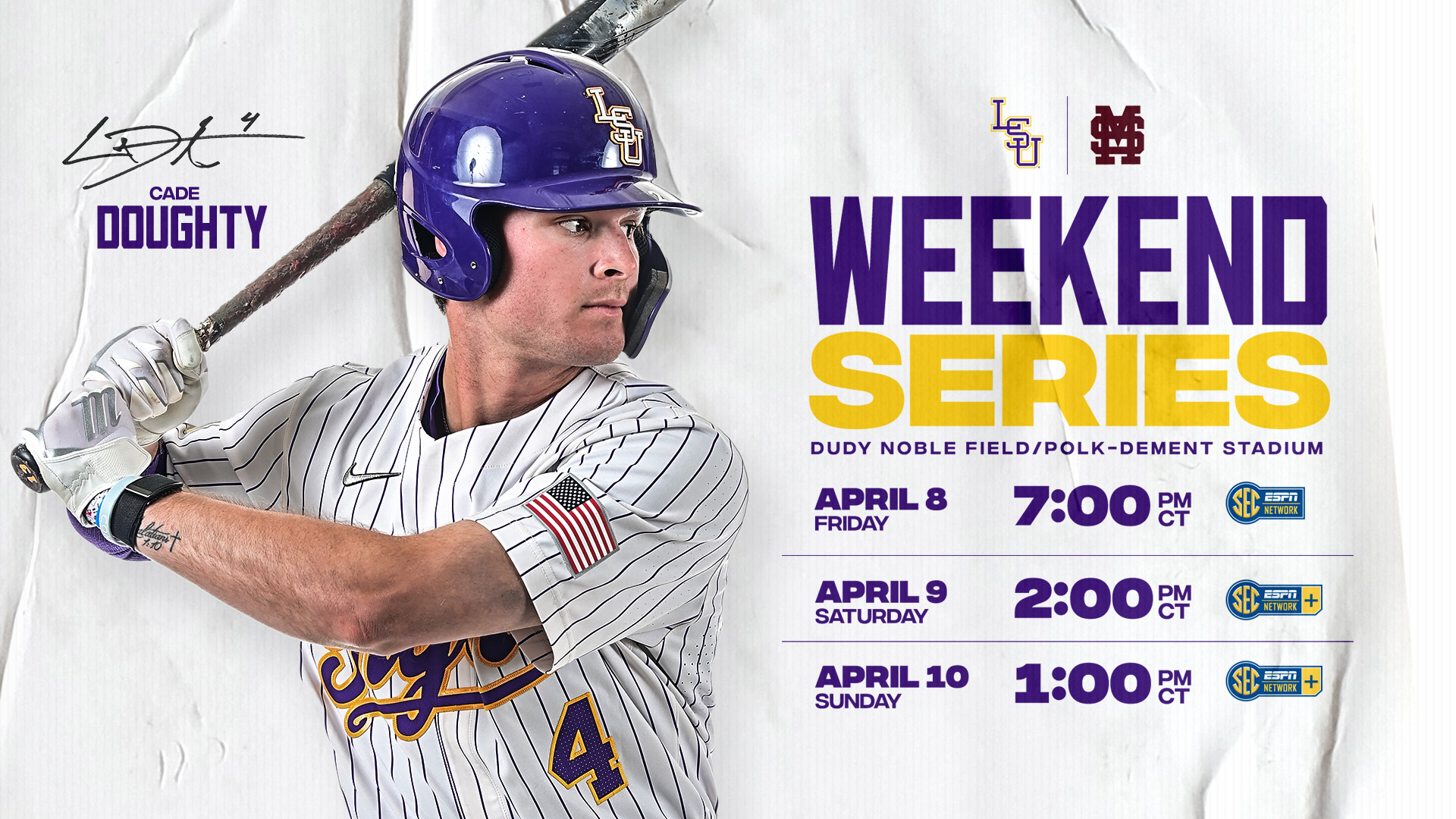 LSU SERIES RECORD VS. MISSISSIPPI STATE
Mississippi State leads the overall series with LSU, 208-191-1, but LSU has won 12 of the past 14 SEC regular season series with the Bulldogs … Mississippi State’s series win in Baton Rouge in 2016 in broke a string of nine straight series wins for LSU over MSU from 2007-15 … LSU has won three of the past four series – a three-game sweep in 2017, and 2-1 series victories in 2018 and 2019 before the Bulldogs captured a 2-1 series victory last season in Baton Rouge … in 2017, LSU was 5-0 against Mississippi State, including a two-game sweep of the NCAA Super Regional in Baton Rouge to advance to the College World Series.

QUOTING COACH JAY JOHNSON
“Mississippi State is the defending national champion, and they’re plenty good enough to beat anybody in the country and go back to Omaha. We’re going to have to play our best to be successful. They have a great facility and a tremendous environment; we’re looking forward to getting in there and competing.”

ABOUT THE TIGERS
• LSU posted a 16-3 midweek win over Grambling on Tuesday … LSU pounded out a season-high 18 hits, including four home runs … catcher Hayden Travinski launched two homers and collected three RBI to lead LSU’s offensive output … rightfielder Jacob Berry was 3-for-3 at the plate with a homer and two RBI, and centerfielder Dylan Crews homered and drove in two runs … second baseman Jordan Thompson doubled and produced three RBI, as the Tigers matched their season high of 18 hits, a mark they also reached on March 13 versus Bethune-Cookman.
• LSU, which is 4-5 in the SEC, enters the Mississippi State series in a five-way tie for third place in the Western Division, three games behind first-place Arkansas (7-2).
• LSU’s batters have been hit by a pitch 72 times in 29 games … the Tigers lead the nation in batters hit-by-pitches, and the next-closest SEC team in that category is Auburn with 44 HBPs.
• LSU is near the top of the SEC in several offensive categories, including batting average (No. 2 – .307); slugging percentage (No. 2 – .539); on-base percentage (No. 2 – .426); runs scored (No. 2 – 264); base hits (No. 2 – 308); RBI (No. 2 – 246); doubles (No. 2 – 67); home runs (No. 4 – 51) and total bases (No. 2 – 540).
• Infielder Cade Doughty leads the SEC in doubles with 14, and outfielder Dylan Crews leads the SEC in triples with four … Crews is No. 2 in the league in runs scored (34), INF/OF Jacob Berry is No. 2 in base hits (43) and DH Brayden Jobert is No. 2 in RBI (38).
• Senior right-hander Ma’Khail Hilliard defeated Auburn last Friday, blanking the visiting Tigers during his 5.1 innings outing … Hilliard limited Auburn to no runs on four hits with two walks and seven strikeouts.
• Sophomore right-hander Eric Reyzelman made three appearances on the mound last week, recording 4.2 shutout innings with three hits, no walks and eight strikeouts … sophomore left-hander Riley Cooper fired 3.2 shutout innings over two appearances last week with two hits, no walks and five strikeouts … sophomore right-hander Bryce Collins worked 3.2 scoreless innings in relief last Thursday versus Auburn, allowing four hits with two walks and five strikeouts.
• The LSU pitching staff is No. 3 in the SEC in ERA (3.54); No. 3 in opponent batting average (.215); No. 4 in fewest earned runs allowed (102); and No. 5 in batters struck out (305).

ABOUT THE BULLDOGS
• Mississippi State is the reigning College World Series champion; the Bulldogs defeated Vanderbilt in the 2021 CWS Championship Series.
• The Bulldogs are hitting .270 as a team with 48 doubles, two triples and 54 home runs … Mississippi State is No. 3 in the SEC in homers, trailing only Tennessee (71) and Florida (57).
• Mississippi State’s home run leaders are outfielder Kellum Clark and infielder/outfielder Hunter Hines, who each have nine dingers … Clark has five doubles and 28 RBI, while Hines has 32 RBI, seven doubles and one triple.
• The Bulldogs’ pitching staff ERA is 5.04, which is No. 12 in the SEC … sophomore right-hander Preston Johnson is No. 3 in the SEC with 57 strikeouts.

The Tigers are scheduled to face either Auburn or Kentucky at approximately 1 p.m. CT Thursday.
Series Recap vs. Vanderbilt

The Tigers will face either Auburn or Kentucky at 9:30 a.m. CT on Thursday.
Skip To Main Content