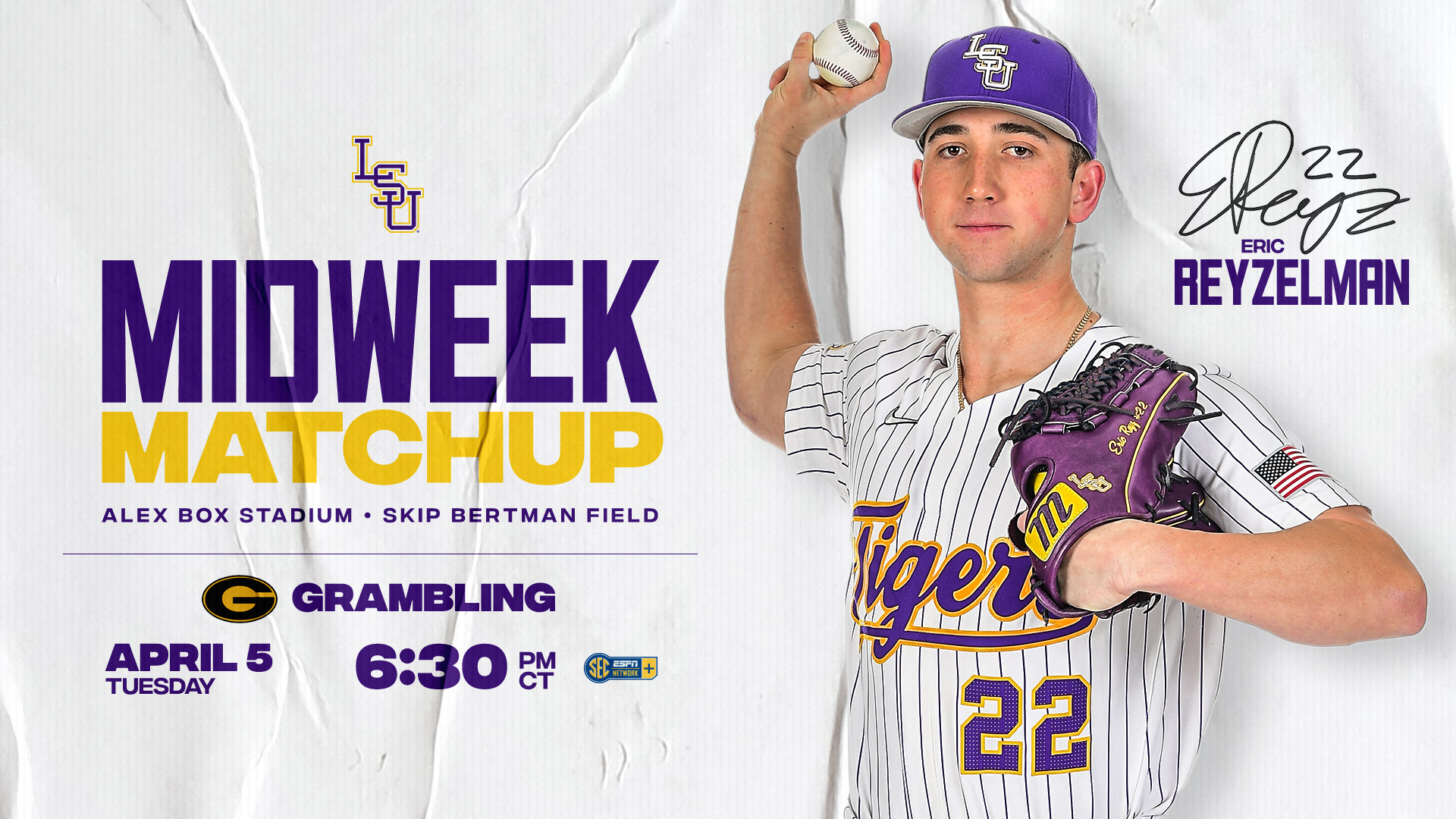 ONLINE
• The game may be viewed live on SEC Network +

LSU SERIES RECORD VS. GRAMBLING
LSU leads the all-time series with Grambling, 10-0, with all 10 games having been played in Baton Rouge, beginning with the first meeting between the schools in 2009. LSU defeated GSU, 7-0, on April 27, 2021, in the most recent meeting between the teams.

QUOTING COACH JAY JOHNSON
“Our players are still in the process of learning – I know they care, and I know they want to be good. We’re in the process of developing a winning attitude, and that comes back to baseball, playing baseball well. Some of it is mindset, some of it is ability, some of it is additional work, and we’re going to try to improve all of those things. The players want to win, and they are invested in being the best team we can be; we just have to play better.”

ABOUT THE LSU TIGERS
• LSU posted a midweek win over UL Monroe last Tuesday and captured one of three games versus Auburn over the weekend … the Tigers play host to Grambling State this Tuesday before beginning Week 4 of SEC play at 7 p.m. CT Friday versus Mississippi State in Starkville, Miss. … LSU, which is 4-5 in the SEC, is in a four-way tie for third place in the Western Division, three games behind first-place Arkansas (7-2).
• Sophomore third baseman Jacob Berry was LSU’s leading hitter in four games last week, batting .429 (6-for-14) with three RBI and four runs scored … sophomore shortstop Cade Doughty hit .389 (7-for-18) with two doubles, one homer, three RBI and five runs … sophomore catcher Hayden Travinski hit .385 (5-for-13) with one homer, two RBI and runs
• Sophomore designated hitter Brayden Jobert batted .353 (6-for-17) with one double, three homers, nine RBI and five runs … Jobert launched two homers and drove in seven runs last Tuesday to lead LSU to a 15-4 win over UL Monroe … Jobert became the first LSU player to collect seven RBI in a game since March 17, 2017, when Antoine Duplantis recorded seven RBI versus Georgia.
• LSU’s batters have been hit by a pitch 70 times at the halfway mark (28 games) of the regular season … the Tigers lead the nation in batters hit-by-pitches, and the next-closest SEC teams in that category are Auburn and Kentucky, each with 42 HBPs … LSU is near the top of the SEC in several offensive categories, including batting average (No. 3 – .300; slugging percentage (No. 2 – .522); on-base percentage (No. 2 – .419); runs scored (No. 2 – 248); base hits (No. 4 – 290); RBI (No. 2 – 232); doubles (No. 2 – 63); home runs (No. 4 – 47) and total bases (No. 2 – 504).
• Senior right-hander Ma’Khail Hilliard defeated Auburn last Friday, blanking the visiting Tigers during his 5.1 innings outing … Hilliard limited Auburn to no runs on four hits with two walks and seven strikeouts.
• Sophomore right-hander Eric Reyzelman made three appearances on the mound last week, recording 4.2 shutout innings with three hits, no walks and eight strikeouts … sophomore left-hander Riley Cooper fired 3.2 shutout innings over two appearances with two hits, no walks and five strikeouts … sophomore right-hander Bryce Collins worked 3.2 scoreless innings in relief on Thursday versus Auburn, allowing four hits with two walks and five strikeouts … graduate right-hander Trent Vietmeier made two appearances and recorded 3.0 scoreless innings with one hit, three walks and five strikeouts.
• The LSU pitching staff is No. 4 in the SEC in ERA (3.57); No. 4 in opponent batting average (.217); No. 5 in batters struck out (287); and No. 4 in fewest earned runs allowed (100).

ABOUT THE GRAMBLING TIGERS
• Grambling posted three-game Southwestern Athletic Conference sweep at Alcorn State last weekend, including a 32-10 win on Saturday … the Tigers are 6-3 in SWAC games this season.
• Grambling is batting .287 as a team with 49 doubles, eight triples, 26 homers and 43 steals in 58 attempts … the Tigers’ pitching staff has a 5.60 cumulative ERA and is allowing a .254 opponent batting average.
• The Tigers are led at the plate by utility player Shemar Page, who is batting .382 with seven doubles, two triples, one homer and 14 RBI … catcher John Garcia is hitting .345 with five doubles, five homers and 27 RBI … infielder Cameron Bufford leads the team with six homers, and he has driven in 21 runs.