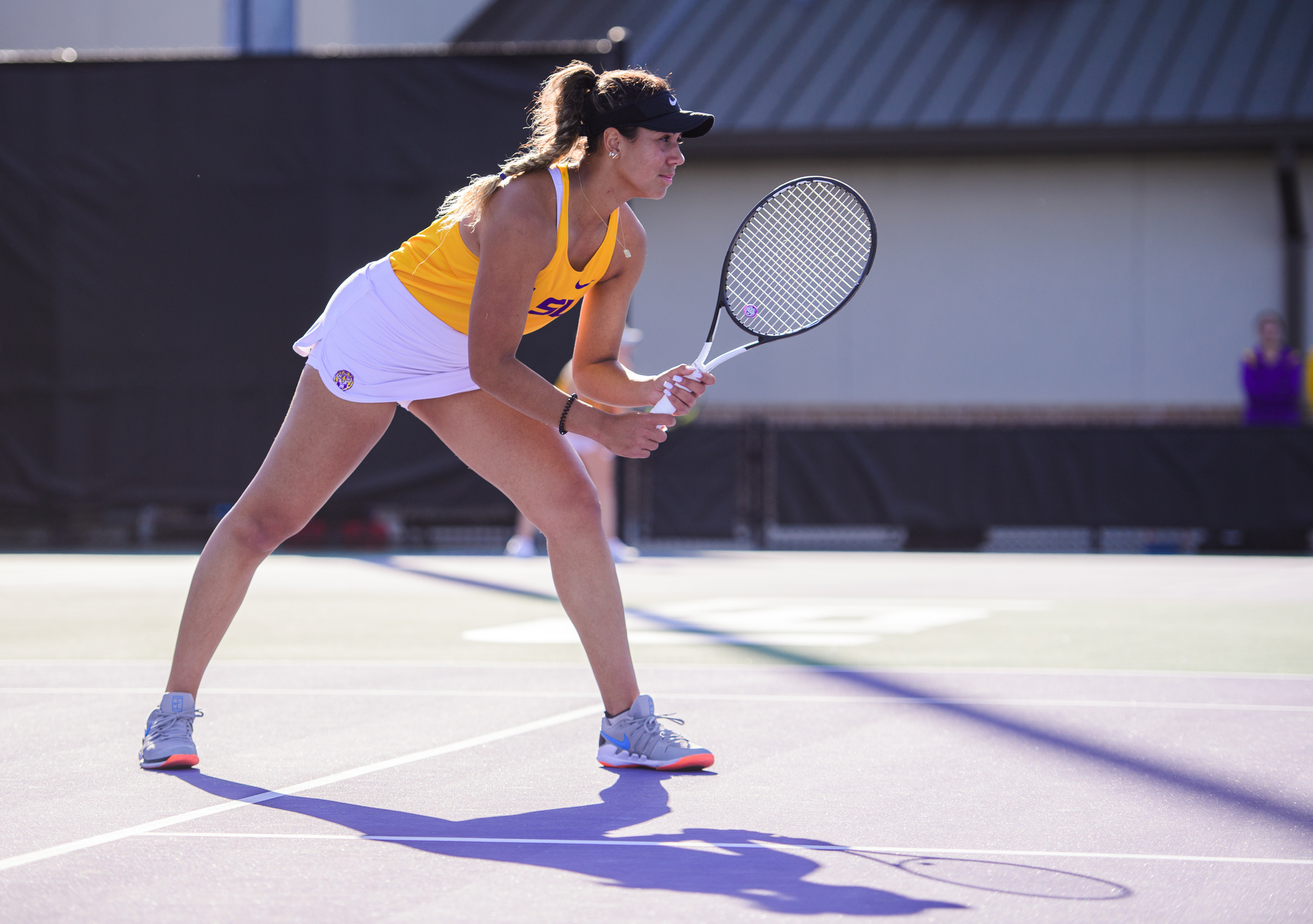 Selling Points
“Tough final result,” co-head coach Michael Sell said. “We’re extremely proud of the fight and determination of this team. We had multiple opportunities in singles and doubles to cross the finish line as we put ourselves in position to win. We’ll regroup and be ready for another tough battle on Sunday.”

Doubles Results
Anna Parkhomenko and Petra Sedlackova gave Alabama a strong start to doubles play as they defeated Taylor Bridges and Safiya Carrington by a score of 6-0 at the No. 2 spot.

Nina Geissler and Mia Rabinowitz grabbed a win for the Tigers at the No. 3 spot, where the Tiger duo defeated the sister pair of Kasia and Ola Pitak by a score of 6-3.

The Crimson Tide clinched the doubles point and a 1-0 lead in the match at the No. 1 spot, where Loudmilla Bencheikh and Anne Marie Hiser defeated Ena Babic and Maggie Cubitt in a back-and-forth match by a score of 7-5.

Singles Results
The Crimson Tide took a 2-0 lead on the night after Hiser defeated Bridges by a score of 6-1, 6-1, at the No. 5 singles spot.

Alabama extended the lead to 3-0 No. 107 Sedlackova defeated No. 94 Babic in a ranked battle at the No. 3 spot. Sedlackova and Babic swapped games in the first set before requiring a tiebreaker, which the Alabama player was able to claim by a score of 7-4. Sedlackova recovered from a slow start to the second set and grabbed a 6-4 win to secure a straight set win.

LSU got its first point of the night from the top spot as No. 70 Carrington defeated No. 74 Bencheikh in three sets. Bencheikh struck first with a 6-2 win in the first set before Carrington flipped the script in the second and responded with a strong 6-3 win of her own to force a third. The third set opened with an even exchange of games before Carrington pulled away and was able to hold on and win 6-4 to claim her fourth ranked singles win of the season and 11th on the year.

The lead was cut to 3-2 on the night as Rabinowitz claimed a gritty straight set win over Kasia Pitak at the No. 6. The match was an even contest from start to finish, with the first set requiring a tiebreaker that Rabinowitz was able to narrowly win by a score of 8-6. The second set was another back-and-forth match as the two competitors once again found themselves in a set tiebreaker. Rabinowitz strung together consecutive points and went on to win the tiebreaker 7-3 to earn her sixth singles win of the year and second in SEC play.

It was all square at 3-3 after Geissler’s three set win over Ola Pitak at the No. 2. Geissler started in fine form as she only dropped one game in the first set to win 6-1. The second set saw Pitak turn around a slow start as she narrowly edged Geissler, 7-5, to force a third set to decide the court. Geissler recovered from her second set stumble and, after a dicey start, pulled ahead and went on to win the third set by a score of 6-4 to tie the match. The win is the seventh of the season in singles play and fourth conference win, a team high.

The match was decided at the No. 4, where Cubitt took on Parkhomenko. Cubitt started well and claimed a 6-2 win in the first set before Parkhomenko equalized with a 6-4 second set win to move the match to a third set. The third set saw Cubitt fall behind early and fight off multiple match points to tie it up at 5-5 and eventually move the set to a tiebreaker. The tiebreaker saw both players trade points and face match points, with neither player able to pull away. Parkhomenko was able to string together three straight points right at the end and win 10-8 to stop the Tigers’ comeback attempt short and give Alabama a 4-3 win in the match.

Up Next
It’ll be a Battle of the Tigers at the LSU Tennis Complex when No. 9 Auburn comes into town at 11 a.m. CT on Sunday morning.