Stone, Lindblad Both Advance To Augusta; Stone Tied For Lead

LSU's Latanna Stone tees off on No. 8 at Augusta National in Friday's practice round. 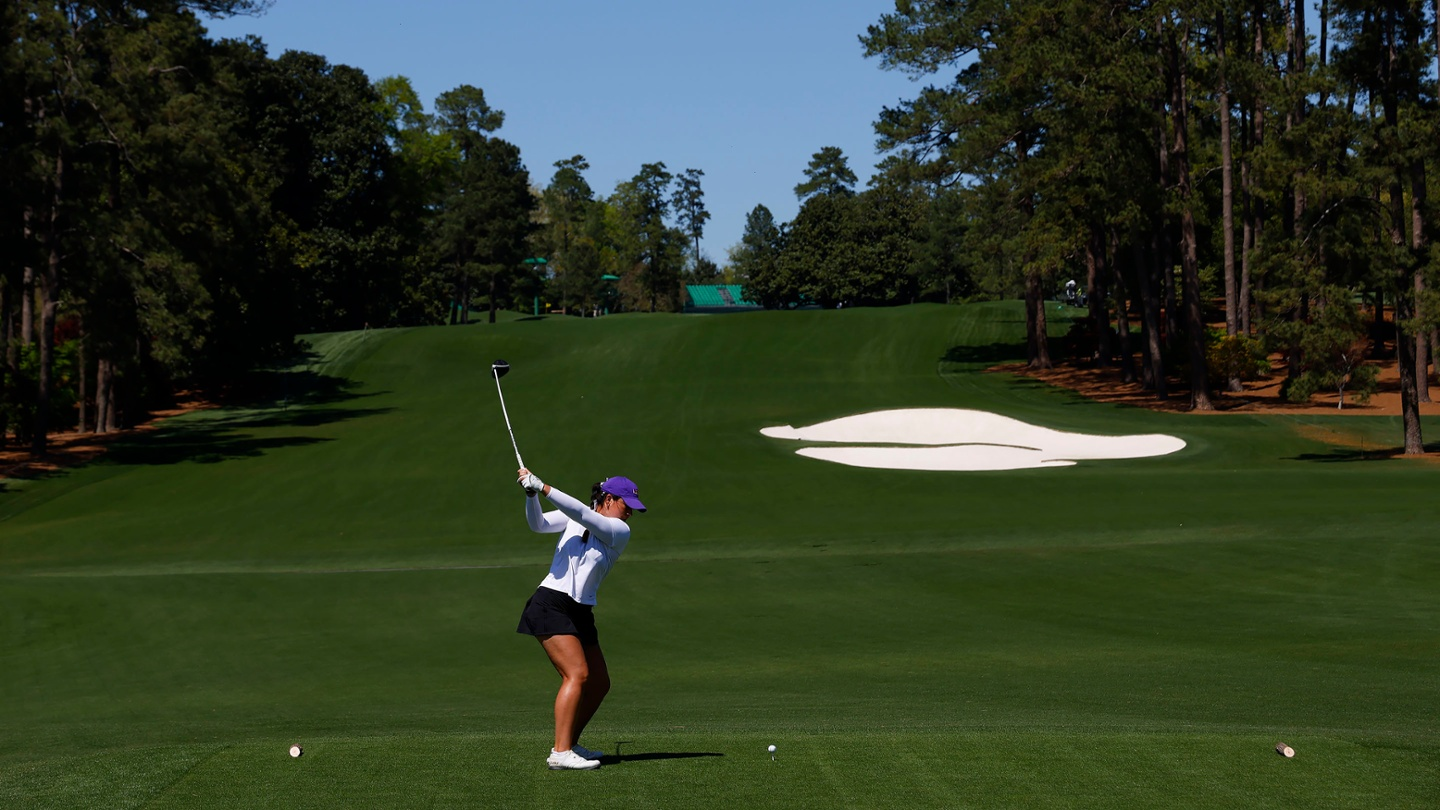 AUGUSTA, Georgia – LSU junior golfer Latanna Stone ability to “keep it simple” has her tied for the lead heading into Saturday’s final round of the Augusta National Women’s Amateur.

After two rounds played at Champions Retreat, Stone and Beatrice Wallin are tied at even par 144. The two will play in the final grouping as the tournament moves to the nationally-televised final round at famed Augusta National Golf Club.

If “simple” was a good word for Stone to remember, then “patience” might have been another good word for the second round that started some seven hours late on Thursday after a lengthy weather delay and then forced a return for a finish on Friday morning.

Stone started Thursday on the 10th hole and except for a birdie on her fourth hole of the round (No. 13), she posted all pars until play was suspended due to darkness after she had finished 15 holes. That put her up on the seventh hole (her 16th of the round) early Friday morning.

“I had only three holes left,” the Florida native said. “and I was kind of nervous, but I was just really excited to have only three holes and not like a whole nine. I’ve just been trying to keep it simple — fairways, greens, two-putt and kind of get off. I’m not trying to do anything special. I know there’s not a lot of birdies out there, and I’m just trying to stay patient.”

That was never more evident than the first hole she played.

“It was kind of tough to wake up a little bit. It was a bit cold, but I try not to think like that. I was just like, okay, let’s just par the three holes,” said Stone. “But then I like plugged it in the bunker on 7. I made it up and down luckily, but I was like, okay, that could have been really bad. Let’s brush that off and go on to the next hole.”

That next hole, the par 3 eight, resulted in a birdie that moved her into the lead and she parred the final hole to post her second straight round of 72.

Wallin, a Swedish senior at Florida State who has made the cut in all three amateurs, shot a 1-under 71 to get back to even par 144.

LSU junior Ingrid Lindblad also had to complete her round on Friday morning, finishing with a five-over 77 to complete 36 holes at 4-over par 148. That puts her in a group tied for 16th going to Saturday’s final round, four shots out of the lead. But it did put her well inside the cut line of the top 30 to play the final round.

It will be Lindblad’s second time to play Augusta National as she finished tied for third in last year’s ANWA.

Both Stone, a 2014 Finalist in the Drive, Chip and Pull competition at Augusta National, and Lindblad were able to play a practice round at Augusta on Friday afternoon and Stone may have some local knowledge to rely on for the trip around one of golf’s most well-know 18 holes that to an Augusta caddie named Rowdy.

“He’s really good at yardages,” she said. “I didn’t have to do a thing. It was nice. I just go up there, take a sip of water, and he’s already got the yardage. Helped me read putts and kind of like helped me with my mental game, just kept saying stay committed. Stay committed to your shots … I’m just going to listen to him and kind of have him tell me what to do and I’ll do it.”

Live coverage of the final round will be on NBC Sports beginning at 11 a.m. CT with Mike Tirico, Paige Mackenzie, Trevor Immelman and Kay Cockerill leading the coverage. Lindblad will tee off at 8:10 a.m. CT and Stone will tee off in the final group at 9:20 a.m. CT.