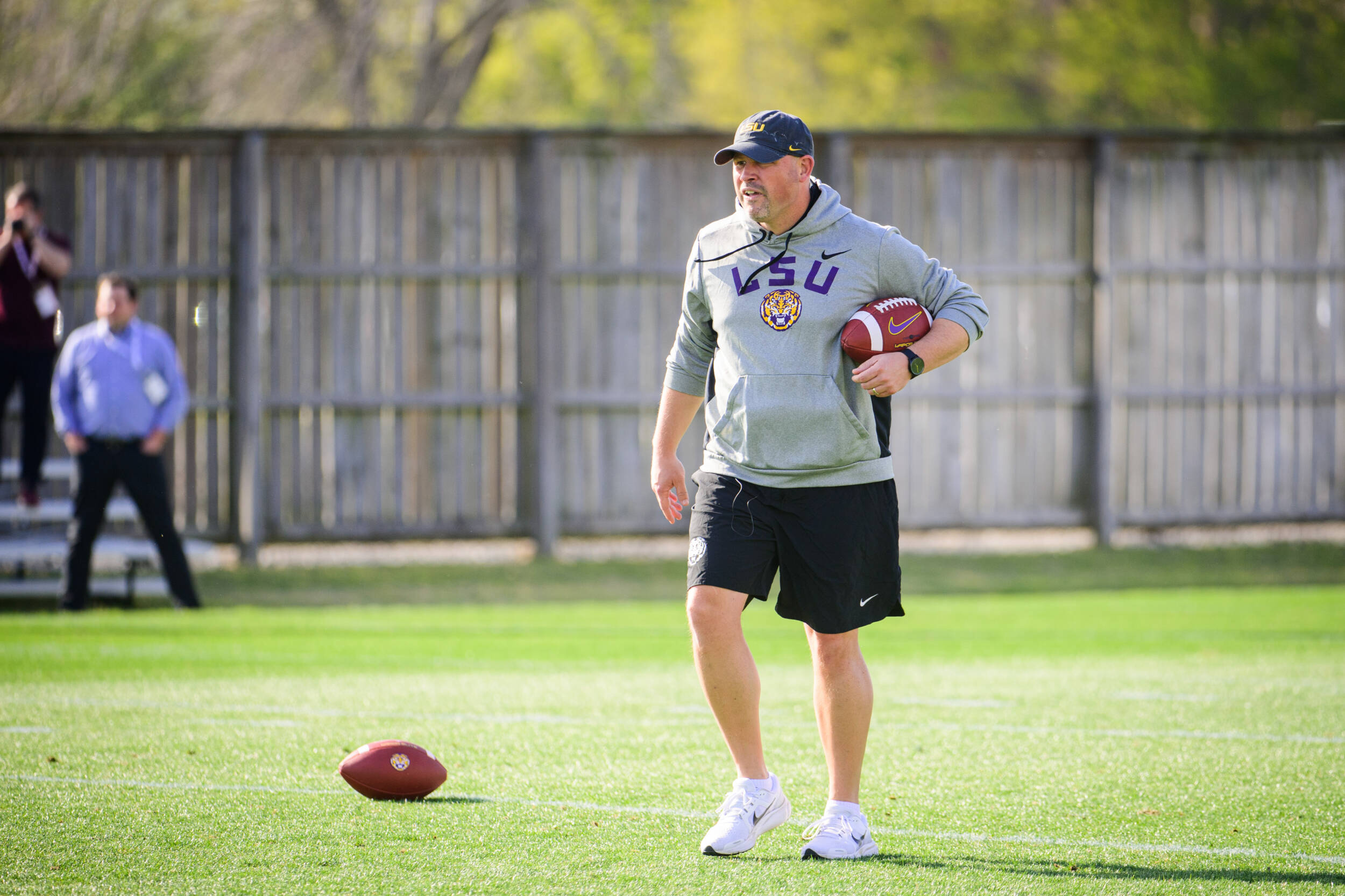 New defensive coordinator Matt House sat down with LSU’s Emily Dixon in an exclusive Q&A session. House talked about his coaching style, his decision to come to Baton Rouge, the NFLSU brand, coaching Tyrann Mathieu during his time in Kansas City, and more.

Emily Dixon: How would you describe the culture and team that Brian Kelly wants to build here at LSU?

Matt House: I think it’s all about the development of the person. We’re hunting traits and developing habits that will last guys a lifetime, and at the end of the day, help us graduate as champions.

ED: When working with the defense this offseason, what are some of the top things on your checklist? I know you’ve got a long checklist.

MH: The number one thing is the grit to strain play in and play out. We want to be a defense that is full of great tacklers. It’s athletic, runs to the football, is disruptive and takes it away. Then, also just for our players, learning our scheme and fundamentals associated with it. So to me, the spring is all about developing a mentality and a culture, how we want to play defense.

ED: Talk about your players — and you have a whole new group of guys to work with this year. So, what’s your approach when it comes to building relationships with this completely new team?

MH: I think just spending time with our players and being intentional about it, whether it’s time in a meeting room, time in the meal room, time out on the grass, I think the only way to build relationships is spending time with guys. That’s the fun part of coaching, right? Getting to know people and getting to know how they learn, and helping them produce at their highest level.

ED: Not only do you have new players, but you also have a whole new coaching staff. What’s it been like getting to know the other coaches on the defensive side of the ball and how you all are approaching that foundation of building a championship program?

MH: It’s been exciting. Everybody has different strengths and weaknesses in that room. It’s been fun, they’ve all been exposed to different things, and learning from each other and then coming together with a collective plan has been fun.

ED: Why LSU, right now, for you to come down here and coach?

MH: First of all, you’ve got an unbelievable university with great history and tradition. You’ve got a head coach who is the winningest coach in college football that you’re learning underneath. You’ve got the opportunity to recruit the best players around. You’ve got a current roster that has great potential, and it’s a great place to live. So there’s a lot of reasons to come to LSU.

ED: I’ll ask you about some specific former players in a second. But if you went back and pulled some of your former players, how do you think they would describe you as a coach?

ED: You coached one of the NFL’s best players in Aaron Donald and you won a Super Bowl with the Chiefs. What did you take away from experiences like those that you want to instill in the guys here?

MH: Coaches’ traits couldn’t be more dead on and, in particular, habits. The great players, the great teams, they don’t get by just with talent, they get by with a way of preparation, a focus about preparation, intentional, to being detail-oriented. That’s one of the things that, if you just look at their approach, and the habits that it takes, those guys have those habits, those teams have those habits.

ED: You coached a defense that had Tyrann Mathieu, one of our favorites around here, who is one of the best ever to wear purple and gold at LSU. When you reflect back on your time together, what stands out with your relationship?

MH: One, he loves the game. It’s fun when you’re with a player that just can’t get enough of the game of football and the process that goes into the preparation to being great. That’s what sticks out about T5. The other thing that I love about T is how much he loves people. You know he loves this university, but he loves people and he loves to see people succeed.

ED: Any play or anything from your time together that stands out?

MH: I hope he watches this. But the shake in the head, our players aren’t going to be allowed to do that.

ED: He did a lot of that in 2011 over here. In your introductory press conference, one of my favorite quotes that you were talking about is that you’ve never been around a group of players that love their university, and promoted it as much as guys in the NFL from LSU in that NFLSU brand. How have you seen that, being in the NFL as a coach, all of the guys that are in the league year in and year out?

MH: They’ve just got great pride in this place. They love and they bleed with their football team. You could always see some of the guys’ moods on how the game went on Saturday night. As we have Saturday night meetings, the game’s either going on or we’re coming out of a meeting and they’ve missed a quarter. The first thing they do is run to check the TV. The LSU gear that’s worn in the hotel — and not every university is always on display. Those guys are always representing the Tigers.

ED: You and your wife Jessi have four children, how do you do that football, family life balance?

MH: First of all, my wife is a saint. She’s awesome. The things she does to allow us to do this. My kids love the game. My kids don’t know anything but the game. One of the advantages of coming back to college is they get to be around the game more than you do in the NFL. They’re excited about that. My oldest son is running around practice now. The thing that Coach Kelly wrung out to me is when he talks about the program, he says your family is a part of the program. That resonated with my wife and my kids.

ED: How excited were they when you said you were coming down to LSU?

MH: They were fired up. They’re excited and I think they’re even more excited to get here now. Especially now that my oldest is in school here in town.

ED: What is Matt House doing when he’s not coaching?

MH: I love to hang with the family. I love to cook out. If I have a lot of time I like to fish and hunt.