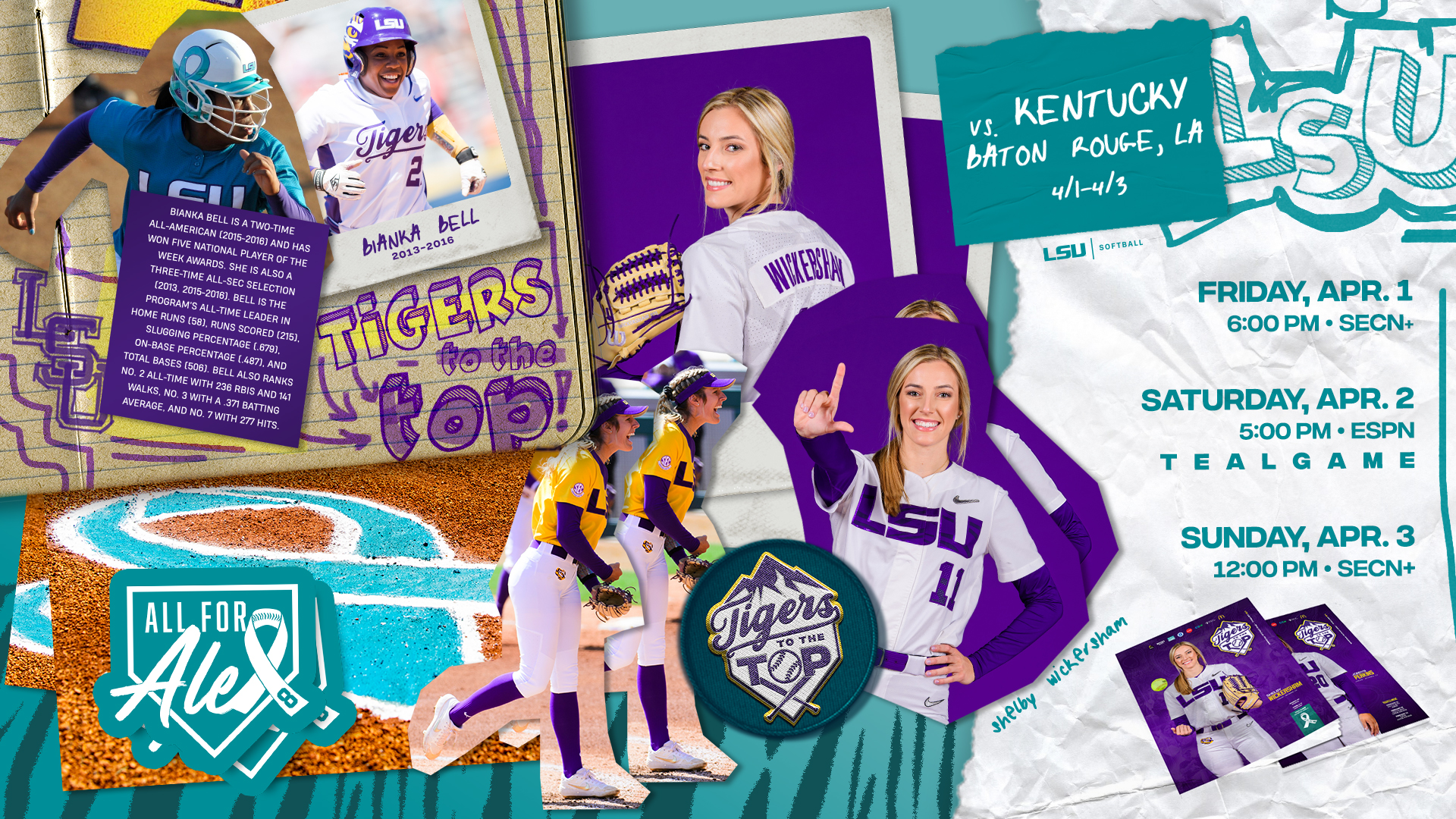 Friday and Sunday’s games will begin at 6 and noon CT and will be streamed on SECN+ with Lyn Rollins and Yvette Girouard on the call. Saturday’s 5 p.m. game will air on ESPN with Courtney Lyle and Danielle Lawrie calling the action. Patrick Wright will call each game on the LSU Sports Radio Network on 107.3 FM in the Baton Rouge area.

Saturday, April 2 is the annual Strikeout Ovarian Cancer Game. The SEC softball community will be united on Saturday when all 13 teams participate in the “All for Alex” campaign to honor the legacy of Mississippi State’s Alex Wilcox. Teams will wear teal or teal accents on Saturday as the entire league recognizes her impact on the softball community nationwide and in the fight against ovarian cancer.

Prior to the game Saturday will be the Geaux Teal Walk beginning at 9:30 a.m. CT starting from Tiger Park. After the walk, food, music, and fun will be provided at Tiger Park. Fans can register to participate in the walk and make donations at www.geauxteal.com.

Sophomore Ciara Briggs leads LSU with a .417 batting average and ranks No. 3 in the league with45 hits and 35 runs scored. Sophomore Danieca Coffey has a .411 batting average and ranks No. 5 in the NCAA with 46 hits this season. Junior Georgia Clark has a .301 batting average and leads the SEC with 44 RBIs, a mark that stands at No. 3 in the NCAA. Clark’s 11 home runs pace the Tigers offense and is the third most in the conference. Sophomore Taylor Pleasants continues to trend upwards and is batting .412 in SEC games only with seven hits and three home runs. In the last 10 games, Pleasants is hitting .444 and has a .852 slugging percentage.

Junior Ali Kilponen is 11-4 in the circle this season and has a 2.06 ERA with 82 strikeouts (No. 7 in SEC) in 91.2 innings pitched. Kilponen has four shutouts, on no-hitter, nine complete games, and one save this season. Senior utility player Shelbi Sunseri has a 5-4 record on the rubber with a 2.38 ERA and 44 strikeouts. She also has one save and one shutout, while hitting .260 with 20 hits, nine home runs, and 24 RBIs. Sunseri ranks No. 3 all-time with 42 career home runs as an LSU Tiger. True freshman Raelin Chaffin is 4-1 this season and has logged 32 strikeouts, walked nine batters, and has two complete games and one shutout in eight appearances this season. Chaffin has a 3.15 ERA over 33.1 innings pitched.

LSU leads Kentucky in the all-time series 44-16. The Tigers have won four of the last five meetings and are currently on a two-game winning streak in the series.

The Wildcats are coming off a 3-0 loss to Ohio State after taking the three-game series, 2-1 against then-ranked No. 18 Auburn in Lexington, Ky. Kentucky opened its SEC slate on the road at then No. 3 Alabama where they lost the series 2-1 but one the final game of the series, 9-4. UK ranks third in the SEC with a .347 batting average and 281 hits, and fourth with 197 RBIs. The Wildcats have a 3.01 ERA (No. 9 in SEC) and has 127 strikeouts this season.

Senior Kayla Kowalik leads the Wildcats’ bats with a .455 average and 45 hits and has a team-high 11 steals. Kowalik also contributes 18 RBIs with two home runs. Sophomore Erin Coffel follows with a .429 batting average and leads the team with 33 RBIs and matches senior Renee Abernathy with a team-high eight home runs. Freshman Alexia Lacatena is 6-2 in the circle with a team-low 2.83 ERA and has 23 strikeouts in 34.2 innings pitched. Junior Miranda Stoddard is 5-3 on the year and in 50.1 innings pitched she has a 3.62 ERA, with 26 strikeouts and just seven walks. Sophomore Stephanie Schoono (3-2) has a team-high 28 strikeouts and two shutouts in 27.2 innings pitched. Schoono has a 4.30 ERA and has allowed 21 hits, 20 runs, and 24 walks this season.