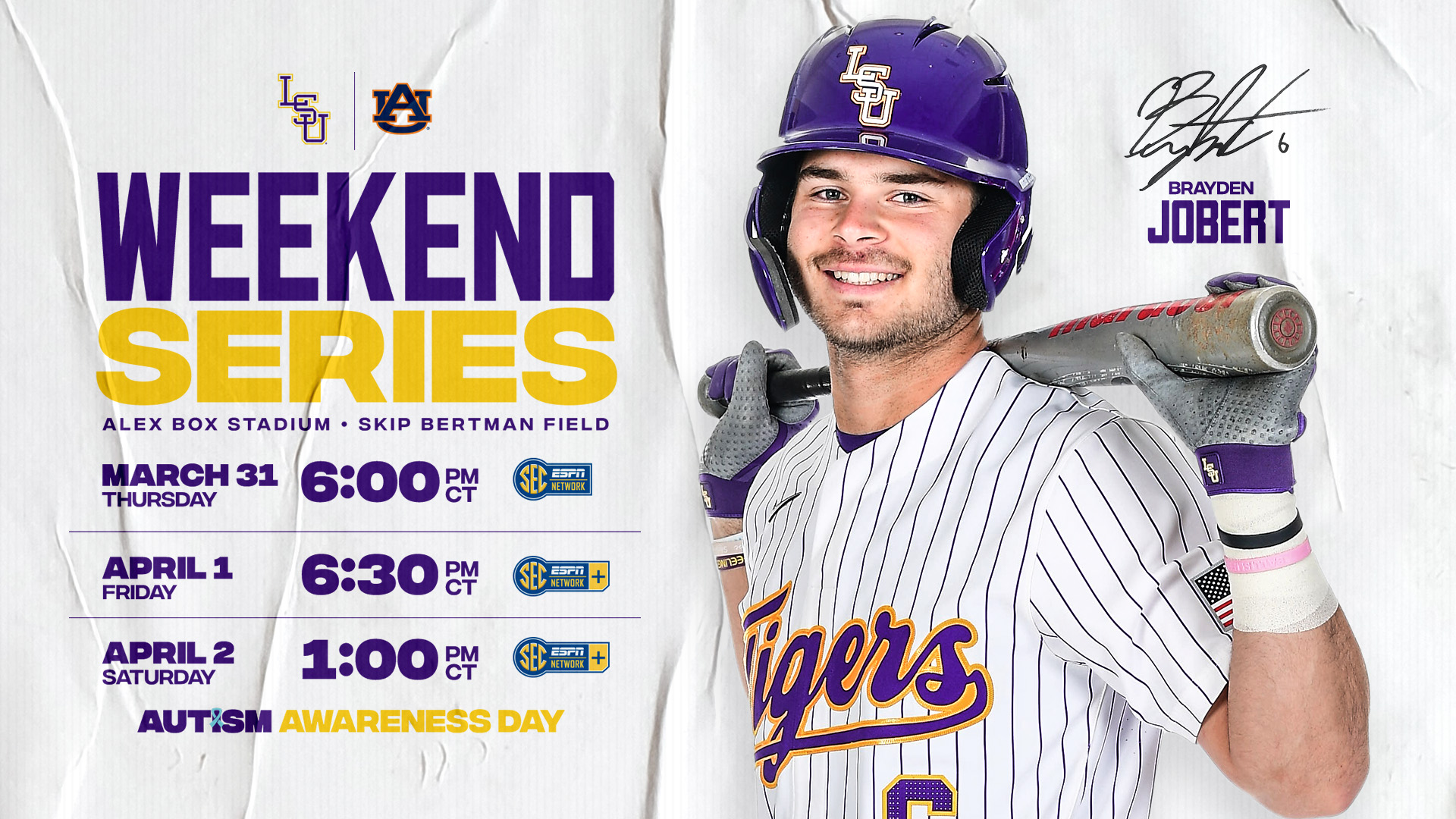 LSU SERIES RECORD VS. AUBURN
LSU has a 108-76 advantage over Auburn in a series that began in 1907 … LSU has won 20 of its last 26 games versus Auburn, including five wins in the past seven meetings … last season, LSU captured two of three games at Auburn’s Plainsman Park … LSU has won seven of the last eight and 15 of the last 22 SEC regular-season series between the clubs, dating back to 1999 … Auburn’s lone series win in the past eight series came in 2018, when it won two of three games at Auburn.

QUOTING COACH JAY JOHNSON
“Auburn is hitting home runs and hitting with power; they have a balanced lineup and a very good roster. They have a good, balanced pitching staff, so we’ll have to be sharp in terms of taking quality at-bats and taking care of the baseball, and our pitchers will have to execute. We’re excited for this challenge; our guys want to continue to work and improve on what they’ve accomplished so far, and this weekend provides an opportunity to do that.”

ABOUT THE LSU TIGERS
• LSU posted an SEC series victory over seventh-ranked Florida last weekend, marking the Tigers’ first series win in Gainesville since 2012 … LSU handed Florida its first SEC series loss at home since May 2019 … the Tigers defeated UL Monroe, 15-4, on Tuesday night for their third straight win … LSU, which is 3-3 in the SEC, is in a four-way tie for second place in the Western Division, two games behind Arkansas (5-1) … LSU has scored 42 runs on 33 hits in its past three games with eight doubles and 10 home runs … the Tigers’ pitching staff has limited opponents to 17 hits and a .175 cumulative batting average over the past three contests.
• Designated hitter Brayden Jobert is hitting .500 (7-for-14) in the Tigers’ last three games with a remarkable five homers and 16 RBI … he collected seven RBI in Tuesday’s win over UL Monroe, becoming the first LSU player to reach the 7-RBI mark since March 17, 2017, when Antoine Duplantis recorded seven RBI versus Georgia.
• Jobert led LSU to a series win last weekend at No. 7 Florida by batting .444 (4-for-9) in two games against the Gators with three homers, five runs scored and nine RBI … Jobert’s two-run homer in the fourth inning on Sunday broke a scoreless tie and ignited a four-run LSU outburst … Jobert later highlighted a seven-run sixth inning with a three-run dinger that gave LSU a 10-0 lead in the Tigers’ 11-2 win, as he collected a career-best five RBI in the game … his first homer of the weekend came on Saturday, when his three-run blast was the signature blow of a six-run third inning … Jobert also added an RBI single on Saturday in the ninth inning of the Tigers’ 16-4 win.
• Leftfielder Gavin Dugas is hitting .444 (4-for-9) during the Tigers’ three-game win streak with two doubles, two homers, four RBI and seven runs scored.
• Freshman right-hander Grant Taylor pitched LSU to a series-clinching win on Sunday over seventh-ranked Florida in Gainesville with the longest outing of his career … Taylor entered the game in the fourth inning in relief of fellow true freshman Samuel Dutton and pitched the rest of the game, limiting the Gators to two run on four hits in 5.1 innings with two walks and a career-best six strikeouts … beginning with the final out of the seventh inning, Taylor retired seven of the eight Florida hitters he faced to end the game … Taylor’s effort helped LSU hand Florida its first SEC series loss at home since May 2019.
• LSU’s 16-4 win over Florida on Saturday marked the Tigers’ second-largest margin of victory in a game played at Gainesville … the largest margin of victory for LSU in Gainesville was 14 runs when the Tigers defeated the Gators, 18-4, on March 1, 1986 … LSU outscored the Gators, 29-13, an outhit Florida, 29-17, in last weekend’s series … the Tigers pounded out 14 extra-base hits in three games, including six doubles and eight home runs.
• Infielder Jordan Thompson batted .417 (5-for-12) in the Florida series with two doubles, four runs and one RBI … Thompson started Games 2 and 3 at second base, switching positions with Cade Doughty, the former second baseman who started at shortstop on Saturday and Sunday … catcher Hayden Travinski hit his first two homers of the season during the series, and centerfielder Dylan Crews homered and collected four RBI … first baseman Tre’ Morgan launched his first homer of the year on Sunday, and he drove in three runs.
• Senior right-hander Ma’Khail Hilliard defeated Florida on Saturday, blanking the Gators through the first five innings of his outing … Hilliard worked 5.2 innings, limiting Florida to four runs on five hits with no walks and seven strikeouts … freshman right-hander Samuel Dutton made his first career collegiate start on Sunday and shut out Florida in a 3.2-inning outing, allowing just one hit with three walks and one strikeout … the LSU pitching staff limited Florida to a .183 team batting average over the weekend, allowing just 17 hits in 93 at-bats.

ABOUT THE AUBURN TIGERS
• Auburn is 3-3 in the SEC, tied with LSU, Texas A&M and Mississippi State for second place in the SEC West … Auburn won two of three games at Texas A&M last weekend.
• Auburn is No. 3 in the SEC with a .309 team batting average, and it is No. 5 in the league in team ERA (3.77) … Auburn is led at the plate by first baseman Sonny DiChiara, who is batting .455 with 10 doubles, seven homers and 21 RBI … DiChiara leads the SEC in batting average, on-base percentage (.608) and slugging percentage (.924).
• Infielder Blake Rambusch is hitting .394 with six doubles, one triple, two homers and 21 RBI, and outfielder Kason Howell is batting .337 with 10 doubles, one triple, two homers, and 22 RBI … as a team, Auburn has 26 homers on the year and has recorded 17 steals in 24 attempts.