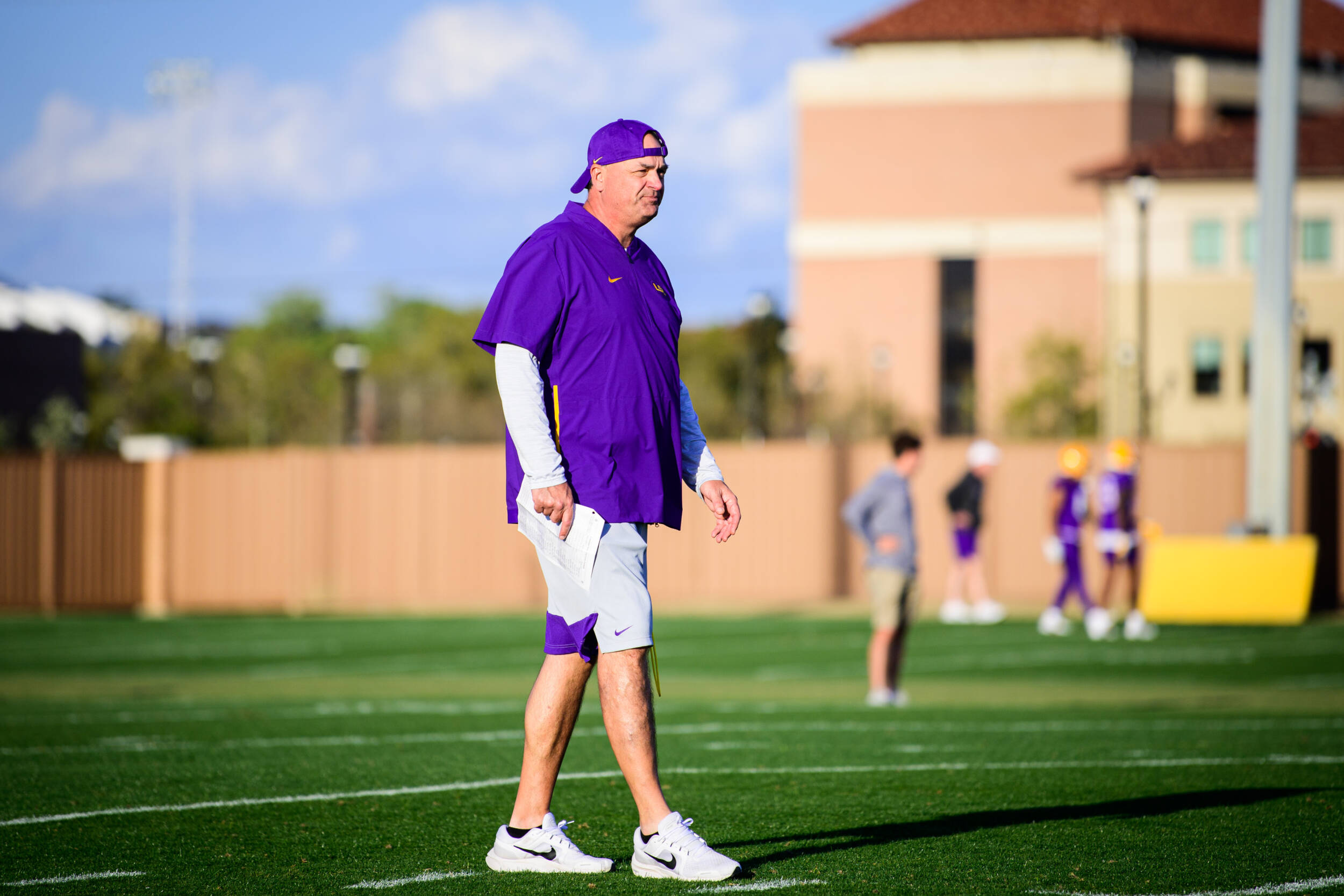 Earlier this week, LSU’s Emily Dixon sat down with new offensive coordinator Mike Denbrock in an exclusive Q&A session. Denbrock discussed his long-lasting relationship with Coach Brian Kelly, his decision to come to Baton Rouge and join LSU’s staff, what type of culture this staff is trying to implement, and more.

Emily Dixon: You have a very long history with Coach Kelly and you were grad assistants at Grand Valley State. I feel like nobody on the staff knows him better than you with all of your history. So, what is it about Coach Kelly that’s always gravitated the two of y’all to work together?

Mike Denbrock: I think the first thing is we just have similar philosophies of what it takes to be successful, and how to build winning football teams. From the very first time that we met, up until today, we’ve over the course of time, found those philosophies, but at their core, it’s always been about making sure the communication was clear to the players, that they understood the mission, that they had a clear picture in their minds of the things that they needed to do independently that go to winning and building a football team. Then, I think we’re both really, really competitive guys. We both enjoy winning, and we both enjoy being in the fray, whether that’s on the golf course or on the football field. I think those things have stood the test of time and helped us hold our relationship together over the years. We’re similar in so many different ways.

ED: How would you describe the culture and the team that Brian Kelly wants to build here at LSU?

MD: First is very disciplined in what they do, and how they go about what they do, day in and day out. I think number two, a group that’s highly competitive, that likes to be in those situations, to have that part of the game be part of who they are and what they are. Thirdly, building the camaraderie necessary that really develops a football team. Those things happen from the inside out. So we’re working very hard with the guys in the program to understand how important it is for them to trust and respect and love one another in the locker room, and that has a way of spilling over onto the football field. When they understand that and begin to kind of take ownership of that, you’ve got a chance to build something really special.

ED: So now we know why you and Coach Kelly work so well together. But for you, why LSU? And why right now to come down here to Baton Rouge?

MD: I don’t think anybody who has any awareness of college football doesn’t understand the importance of LSU on the national landscape. This is a place of national championships, not only in football, but all sports. Football, obviously, the National Championships that they’ve won attracted me here because I know it’s been done before. And it’s something that not only is expected, but something that I know that people around this university work very hard for every day. Secondly, it was an opportunity to work with Coach Kelly again. We’ve been together at two other stops on two other occasions and had a lot of success together and this was an opportunity to build on that and take on the challenge of putting LSU back at its rightful place above the college football world.

ED: What excites you about being at LSU, and having a clean slate to build an offense that you think fits this team well?

MD: It’s always about the players for me. That’s where it always starts. Having an opportunity to scheme and get my hands on the talent level that’s here, not only in the state of Louisiana, but around the country was very, very exciting. Then, having a chance to merge what Coach Kelly had done at the University of Notre Dame when I was there with him and then since I left, and bring some of my own ideas and thoughts and philosophies together and merge those two worlds together to create LSU’s offense that we’re going to use to be very successful in this league.

ED: When working with the offense this spring, what are some of the things at the top of your checklist?

MD:  I think identifying, first off, where the leadership is going to come from. A lot of people point to maybe just the quarterback position in particular for that. We’ve certainly got to sort that out and get a pecking order going there. But that’s really throughout the whole entire offensive unit. Who are our leaders? Who are the guys that we’re going to need to lean on? So that it’s not just coming from the coaches, if you will. But it’s kind of a team-oriented, a unit-oriented development of what we’re doing offensively. I think above that is, for the spring, in particular, getting our scheme installed, getting an understanding and our football intelligence up a little bit more when it involves what we’re doing scheme-wise, so that we can adjust it after spring football to what we really feel like we want to become in the fall. So the spring is not a complete experiment, but it’s a little bit of an experiment with new personnel with different schemes and different things that we’re doing, to find out what really fits the personnel that we have. Then we’ll go about adjusting it throughout the summer and fall camp to ultimately present to the fans and to the people that love LSU football, what we’re going to be offensively from a philosophy standpoint.

Listen to the message, not the tone of the message sometimes, and just understand that everything I do every day, from the time I wake up to the time I go to bed, is an effort to try to find a way to make them better at what they do.

ED: You talked a little bit about camaraderie. What’s your approach when it comes to building a relationship with a completely new, different group of guys?

MD: I think it’s incredibly important to dig deep into who they are, where they came from, their family, background, their dynamics at home, what they like to do, what they don’t like to do — just learn about them as people. I think the more that that trust is built between player and coach, and the more that they know that you look at them more than just a football player, the bigger opportunity you have to kind of get close to them, which allows them to open themselves up to what you have to say, whether good or bad, and it creates an opportunity for growth between them and the coach that’s coaching them.

ED: You went back and pulled some of your former players, how do you think they would describe you as a coach?

MD: Aggressive. Loud, probably. But I hope they would look at me as someone who has their best interests at heart. Listen to the message, not the tone of the message sometimes, and just understand that everything I do every day, from the time I wake up to the time I go to bed, is an effort to try to find a way to make them better at what they do.

MD: It’s been fantastic. We’ve got a great offensive staff that the room is a lot of fun to be in every day. There’s a lot of football knowledge in there that can be tapped into. We’re doing what we can to make sure ideas from all different philosophies and all different angles, get instituted into the whole of who we’re going to become. I think it’s important that everybody in that room understands that their voice is important, that the knowledge that they’ve gained over their years of experience is important. I want to hear those things. It’s been fantastic because number one, what Coach Kelly has done is put together a staff of really good people, number one. Fun people to be around people that are like-minded and like-hearted in that it’s all about the players. And once you have that, then you know what you’re going to run scheme-wise and all that kind of stuff is important, but it’s secondary to making sure that the level that you start with is built on a foundation of good people first and we’ve certainly got a bunch of those.

ED: What does Mike Denbrock do when he’s not coaching football?

MD: Spend time with my son as much as I possibly can. I have a 10-year-old son named Chance who is the best thing that happened to me in my life, by far, and so that’s where most of my time goes when I have some free time. Beyond that, I love to get out on the golf course when I can, love family time of any kind. I think that’s probably about it. It’s a pretty empty life. (Chance) cannot wait to to get down here. He’s back in Cincinnati finishing his school year and my family will join me in June. I miss him like crazy, but we understand my hands are full of things to get done down here and he’s got to finish the school year, and my wife and my son will be here soon enough and we look forward to immersing ourselves into the Baton Rouge community and being part of everything that’s going on here at LSU.