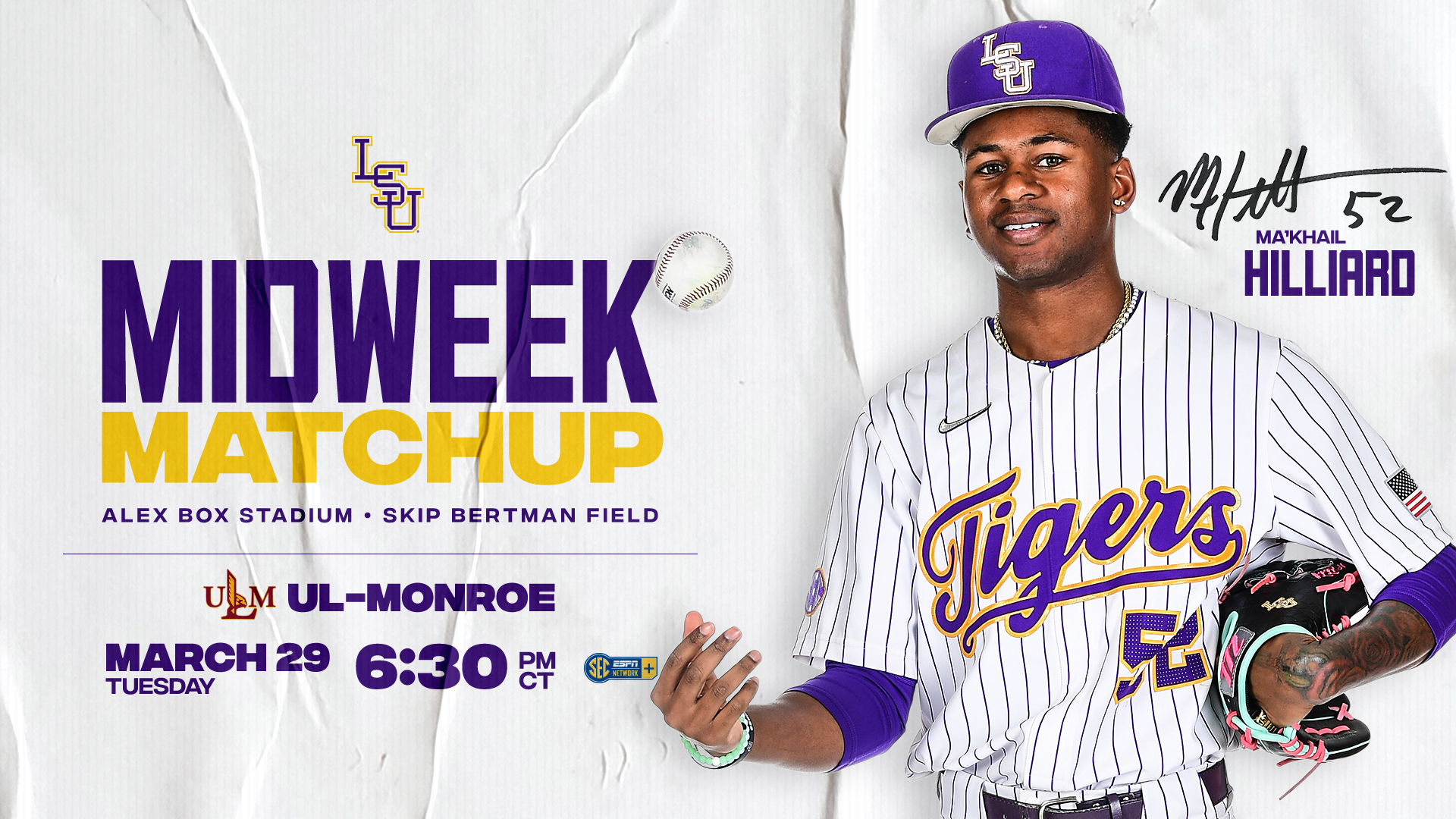 ONLINE
• The game may be viewed live on SEC Network +

LSU SERIES RECORD VS. UL MONROE
LSU leads the all-time series with UL-Monroe, 41-8, including a 5-0 victory over the Warhawks on April 20 of last season in Alex Box Stadium, Skip Bertman Field … LSU and ULM have met just three times over the past 10 seasons, including the game last season … LSU also posted a 12-7 win over the Warhawks in the 2019 season opener (Feb. 15) at Alex Box Stadium, Skip Bertman Field … prior to the 2019 meeting, the teams had last faced one another in the 2012 NCAA Baton Rouge Regional, when LSU recorded a 4-1 victory over the Warhawks at “The Box.”

QUOTING COACH JAY JOHNSON
“Our goal is to get back into the top tier of the SEC, and the only way to it is through it, so to go to Florida and win a couple of games over a great program is very encouraging. In the short term, though, it was just another weekend. There’s another game coming fast, and we have to re-set and be ready for it. We had a very good mindset from our team on Saturday and Sunday – offensively, we were attacking mistakes at the plate; defensively, we played much cleaner, and we were great on the mound all weekend.”

ABOUT THE TIGERS
• LSU posted an SEC series victory over seventh-ranked Florida last weekend, marking the Tigers’ first series win in Gainesville since 2012 … LSU handed Florida its first SEC series loss at home since May 2019 … the Tigers play host to UL Monroe on Tuesday before beginning Week 3 of SEC play at 6 p.m. CT Thursday versus Auburn in Alex Box Stadium, Skip Bertman Field … LSU, which is 3-3 in the SEC, is in a four-way tie for second place in the Western Division, two games behind Arkansas (5-1).
• Designated hitter Brayden Jobert led LSU to a series win at No. 7 Florida by batting .444 (4-for-9) in two games against the Gators with three homers, five runs scored and nine RBI … Jobert’s two-run homer in the fourth inning on Sunday broke a scoreless tie and ignited a four-run LSU outburst … Jobert later highlighted a seven-run sixth inning with a three-run dinger that gave LSU a 10-0 lead in the Tigers’ 11-2 win, as he collected a career-best five RBI in the game … his first homer of the weekend came on Saturday, when his three-run blast was the signature blow of a six-run third inning … Jobert also added an RBI single in the ninth inning of the Tigers’ 16-4 win.
• Freshman right-hander Grant Taylor pitched LSU to a series-clinching win on Sunday over seventh-ranked Florida in Gainesville with the longest outing of his career … Taylor entered the game in the fourth inning in relief of fellow true freshman Samuel Dutton and pitched the rest of the game, limiting the Gators to two run on four hits in 5.1 innings with two walks and a career-best six strikeouts … beginning with the final out of the seventh inning, Taylor retired seven of the eight Florida hitters he faced to end the game … Taylor’s effort helped LSU hand Florida its first SEC series loss at home since May 2019.
• LSU’s 16-4 win over Florida on Saturday marked the Tigers’ second-largest margin of victory in a game played at Gainesville … the largest margin of victory for LSU in Gainesville was 14 runs when the Tigers defeated the Gators, 18-4, on March 1, 1986 … LSU outscored the Gators, 29-13, an outhit Florida, 29-17, in last weekend’s series … the Tigers pounded out 14 extra-base hits in three games, including six doubles and eight home runs.
• Infielder Jordan Thompson batted .417 (5-for-12) in the Florida series with two doubles, four runs and one RBI … Thompson started Games 2 and 3 at second base, switching positions with Cade Doughty, the former second baseman who started at shortstop on Saturday and Sunday … catcher Hayden Travinski hit his first two homers of the season during the series, and centerfielder Dylan Crews homered and collected four RBI … first baseman Tre’ Morgan launched his first homer of the year on Sunday, and he drove in three runs.
• Senior right-hander Ma’Khail Hilliard defeated Florida on Saturday, blanking the Gators through the first five innings of his outing … Hilliard worked 5.2 innings, limiting Florida to four runs on five hits with no walks and seven strikeouts … freshman right-hander Samuel Dutton made his first career collegiate start on Sunday and shut out Florida in a 3.2-inning outing, allowing just one hit with three walks and one strikeout … the LSU pitching staff limited Florida to a .183 team batting average over the weekend, allowing just 17 hits in 93 at-bats.

ABOUT THE WARHAWKS
• UL Monroe posted a 2-1 Sun Belt series victory over Georgia State last weekend in Monroe … the Warhawks are hitting .262 on the year with 21 homers and 32 steals in 45 attempts … ULM has a 5.69 team ERA, and its staff has recorded 158 strikeouts in 193 innings.
• The Warhawks are led at the plate by infielder Colby Deaville, who is hitting .364 with four doubles, three homers and nine RBI … outfielder Mason Holt and infielder Landon Cato have each recorded four homers and 12 RBI this season.