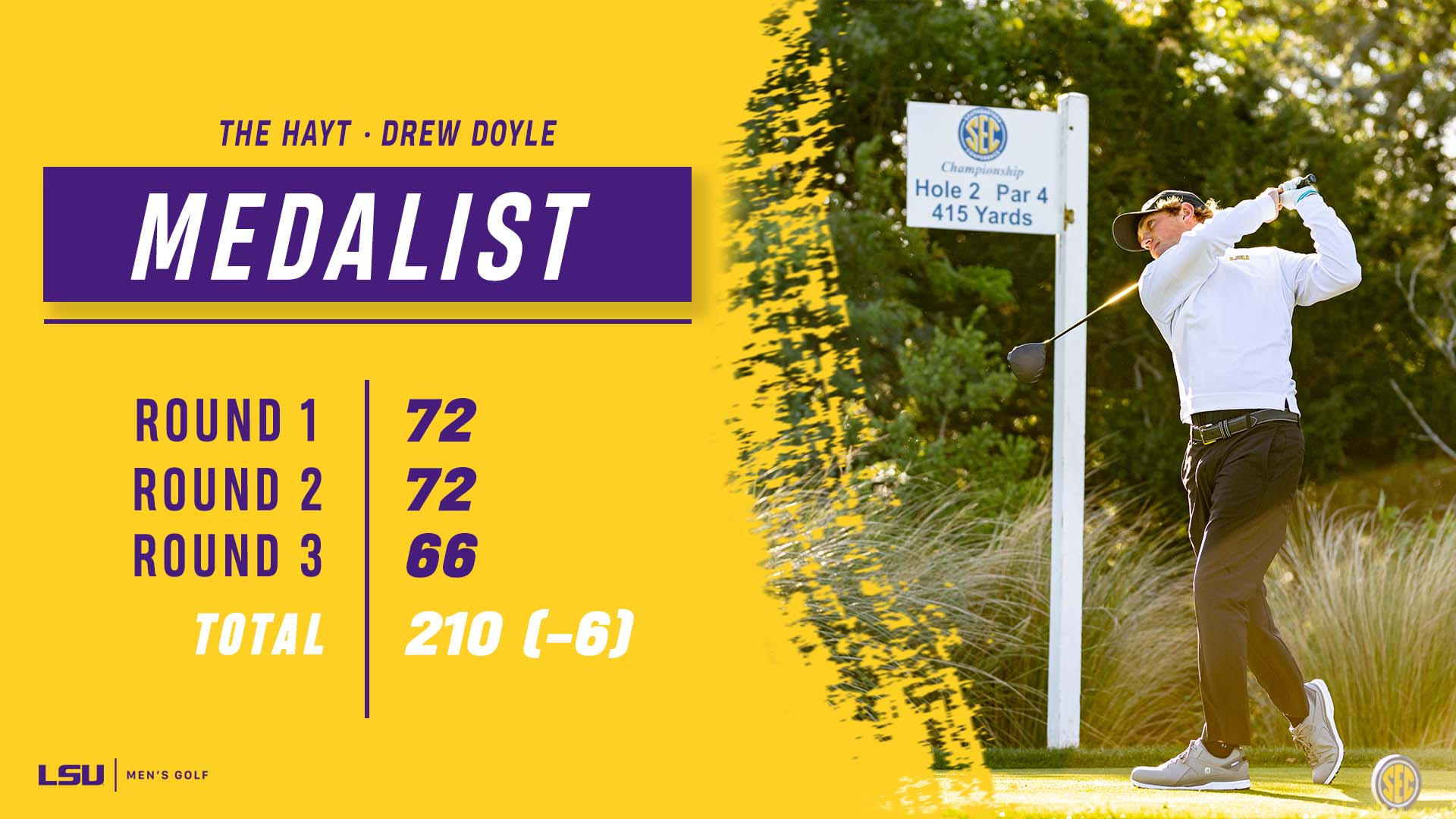 Ponte Vedra Beach, Fla. – LSU men’s golf sophomore Drew Doyle secured the first medalist honor of his collegiate career after a field-best 6-under 66 third round on Monday took him to a share of first place with a 6-under 210 score in the tournament. The No. 25 LSU men’s golf team finished in 7th place in the field of 15 teams at The Hayt after shooting an 18-over 882 (298, 296, 288).

Doyle entered the final round five shots behind the leader and had the perfect start as he holed-out an eagle on the par 4 10th hole to give him some momentum to start the day. He followed that eagle with a sequence of birdie-par-birdie on holes 11, 12, and 13 to continue the hot start before bogeys on 14 and 15 slowed his roll. He recovered from the bump with a birdie at 18 to finish his first nine at 3-under 33. Doyle played a steady final nine holes, grabbing a birdie at the 2nd hole before a clutch eagle at the par 5 8th took him to (-6) on the day. Doyle grabbed a par at the 9th hole to finish his round at 6-under 66; It was the lowest round in relation to par of his collegiate career and it earned him a share of the medalist honor with North Florida’s Nick Gabrelcik.

Doyle’s medalist performance was powered by a strong showing on the par 4s with a tournament-low scoring average of 3.87, which accumulated to (-4) for the event. He led the field in eagles with three in the tournament and his 12 birdies were the sixth most of the field. Doyle is the third LSU player to claim medalist honors this season, joining Michael Sanders (Turning Stone) and Nicholas Arcement (San Diego Classic).

Garrett Barber shot the best round of his tournament as he grabbed five birdies enroute to a 2-under 70 that brought his final score to 3-over 219, tied for 17th place on the leaderboard. Nicholas Arcement concluded the tournament with an even par 72 that took his final score to 5-over 221, which placed him tied for 30th place.

Cohen Trolio joined his teammate Barber in a tie of 17th position with a 3-over 219 after shooting a 1-over 73 in the final round of action. Michael Sanders carded a 1-over 73 to finish at 10-over 226 and tied for 52nd place while Trey Winstead rounded out the Tigers in action with a 5-over 77 final round score to finish tied for 65th with a 13-over 229.

Up Next
LSU heads to Mississippi for the final tournament of the regular season to participate in Mississippi State’s Mossy Oak Collegiate on Monday, April 11th.