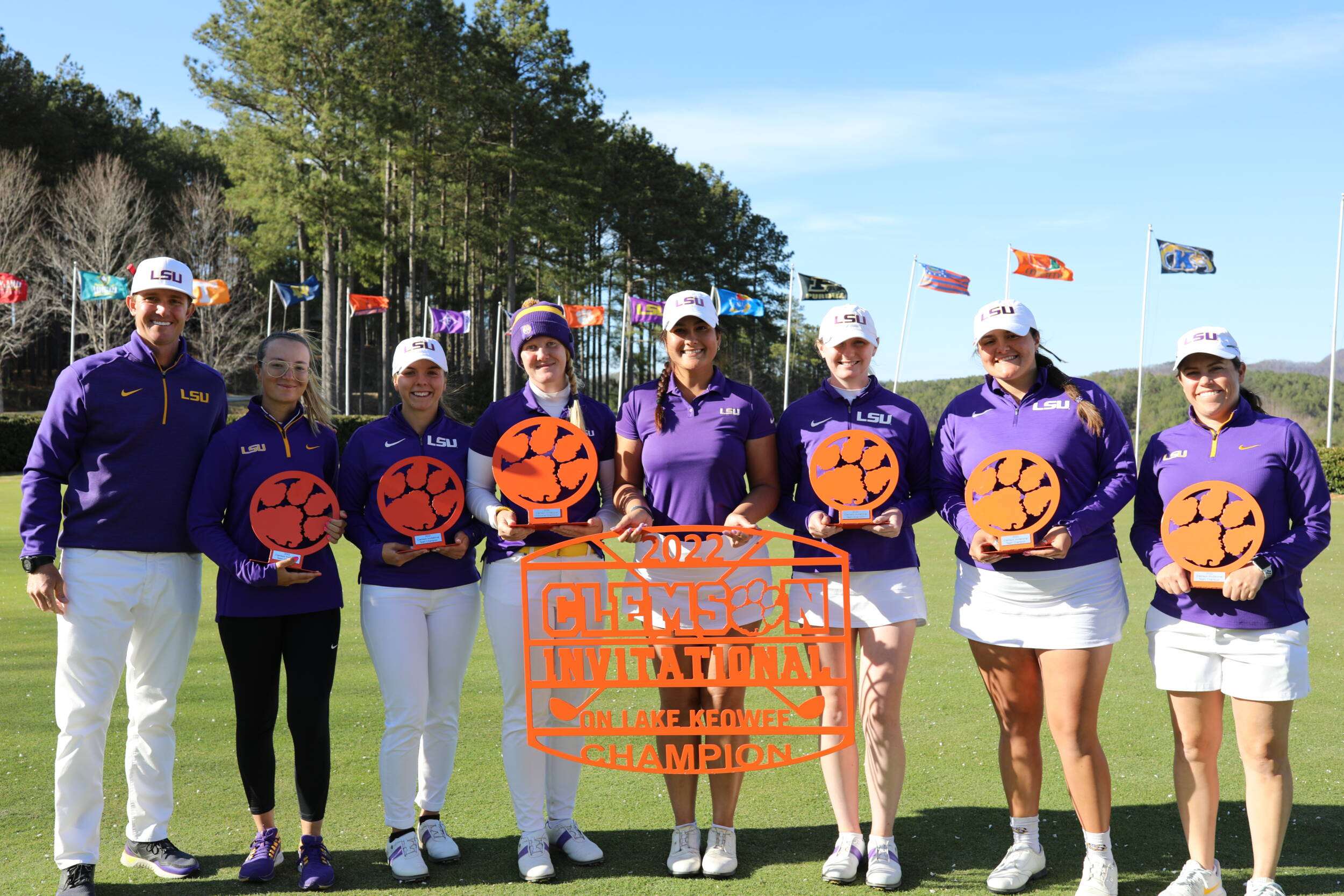 SUNSET, South Carolina – The numbers 47 and eight proved to be special after the LSU women’s golf team concluded its regular season team competition at the Clemson Invitational here Sunday afternoon.

47 – The number of team victories for LSU in its 40-plus-year history as a college program. LSU posted a 4-over par round of 292 on the final day to move from fourth to first and secure the team championship by one shot over Illinois and four shots over Kentucky. For LSU Head Coach Garrett Runion, it was his sixth team championship in his four years as the head of the program.

8 – Ingrid Lindblad posted one of just two under par rounds on the final day of the 54-hole tournament and her 4-under 68 allowed her to move past the competition and score a five-shot victory. The win, the junior’s second straight, gives her eight wins at LSU and she is now the all-time women’s collegiate leader in wins at the school. The tournament win allows her to break a tie with Jenny Lidback, who won seven tournaments in the 1985-86 season. Lindblad tied that mark earlier in the month at the Clover Cup in Mesa, Arizona with Lidback on hand to watch.

“It’s pretty impressive Ingrid breaking Jenny’s record which has stood for a very long time now and that puts her at three wins in the last four events in the spring,” said Coach Runion of the accomplishment.

For LSU, ranked T17 in the Mizuno WGCA Coaches Poll, the Tigers were chasing Kentucky for a good portion of the round as the Wildcats held the 36-hole lead. LSU was playing in the wave in front of Kentucky and moved into position to take the title but Illinois, which entered the day tied for sixth, finished earlier and eventually was tied with the Tigers at 28-over par.

But Lindblad was able to birdie the par 5 17th hole and that proved to be the difference that dropped LSU to a winning +27 891 score at The Reserve at Lake Keowee. Illinois shot the best round of the day at 290, but LSU’s second-best score of 4-over 292 was the difference in getting the trophy.

For Lindblad, the first nine holes were pivotal in the victory as she had nine birdies (three each round) on those holes and a tournament leading 12 birdies. She fired rounds of 74-70-68 for a 4-under 212, five shots clear of Annabell Fuller of Florida at 1-over 217 with Florida’s Marina Escobar Domingo and Brooke Biermann of Michigan State at 2-over 218.

Lindblad played the par four holes in 1-under and the par five holes in 5-under par.

She becomes just the third LSU women’s golfer to win four times in a college season joining Lidback and Kristi Coats (1990-91). Lindblad is the only golfer at LSU, male or female, with eight individual titles in the last 40 years.

On Monday, Stone and Lindblad will be heading to Augusta, Georgia for the Augusta National Women’s Amateur which begins on Wednesday. It will be Lindblad’s second appearance in the event (finishing T3 last year) and Stone’s first appearance.

LSU also counted a 73 from senior Jessica Bailey and a 76 from Elsa Svensson. LSU showed its depth in the tournament as LSU’s No. 3 golfer, sophomore Carla Tejedo, had to be replaced the night before the start of the tournament with an illness.

“Obviously, this was a very good week for us,” Runion said. “Things started a little unsure with Carla coming down with an illness. We had to fly Presley Baggett up at the last minute and she did not get to play a practice round. But she did a good job going right in there. She had seen the course previously, but there were new greens and they got rid of 56 bunkers so it was actually a new course for everyone.

“It was a nice win,” Runion said. “Everyone contributed during the course of the tournament. The birdies by Ingrid on 17 and Jessica on 18 were very important. The last three holes were into the wind and played very tough.”

Runion noted that it was good for LSU to have a team win both in the fall (Jackson T. Stevens Cup which featured both stroke play and match play) and this weekend’s Clemson Invitational.

Some of the LSU team will take part in a singles competition at Auburn on April 4-5 before the team gets back together for the SEC Championships in Birmingham starting on April 13.