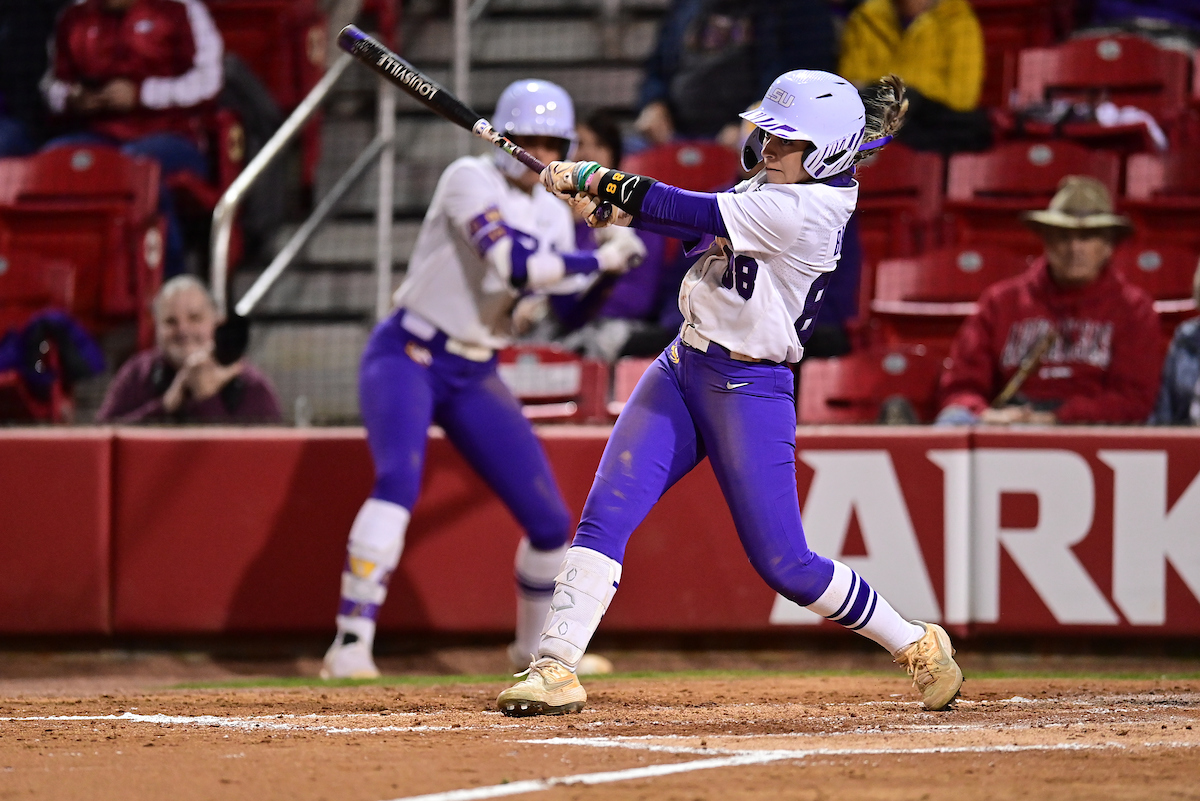 For the second consecutive game, sophomore Taylor Pleasants logged three hits (3-for-4) and had two RBIs thanks to her two-run shot that brought the Tigers within one run in the sixth inning.

Senior Shelbi Sunseri also had three hits on the day (3-for-4) including a home run but was credited with the loss in the circle (5-3) after recording three strikeouts in 5.1 innings. Freshman Raelin Chaffin got the start and registered the first two outs of the game.

Junior Georgia Clark had two RBIs with her dinger in the third inning and sophomore Danieca Coffey also turned in a pair of RBIs. Sophomore Ciara Briggs went 2-for-3 at the dish and scored two runs in the setback.

LSU struck first with a sacrifice fly from Clark to score Briggs who drew a walk in her first at bat. The Razorbacks answered quickly however with a leadoff home run and got a two-out RBI single to make the score 2-1 after the opening inning.

In the second stanza with the first two batters retired, sophomore Cait Calland was hit by a pitch and freshman Sydney Peterson singled before the Tigers scored on RBI single by Coffey. The Razorbacks closed out the inning to stop the momentum and took a 4-2 advantage after scoring two more runs in the bottom half.

LSU scored three runs on two hits, highlighted by back-to-back solo shots from Clark and Sunseri. After a groundout for out No. 2, four consecutive Tigers took base on balls, including an RBI for Coffey that gave LSU a 5-4 lead. Arkansas opened the bottom half of the frame with a double and an RBI single to tie the game 5-5 after three. The Razorbacks held the Tigers scoreless for two consecutive innings and added another two-run frame in the fourth and one run in the fifth to take an 8-5 lead through five.

Briggs led off the sixth inning with a bunt single and Pleasants’ two-run homer to center field brought the Tigers within one run, 8-7. The score remained the same after LSU held Arkansas scoreless for the first time in the game, but unfortunately could not muster any offense in the top of the seventh as they went down in order to end the game.

Game two of the three-game series at Arkansas will continue tomorrow at noon and will be televised on ESPN2.