No. 14 LSU takes on No. 7 Florida this weekend in the Tigers' first trip to Gainesville since 2017. 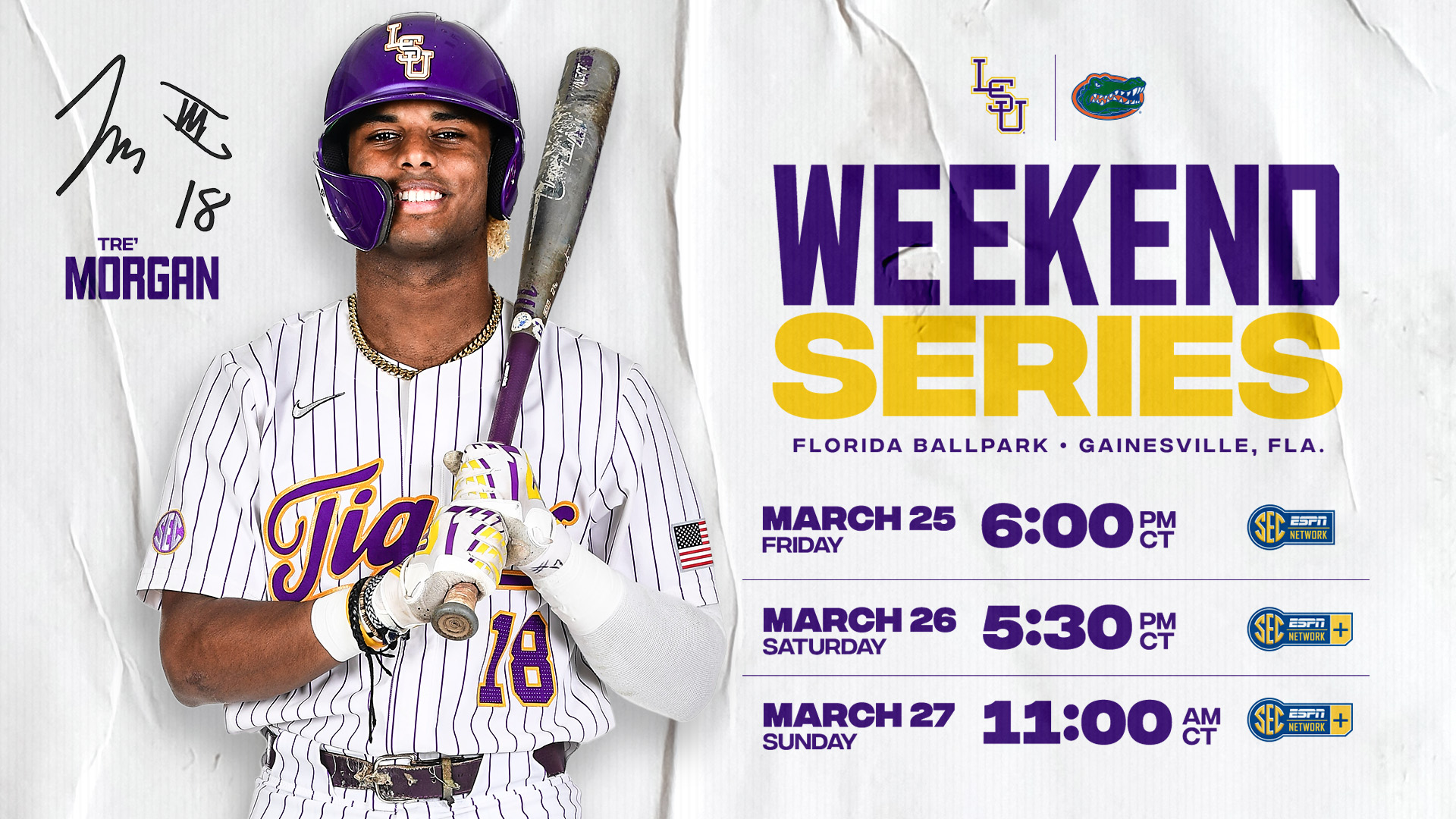 LSU SERIES RECORD VS. FLORIDA
LSU leads the all-time series versus Florida, 64-51-1, as the series began in 1971 … this weekend’s series marks the first meeting between LSU and Florida since April 18-20, 2019, when the Tigers won two of three games over the Gators in Baton Rouge … this weekend also marks LSU’s first visit to Gainesville since 2017, when Florida won two of three games over the Tigers …. Florida has won eight of the 13 meetings between the teams since 2016 … LSU and Florida met in the 2017 College World Series Finals in which UF posted two straight wins over LSU to claim the national championship.

QUOTING COACH JAY JOHNSON
“Florida is one of the top programs in the SEC, so we’re going to do everything in our power to rise to that level, and we’re looking forward to the opportunity this weekend.”

ABOUT THE TIGERS
• LSU began this week with a 7-6, 12-inning loss to Louisiana Tech on Wednesday night in Baton Rouge … the Tigers opened SEC play last weekend, and captured one of three games versus Texas A&M in Alex Box Stadium, Skip Bertman Field.
• LSU’s middle relief trio of Trent Vietmeier, Cale Lansville and Paul Gervase was spectacular on Wednesday night, combining to limit Louisiana Tech to one unearned run on no hits in seven innings with two walks and 13 strikeouts … Louisiana Tech made 36 consecutive plate appearances in the game without recording a hit … LSU finished with a total of 20 strikeouts pitched in game, just four shy of the school-record 24 set in 1959.
• LSU is No. 7 in the SEC in team batting average (.306), and the Tigers are fourth in the league in on-base percentage (.426) … LSU batters have been hit by a pitch a league-best 48 times … the Tigers’ pitching staff is No. 5 in the SEC with a 3.32 ERA.
• LSU catcher Tyler McManus homered in back-to-back games last Friday and Saturday versus Texas A&M, marking his first career LSU dingers.
• Second baseman Cade Doughty was 5-for-10 in the Texas A&M series with one double, three RBI and one run scored.
• Outfielder Dylan Crews was 5-for-14 in the Texas A&M series with one homer, three RBI and four runs scored … Crews provided the game-winning RBI single in the bottom of the eighth inning Sunday that lifted the Tigers to a 7-6 win over the Aggies.
• Sophomore left-hander Riley Cooper earned his first career LSU win on Sunday, as he defeated Texas A&M with 1.2 innings of scoreless relief … he limited the Aggies to one hit with no walks and one strikeout in the Tigers’ 7-6 victory … Cooper appeared in all three games of the Texas A&M series, working 3.1 innings and giving up one earned run on two hits with two walks and two strikeouts.
• Freshman right-hander Grant Taylor enjoyed an impressive SEC debut with four innings of relief work versus Texas A&M on Friday … Taylor allowed no runs on two hits with one walk and one strikeout … another freshman right-hander Samuel Dutton, also pitched effectively against Texas A&M with two appearances in the series .. Dutton worked a total of three innings, allowing just one run on four hits with two walks and four strikeouts.

ABOUT THE GATORS
• Florida is 16-5 this season, and the Gators began this week with a 3-2 win over Bethune-Cookman Tuesday night in Gainesville … Florida opened SEC play last weekend by winning two of three games versus Alabama in Tuscaloosa.
• The Gators are hitting .309 as a team (fifth in the SEC), and Florida has clubbed 43 home runs (second in the SEC) … outfielder Wyatt Langford is batting .385 with three doubles, one triple, eight homers and 23 RBI … outfielder Jud Fabian is batting .320, and the leads the Gators in homers (10) and RBI (25) … outfielder/infielder Sterlin Thompson is hitting .322 with four doubles, one triple, six homers and 19 RBI.
• Florida has a staff ERA of 3.07, which is No. 4 in the SEC … left-hander Hunter Barco, Friday’s starting pitcher, is No. 2 in the SEC in strikeouts (44) and innings pitched (31.1), and he’s No. 4 in the league in opponent batting average (.153).