LSU Falls to Ohio State in Second Round of NCAA Tournament 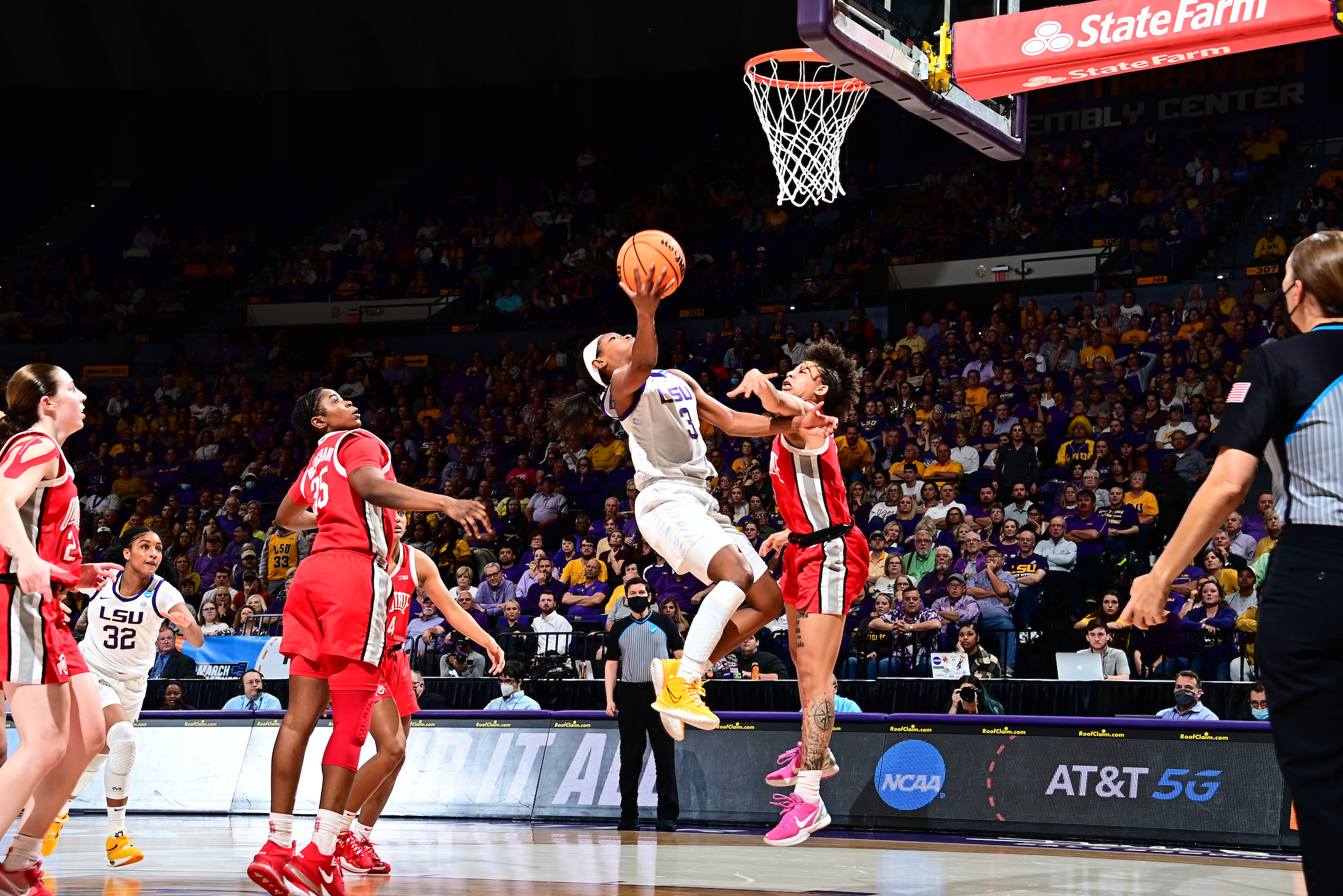 BATON ROUGE – In front of an energetic PMAC crowd Monday evening, LSU’s run in the NCAA Tournament came to an end in the second-round with a 79-64 loss against Ohio State who advanced to the Sweet Sixteen.

The shots just didn’t fall for the Tigers who shot 36.8-percent from the field. Only one other game saw LSU shoot worse from the field. On the flip side, Ohio State shot 48.3- percent and made 10 three-pointers.

It was the end of the road for LSU’s seniors Faustine Aifuwa, Jailin Cherry, Autumn Newby, Khayla Pointer and Awa Trasi. They stayed and helped elevate LSU back to national prominence, teaming up with Hall of Fame Coach Kim Mulkey for her first season in Baton Rouge. LSU won its most games since the 2007-08 season and the Tigers climbed as high as No. 6 in the national rankings.

“One of my most enjoyable years ever in my career,” said Coach Mulkey, who is a finalist for the Naismith Coach of the Year. “I personally judge good coaches based on the talent they have on that floor and are they overachieving? Did we beat some people this year we should not have beaten? You bet we did. We beat a lot of ’em. We beat ranked teams. We didn’t start this baby ranked. We came from nowhere and just built it.”

Pointer’s final game as a Tiger saw her score 32 points, her second highest total of her career. As the only player in LSU men’s or women’s history with at least 1,500 points, 500 rebounds and 500 assists, Pointer will go down as one of the greats. Cherry was the only other Tiger to reach double-figures, scoring 12 during her final outing.

“You know, we have never been here before,” Cherry echoed. “And it was just a blessing to play on this stage and at this level. Yeah, everybody doesn’t make it (to the NCAA Tournament), but we got a chance to make it. And, you know, we did a lot of good things so it’s really nothing negative I can say about it.”

Jacy Sheldon was strong for the Buckeyes scoring a game-high 23 on 9-17 shooting. Taylor Mikesell made four threes and scored 18 while Rebeka Mikulasikova had 12.

The Buckeyes jumped out to an early lead in the first quarter and LSU never totally found its footing. In the second half when LSU needed to go on a run, Ohio State’s poise allowed them to end spurts by the Tigers and keep a safe lead. Even when LSU’s pressure ramped up, the Buckeyes found a way to make shots down the stretch.

After Aifuwa won the opening tip, Pointer hit the first shot of the game, a three from the left wing. LSU missed its next four shots and it wasn’t until the 6:36 until anybody scored again, Ohio State making a pair of free throws. Morris made her first three of the game at the 5:20 mark to give LSU the lead back after Ohio State went up by one. One the next defensive possession, Pointer stripped the ball and scored on the fast break. The Buckeyes scored the next six to take their first lead and go up, 10-8. Sheldon put the Buckeyes up four with a fast break layup after LSU’s seventh turnover of the quarter. Ohio State ended the quarter on an 11-0 run to go up 15-8.

Pointer ended LSU’s scoring drought to begin the second quarter, bringing the Tigers within five, but Ohio State responded with a triple. Mikesell put Ohio State up 21-12 with another three-pointer. Cherry got on the board at the 6:44 mark in the quarter, helping LSU go on a 8-2 run to bring the Tigers within two. Mikulasikova hit a three for the Buckeyes to end the run and put Ohio State up 26-20 going into the media timeout. The Buckeyes went up nine when Rikki Harris joined their three party out of the timeout. Ohio State went into the half with a 34-26 lead after shooting 46.2-percent from three throughout the first two quarters.

Ohio State took its first double-digit lead of the game early in the third quarter, going up 40-26 with the first two baskets of the half and Coach Mulkey took a timeout. Cherry ended the run with a fastbreak layup, looking to gain some momentum for LSU, but the Buckeyes scored on the next possession. Mikesell put the Buckeyes up 47-28 with 5:15 left in the third quarter as LSU struggled to get shots to drop. By the 1:30 mark in the quarter Ohio State’s lead had ballooned to 24. The Buckeyes carried a 20-point lead into the fourth quarter.

LSU’s defensive pressure helped force turnovers to begin the fourth as LSU looked to mount a run, but Ohio State responded every time LSU gained any sort of momentum. Coach Mulkey called a timeout at the 6:49 mark of the quarter after a made layup by Pointer with the Tigers trailing, 62-46. LSU got the ball within 11 with under three minutes remaining, but that was as close as the Tigers would get it.