LSU and Ohio St. Square Off Monday In PMAC For A Spot In the Sweet 16 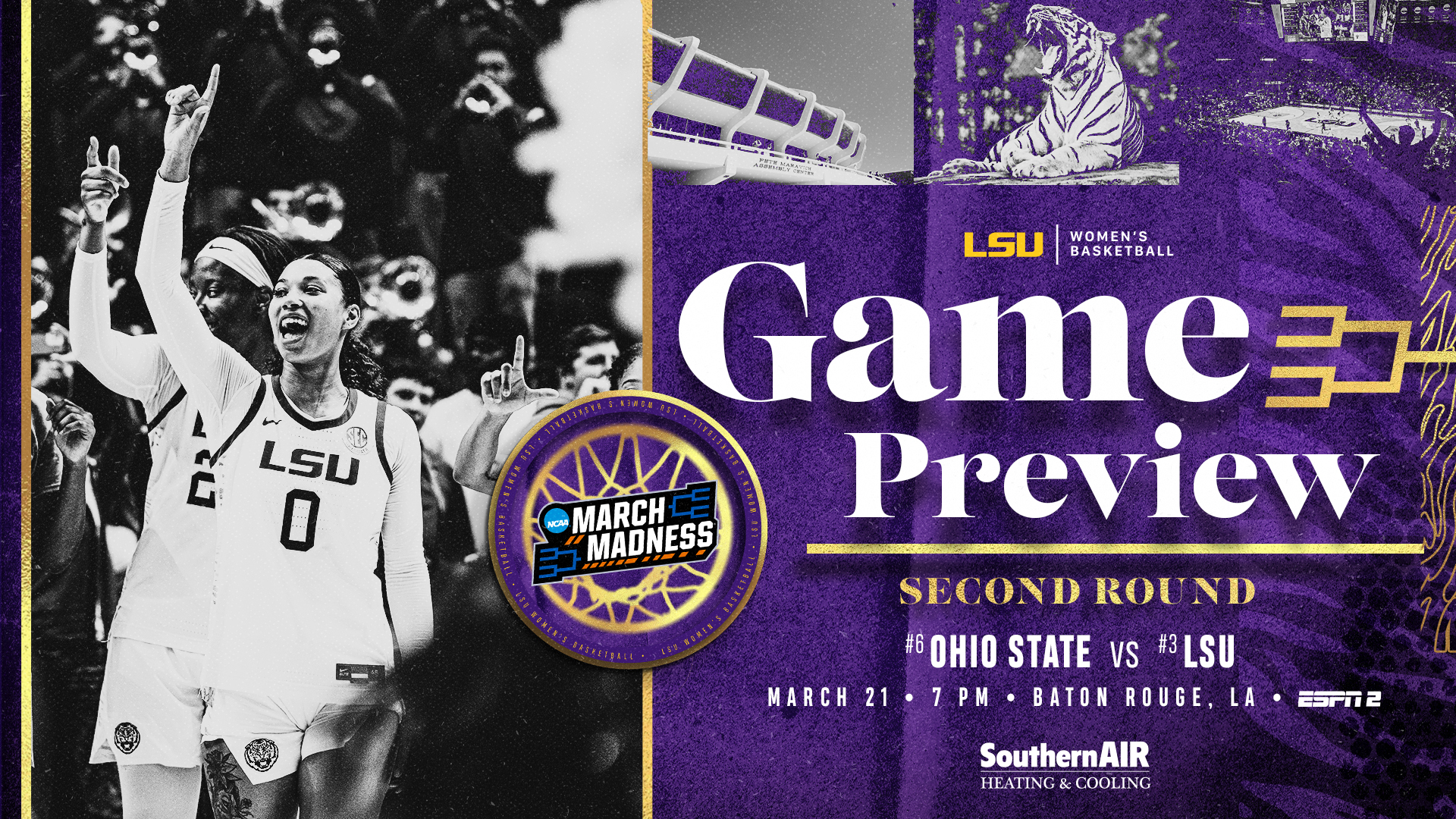 BATON ROUGE – LSU and Ohio State will go to battle Monday in the PMAC at 7 p.m. CT on ESPN2 with a trip to Spokane and a spot in the Sweet Sixteen on the line.

To advance to the Second Round of the NCAA Tournament, both LSU and Ohio State won games on Saturday in Baton Rouge. The Buckeyes defeated Missouri State by seven, 63-56, and the Tigers took down Jackson State, 83-77, after trailing by 10 with less than five minutes remaining in the game.

“It’s just a fun time for sports fans to click on a TV and just see some fun things.” LSU Coach Kim Mulkey said. “You see colleges and cheerleaders and bands and mascots and everybody just enjoying themselves. It doesn’t get any better than March Madness.”

“This team is playing to get to a Sweet Sixteen,” Coach Mulkey said. “Now, think about that for a minute. Where did it start months ago? And here I am still looking at you all. Think about that.”

Brenda VanLengen and Holly Warlick will have the call on ESPN2. Fans can also tune in and listen to Patrick Wright and Shaeeta Williams on the LSU Sports Radio Network, 107.3 FM in Baton Rouge,

In Coach Kim Mulkey’s first season at LSU she has turned the Tigers around. Saturday marked LSU’s first NCAA Tournament victory since 2014, also the last year the Tigers advanced to the Sweet Sixteen. LSU’s 17-point lead in the third quarter Saturday flipped into a JSU 10-point lead with 4:54 left in the game. The Tigers closed the game on a 19-3, clamping down with a full court press and forcing turnovers that led to quick points. With the game tied with under a minute remaining, Pointer swished a three from the left wing, putting LSU in front once and for all.

Cherry put together one of the best games of her career, scoring a career-high 26 points while Faustine Aifuwa played dominant in the paint with 17 points, 14 rebounds and 7 blocks. Alexis Morris saw the court for the first time since spraining her MCL on Feb. 24. She played just over 18 minutes and all eight of her points came from free-throws.

To survive and advance, LSU will go up against an Ohio St. squad that tied for the Big 10 regular season conference title. Jacy Sheldon and Taylor Mikesell both score nearly 20 point per game for the Buckeyes who have the sixth best scoring offense in the nation with 78.6 points per game as a team. Ohio State also features the sixth best three-point shooting offense in the country with an attack the shoot 37.8-percent from beyond the arc.

“It’s a very, very challenging team for us to play,” Coach Mulkey said. “Their 2-2-1 press created a lot of trouble for Missouri State yesterday.”