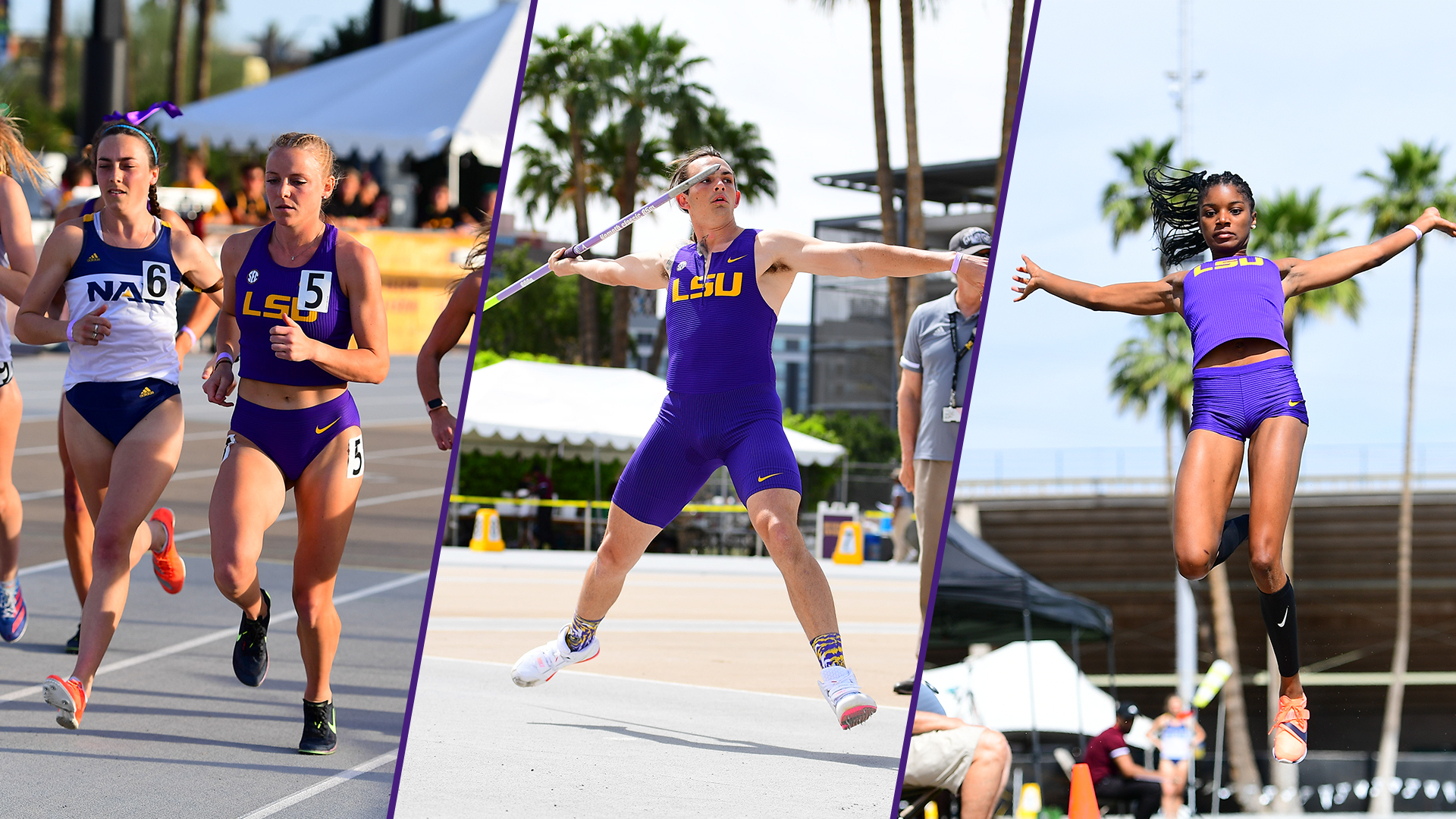 Morgan Smalls and Serena Bolden started the day for LSU with a  one-two finish in the long jump. They both recorded their best marks of the event in the second round. Smalls leaped out to a distance of 19’ 11.75” (6.14 meters) for the win, while Bolden collected mark of 19’ 4.75” (5.91 meters).

Tzuriel Pedigo and Eli Gaughan did just what the jumping duo of Smalls & Bolden did as they took the top two spots in the javelin. Pedigo, the 2021 NCAA champion in the event, unleashed a 240 foot, two inch throw (73.22 meters) on his second try of the day for the win; it’s an early NCAA lead in the event. Gaughan collected a career best heave of 227’ 4” (69.31 meters) on his fourth attempt for the silver; the mark is two inches shy of the No. 10 spot on the all-time LSU list.

Sara Funderburk was the third event winner of the day for the Tigers. She ran the 1,500 meter run in a career best time of 4:25.05 for the victory; it took more than three and a half seconds off her prior career best. Addison Stevenson notched a fifth place showing with a time of 4:28.54.

The women’s 4×100 meter relay of Alia Armstrong, Tionna Beard-Brown, Hannah Douglas, and Favour Ofili took silver in a time of 43.15 in their first outdoor relay of the season, which is a pretty quality time to open the season in. The men’s foursome of Da’Marcus Fleming, Dorian Camel, Kenroy Higgins II, and Ashton Hicks ran a 39.74 to take third in their event.

In the women’s 400 meter dash, Garriel White took second with a time of 53.34 in her first outdoor solo performance for LSU. Freshman Michaela Rose PR’d as well in the event with a readout of 54.14 to garner bronze, and Hannah Carroll took sixth with a career best of 56.56.

Da’Marcus Fleming ran the fastest 100 meter time of his career with a clocking of 10.20 seconds to place third in the event. Hurdler Eric Edwards Jr. clocked a personal best in the event as well with a time of 10.55.

The LSU men’s 4×400 meter relay capped off the meet by running a solid season opening time of 3:05.90 for third place. Dorian Camel went first and was followed by Sean ‘Squirrel’ Burrell and Aaron Smith before Ashton Hicks anchored the stick home.

LSU will return home for a brief amount of time before heading to the Texas Relays (March 24-26) in Austin, Texas.