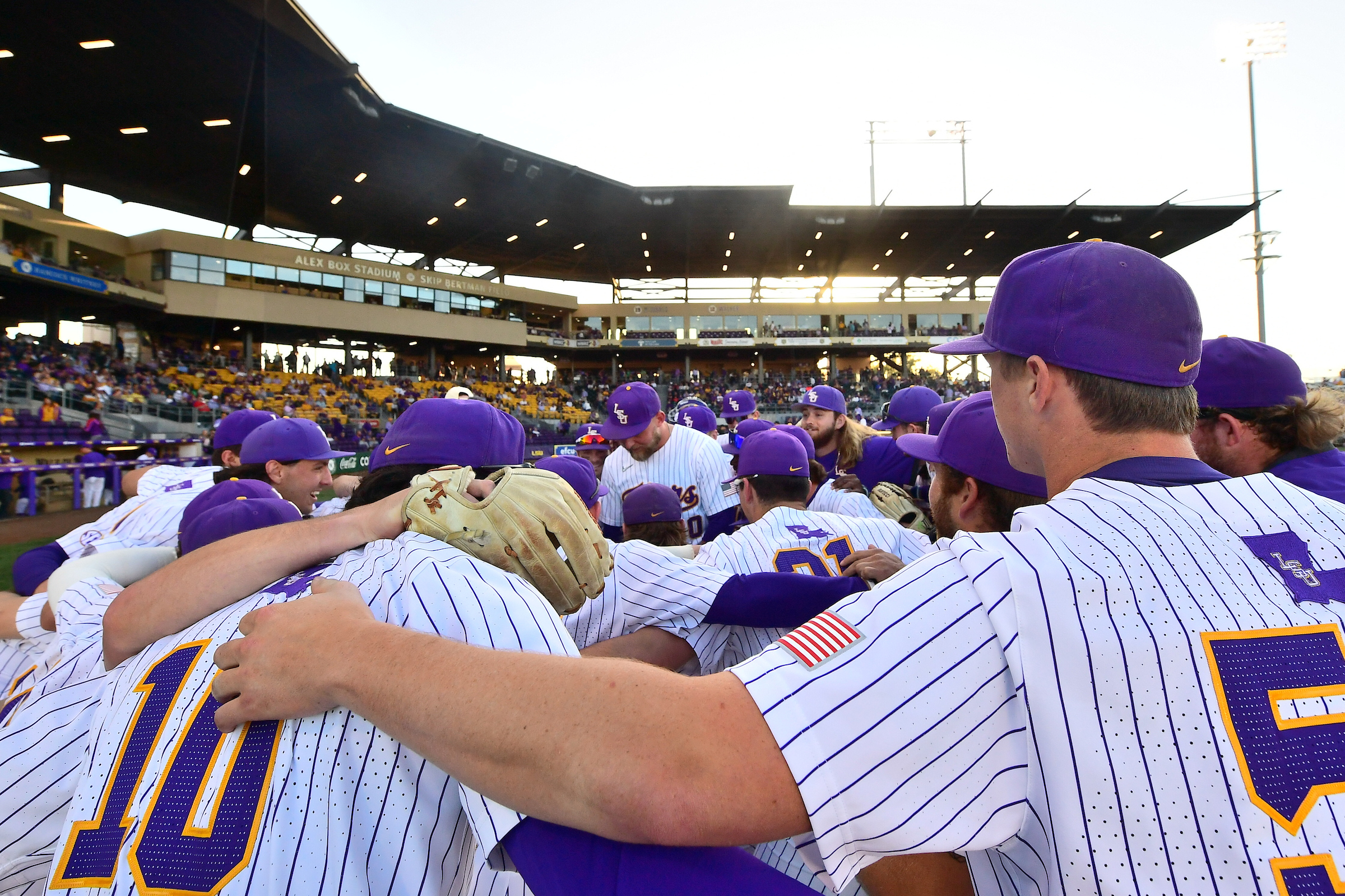 BATON ROUGE, La. – Texas A&M broke a 4-4 tie with two runs in the top of the ninth inning Friday night, and the Aggies went on to defeat fourth-ranked LSU, 6-4, in Alex Box Stadium, Skip Bertman Field.

The teams meet in Game 2 of the series at 6 p.m. CT Saturday in a contest that may be heard on affiliates of the LSU Sports Radio Network and viewed on SEC Network +.

Texas A&M reliever Chris Cortez (3-1) earned the win with 1.2 perfect innings, including two strikeouts. LSU reliever Eric Reyzelman (1-1) was charged with the loss, as he allowed two runs on two hits in 0.2 inning with one walk and one strikeout.

Run-scoring singles by second baseman Austin Bost and by leftfielder Dylan Rock in the top of the ninth provided the winning margin for the Aggies. Cortez retired LSU in order in the bottom of the ninth to secure the victory.

“I thought for six innings we played outstanding defense,” said LSU coach Jay Johnson, “but in the seventh, we had two misplays that led to two runs for Texas A&M. Then, in the eighth, we had a big opportunity with the bases loaded and nobody out, but we only came away with one run. To me, those two innings really stand out and were the difference in the ball game.”

LSU second baseman Cade Doughty got the scoring started in the bottom of the first after slapping an RBI single into right field that scored sophomore centerfielder Dylan Crews from second. Crews had reached on a single up the middle and advanced to second on a groundout.

Texas A&M responded with two solo home runs in the top half of the second against LSU starter Ty Floyd that traveled into the whipping wind blowing from left to right.

LSU regained the lead with by a dinger from sophomore shortstop Jordan Thompson in the fourth and a home run from catcher Tyler McManus in the fifth.

A pair of LSU errors helped the Aggies score two runs in the seventh, giving them a 4-3 lead. In the bottom of the eighth, the Tigers loaded the bases with nobody as Crews singles, third baseman Jacob Berry walked and Doughty was hit by a pitch.

Designated hitter Brayden Jobert came to the plate and delivered an RBI on a fielder’s choice to tie the contest, but the Tigers were unable to score again.

The Tigers’ relief pitching effort was highlight by the outing of freshman right-hander Grant Taylor, who entered the game in the third inning and worked four scoreless innings with two hits and one strikeout.

The Tigers conclude the regular season at Vanderbilt, beginning at 7 p.m. CT Thursday in Game 1 of a three-game SEC series.
Skip To Main Content