No. 3 LSU Opens March Madness Saturday In PMAC vs. No. 13 Jackson St. 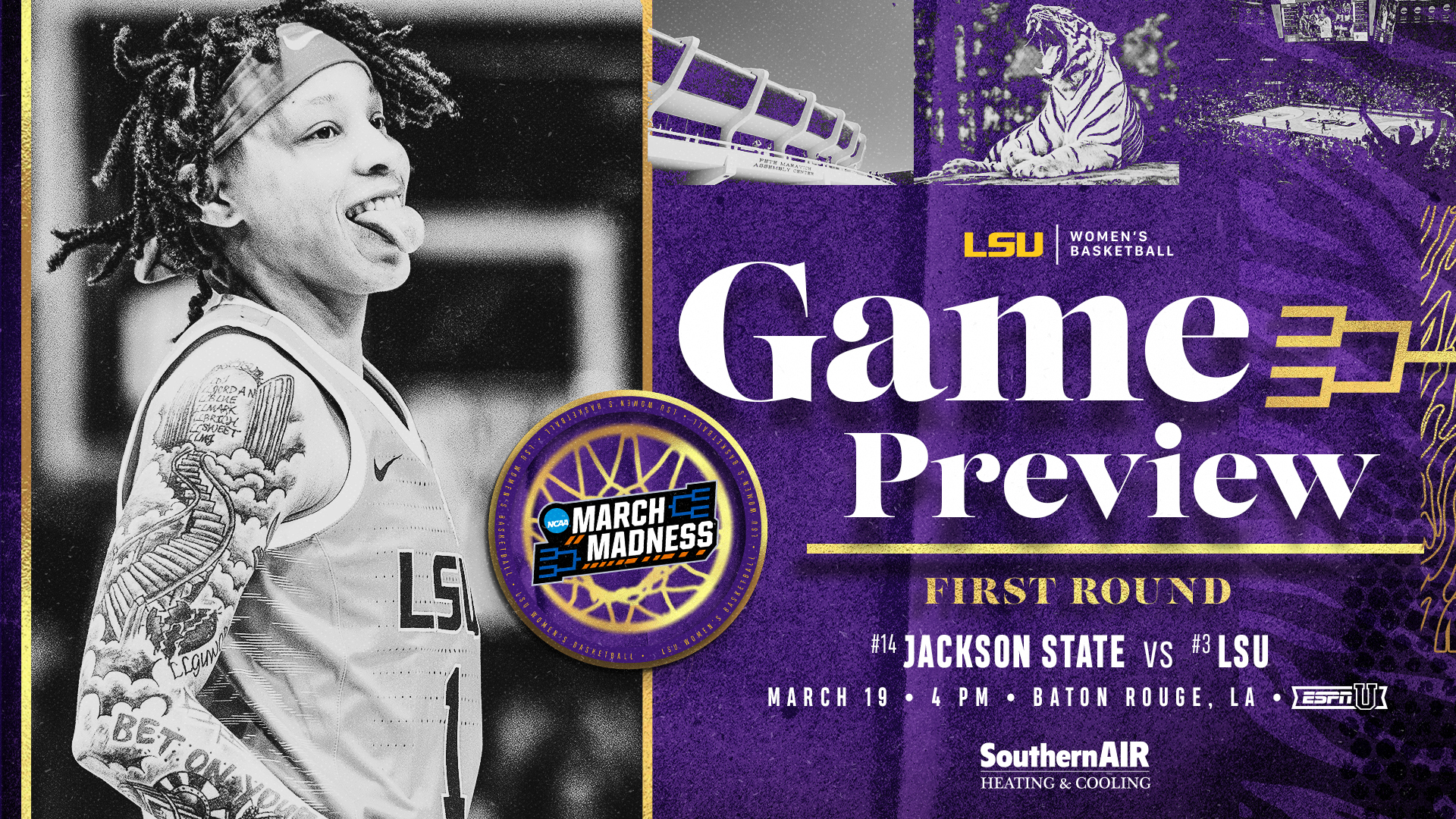 “It’s been an unbelievable — it’s almost a storybook year,” said Coach Mulkey. “And you know, I’ve been involved in 40-0 seasons and expectations and building a program. This is going to rank in there as a season for the record books, in a lot of ways.”

Coverage in Baton Rouge will begin at 1:30 p.m. on ESPNU with No. 6 Ohio State set to square off against No. 11 Missouri State in the PMAC with Brenda VanLengen and Holly Warlick on the call. The LSU game will also air on the LSU Sports Radio Network, 107.3 in Baton Rouge with Patrick Wright and Shaeeta Williams.

Coach Mulkey has led the largest turnaround by a first-year head coach in SEC history. After winning nine games last season, LSU has become national relevant once again and is set to host NCAA Tournament games at home for the first time since 2014. The Tigers are entering the NCAA Tournament with their best seeding since 2007-08, the last time LSU made a run to the Final Four.

Throughout the season LSU has stayed even keeled, never getting too high following success or too low following losses. After finished No. 2 in the SEC during the regular season in one of th e toughest conferences in the country, LSU is ready for what March Madness has in store.

“There’s nothing I can tell them that would prepare them any more than what they’ve already experienced by playing in the SEC,” Coach Mulkey said.

LSU’s success is fueled by its veteran group of starters that average over 22 years of age. Khayla Pointer has led the Tigers as an All-American on pace to set new career-high averages of 19.0 points, 6.5 rebounds and 5.2 assist per game. Pointer and Alexis Morris (15.8 ppg) are the only players from the same team to both rank inside the top-10 of the SEC in scoring.

After spraining her MCL in the first quarter against Alabama on Feb. 24, Morris made her return to practice on Thursday and was back on the court Friday. With Morris out, Ryann Payne played quality minutes in the backcourt of LSU.

Jailin Cherry, like Pointer, has had her best season as a Tiger with 9.1 points, 5.3 rebounds and 2.6 assists per game. When Cherry, Morris and Pointer are on the court together they play as one of the best guard trios in the country and Payne is able to seamlessly transition in for all three.

Faustine Aifuwa has provided an offensive and defensive presence for the Tigers, shooting 52.9-percent from the field, rebounding the ball and blocking shots. Autumn Newby has been a relentless rebounder that grabs 8.1 board per game to lead the Tigers. LSU has a +8.94 rebounding margin that ranks No. 13 in the country and the Tigers grab 39.73 defensive rebounds per game to rank No. 9 in the nation.

LSU’s opponent is coming to Baton Rouge hot through having not lost since December 20. Jackson State has won 21 games in a row, sweeping through the SWAC with the conference’s best offense and defense. The Lady Tigers score 79.6 points per game which ranks No. 4 in the country and on defense they limit opponents to 34.8-percent shooting which ranks No. 7 in the country. Coach Tomekia Reed was named SWAC Coach of the Year for her team’s performance.

Ameshya Williams-Holliday was named the SWAC Player and Defensive Player of the Year and Dayzsha Rogan was named to the All-SWAC First Team. Williams-Holliday led the conference in scoring (19.4 ppg), field goal percentage (58.6%), and blocks (2.7 bpg) and she ranked 2nd in rebounds (11.3 rpg). Playing in the post, Williams-Holliday recorded 19 double-doubles on the season while scoring in double figures in every game. Rogan scored 13.3 as a guard.