Tigers Open SEC Play vs. Texas A&M at "The Box" 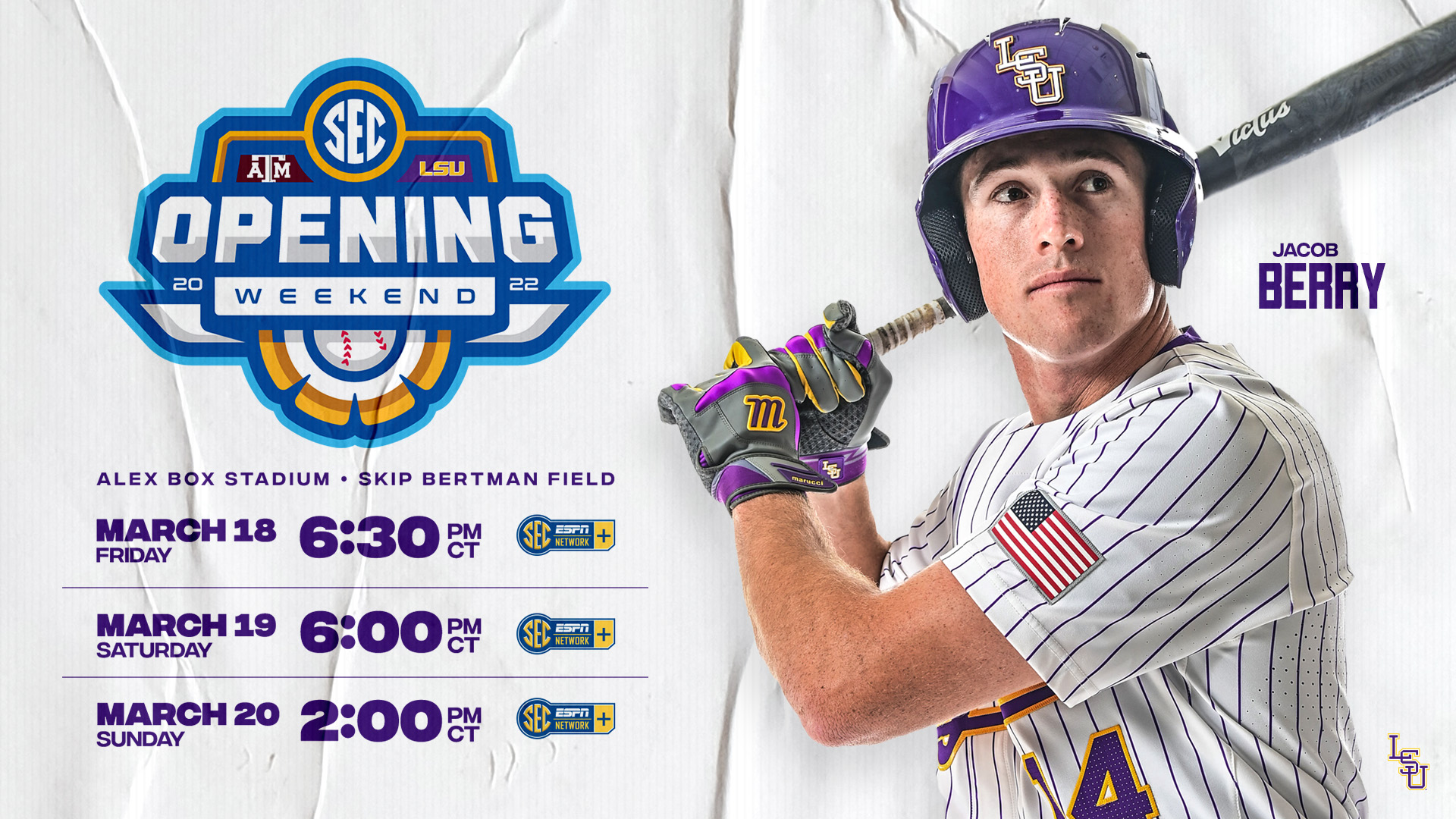 • Prior to 2013, the most recent meeting between the teams came in the 2004 NCAA Super Regional in Baton Rouge, as LSU swept two games to advance to the College World Series … one of LSU’s most famous matchups with Texas A&M came 33 years ago in May, 1989, when the Tigers defeated the top-ranked Aggies twice on the final day of the NCAA Central Regional in Bryan-College Station to advance to the College World Series.

QUOTING COACH JAY JOHNSON
“We’re looking forward to the start of SEC play, but we know the things that we have done to be successful to this point are the same things we need to do moving forward. So in that regard, our approach doesn’t change very much. Texas A&M’s pitchers have thrown a lot of strikes and have not given up a lot of free passes. They have a very athletic group of position players, and they’re aggressive with their running game. They have a talented roster, and we’re looking forward to the challenge.”

ABOUT THE TIGERS
• LSU won has won five straight games, including a midweek victory over Tulane on Tuesday night … the Tigers are 13-0 this season in Alex Box Stadium, Skip Bertman Field … LSU is No. 5 in the SEC in team batting average (.319) and No. 6 in the league in team ERA (2.92) … LSU concludes its nine-game homestand next Tuesday as the Tigers play host to Louisiana Tech at “The Box.”
• Sophomore rightfielder/third baseman Jacob Berry was named a Collegiate Baseball newspaper National Player of the Week Monday after he led LSU to four wins in four games last week … Berry batted .500 (9-for-18) in four games with one double, three homers, seven RBI and seven runs … he homered in each of the first three games of the week, increasing his streak to four straight games with a homer that began on March 6 versus Baylor …. in the Tigers’ three-game series sweep of Bethune-Cookman, Berry was 7-for-13 (.538) with two homers, four RBI and six runs scored … he is hitting .382 on the year with four doubles, an SEC-best eight homers and 21 RBI.
• Senior right-hander Ma’Khail Hilliard defeated Bethune-Cookman last Sunday, working six shutout innings and allowing just two singles with no walks and six strikeouts … Hilliard fired 4.2 perfect innings to begin his outing before allowing a fifth-inning single … he fired 78 pitches in the outing, 59 for strikes, and only one Bethune-Cookman runner advanced beyond first base.
• LSU is batting .317 as a team during its five-game win streak with 14 doubles, nine homers, 53 total hits and 41 runs scored … infielder/outfielder Jacob Berry is hitting .409 (9-for-22) during the win streak with one double, three homers, seven RBI and seven runs … centerfielder Dylan Crews is batting .350 (7-for-20) in the last five games with one double, two homers, six RBI and five runs … second baseman Cade Doughty is batting .333 (5-for-15) during the win streak with two doubles, two homers, six RBI and seven runs.
• Sophomore right-hander Ty Floyd allowed just one unearned run on two hits in a career-long six innings in last Saturday’s 5-1 win over Bethune-Cookman … Floyd recorded two walks, and he tied his career high with eight strikeouts … redshirt sophomore reliever Eric Reyzelman earned his first save of the season last Saturday by working the final three innings in relief of Floyd, allowing only two hits with no walks and seven strikeouts … graduate reliever Devin Fontenot earned his first win of the season last Friday versus Bethune-Cookman, as he fired 2.1 scoreless and hitless innings with no walks and three strikeouts.
• Eric Reyzelman has pitched 5.1 scoreless innings in his last two appearances, earning a win and a save … he has allowed just two hits in those 5.1 innings with one walk and 13 strikeouts … Reyzelman struck out six of the eight Tulane batters he faced in 2.1 innings on Tuesday night … Devin Fontenot has worked 4.0 scoreless relief innings in his last two relief appearances, earning a win and a save … he has allowed only one hit in those 4.0 innings with one walk and four strikeouts.

ABOUT THE AGGIES
• Texas A&M is 10-6 this season; the Aggies dropped an 8-2 decision to Houston on Tuesday night … Texas A&M is No. 14 in the SEC in batting average (.261) and No. 10 in the league in team ERA (3.54).
• The Aggies are lead at the plate by infielder/outfielder Jack Moss, who is hitting .396 with two doubles and nine RBI … outfielder Brett Minnich is hitting .321 with two homers and 15 RBI, and catcher Troy Claunch has six doubles and eight RBI.
• The Aggies pitching staff is allowing just a .233 opponent batting average … one of Texas A&M’s projected weekend starters, left-hander Ryan Prager, has a 1.35 ERA and is limiting opponents to a .136 batting average.