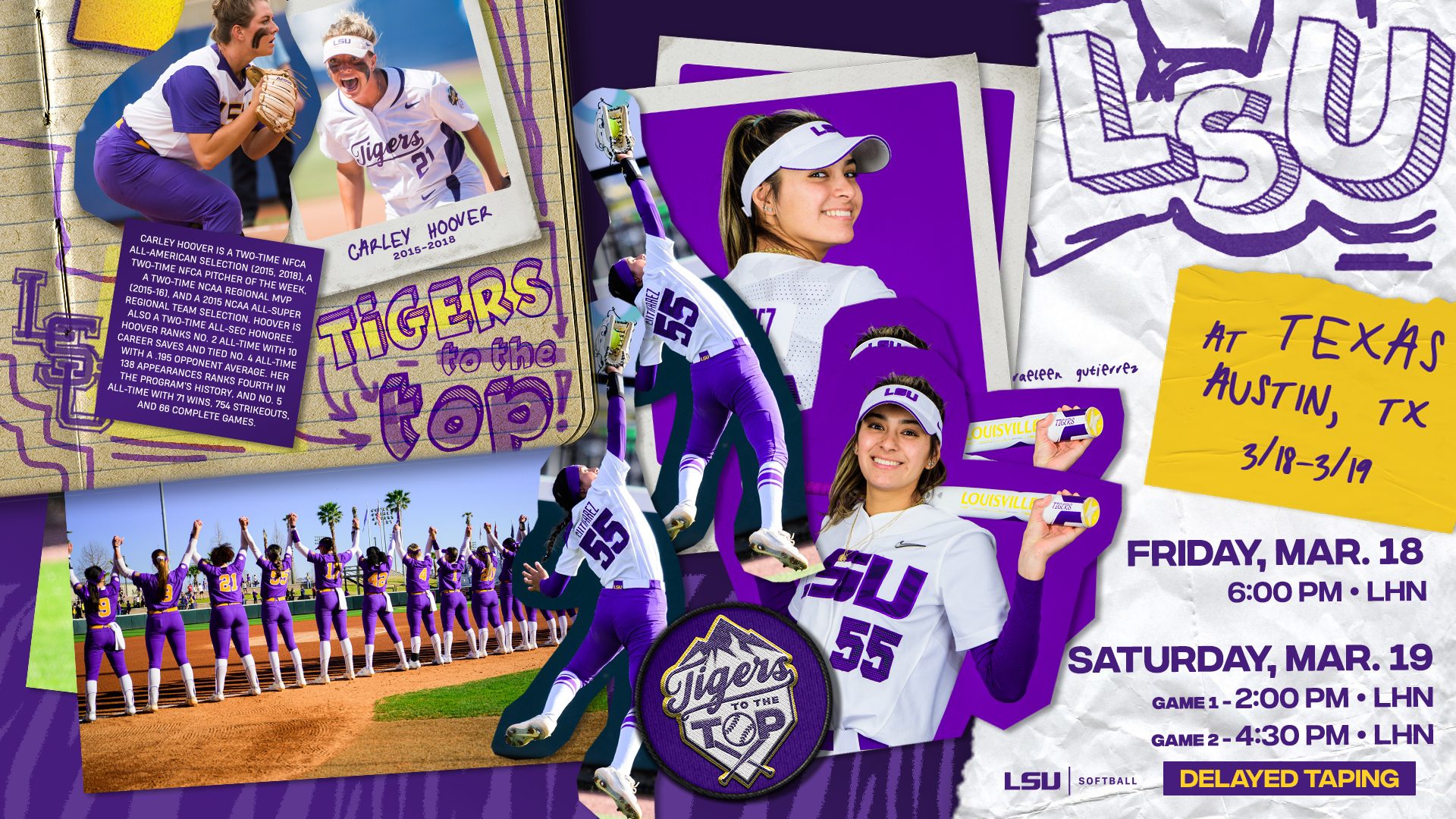 Jeff Palermo will call the action on the LSU Sports Radio Network. All three games can be heard in the Baton Rouge area beginning with Friday’s 6 p.m. contest on 107.3 FM. Saturday’s 2 and 4:30 p.m. games can be heard on 100.7 FM. All three games of the LSU-Texas series will be broadcast on a tape-delay basis on the Longhorn Network with Alex Lobe and Cat Osterman on the call. Friday’s game is estimated to air at 9:30 p.m., followed by 5:30 and 7:30 p.m. on Saturday.

The Tigers dominated Southeastern Louisiana 11-2 in five innings I their first midweek game this season after a solid 2-1 series win over then-No. 2 Alabama to open SEC play. This season, LSU is hitting .296 with 29 home runs and a league-leading 107 walks. Defensively, the Tigers have the third lowest opposing batting average in the SEC at .192 and the fourth lowest ERA at 1.88.

Sophomore Danieca Coffey ranks No. 2 in the NCAA with 39 hits this season and leads the Tigers with a .453 batting average. Coffey is currently on a nine-game hitting streak and 25-game reached base streak to go along with eight stolen bases. Sophomore Ciara Briggs follows with a .402 batting average with 35 hits and seven stolen bags, while leading the club with 26 runs scored. Junior Georgia Clark (.297 avg.) leads the SEC and ranks No. 4 in the NCAA with 34 RBIs and is the team leader with nine home runs (T-No. 5 in SEC).

Junior Ali Kilponen is 9-3 in the circle this season in 71.1 innings pitched. Kilponen has a 1.47 ERA with three shutouts and ranks No. 7 in the conference with 63 strikeouts. Senior utility player Shelbi Sunseri is 5-1 on the rubber with a 1.59 ERA, and at the plate, she has eight home runs to go along with her .291 batting average. The SEC Freshman of the Week Raelin Chaffin (4-0) has a 2.28 ERA with 32 strikeouts and just seven walks in 27.2 innings. Chaffin was one batter shy of a perfect game against No. 2 Alabama (March 12), retiring 17 consecutive batters in the 5-1 victory to earn her first SEC weekly accolade.

The Tigers and Longhorns have split 10 games evenly in the all-time series. LSU is 3-2 against Texas under Coach Torina after winning two out of three in Baton Rouge last season. The two clubs met for the first time on Feb. 18, 2000, where LSU pulled off a 6-2 victory in eight innings.

The Longhorns have won seven of their last eight games with the other game resulting in a 10-10 tie against Minnesota on March 13. They are coming off a pair of wins at UL-Lafayette, 10-2 and 3-2 Wednesday night. Texas is hitting .308 led by freshman Mia Scott’s .394 average behind 28 hits, 24 runs, and 13 stolen bases. Senior Mary Iakopo (.299) leads the team with 20 RBIs and five home runs, bringing power to the lineup.

The Tigers will have another midweek game at 6 p.m. CT Tuesday, March 22 when they host Nicholls State at Tiger Park.