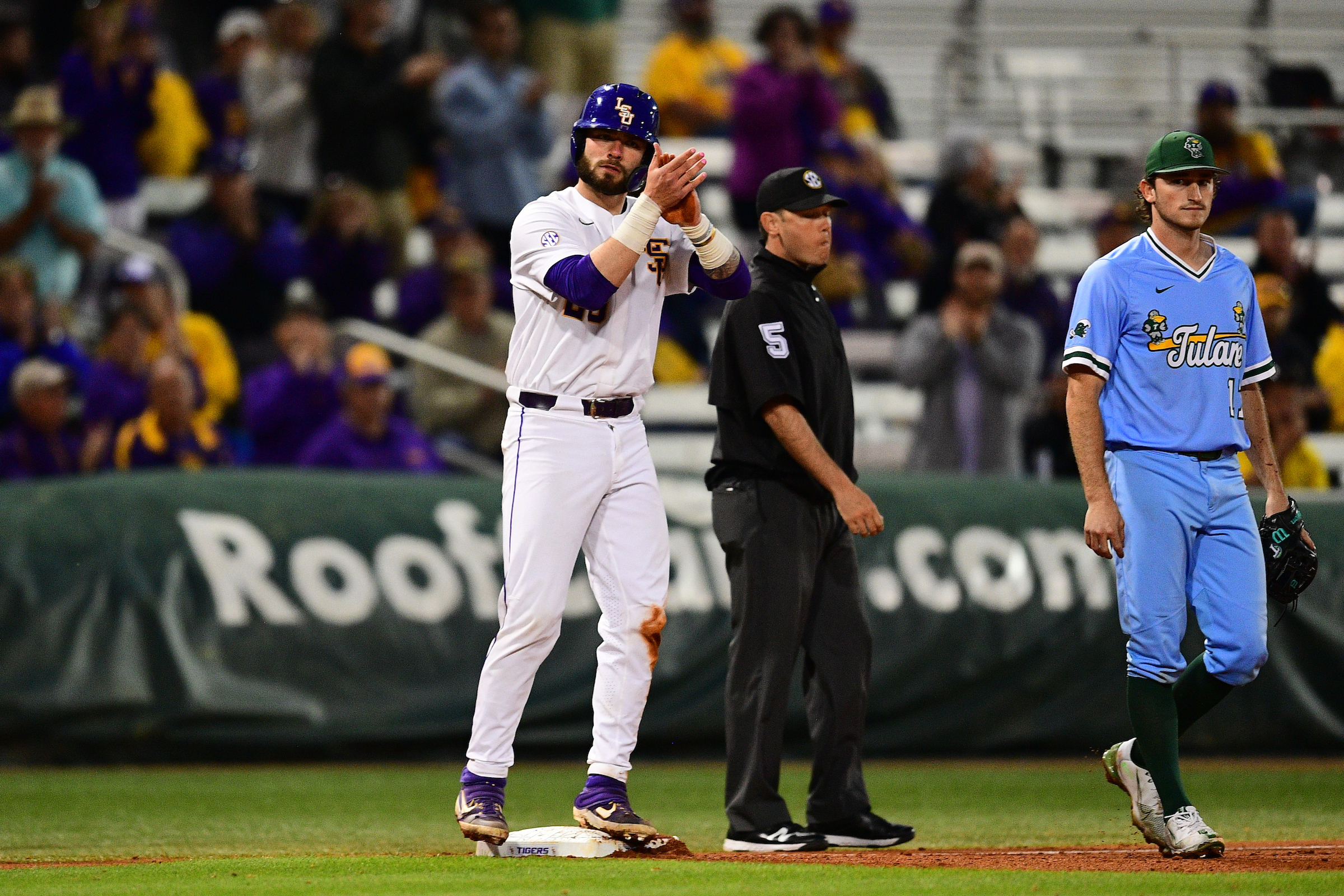 BATON ROUGE, La. – Right-hander Eric Reyzelman struck out six of the eight batters he faced to earn his first career LSU win, and the fourth-ranked Tigers overcame an early 2-0 deficit to post a 7-5 win over Tulane in Alex Box Stadium, Skip Bertman Field.

LSU won its fifth straight game and improved to 14-3 on the year, while Tulane dropped to 10-7.

The Tigers open Southeastern Conference play at 6:30 p.m. Friday when they play host to Texas A&M in Alex Box Stadium, Skip Bertman Field. The game will be broadcast on the LSU Sports Radio Network, and it may be viewed on SEC Network +.

Reyzelman (1-0), the third of seven LSU pitchers, entered the game in the fourth inning and pitched brilliantly, allowing no hits and one walk with six strikeouts in 2.1 shutout innings.

Reliever Devin Fontenot pitched the final 1.2 innings to earn his first save of the year, limiting the Green Wave to one hit with one walk and one strikeout.

“The fans got their money’s worth tonight,” said LSU coach Jay Johnson. “That was not a surprise, Tulane is a very well-coached team that presents some different problems for the teams they face. Tulane has always been a real challenge on LSU’s schedule over the years, so I’m very glad we were able to come out on top.”

LSU first baseman Tre’ Morgan collected two hits and three RBI, and rightfielder Giovanni DiGiacomo turned in the defensive play of the game when he threw out the potential tying run out at the plate after catching a fly ball in the top of the eighth inning.

The Tigers held a 6-5 lead heading into the bottom of the eighth and secured an insurance run on an RBI double by pinch hitter Josh Pearson.

Tulane starter Carter Robinson (1-2) was charged with the loss as he allowed five runs – three earned – on four hits in 3.2 innings with three walks and three strikeouts.

Reyzelman, who transferred to LSU last summer from the University of San Francisco, needed only 33 pitches to record seven outs; he walked the first batter he faced, but then struck out six of the next seven Tulane hitters.

“I’m so proud of Eric; he’s had to face a lot of adversity coming off Tommy John surgery (at San Francisco),” Johnson said. “He’s gotten himself prepared and healthy, and he’s a very big asset for our team when he’s on the mound.”

The Tigers conclude the regular season at Vanderbilt, beginning at 7 p.m. CT Thursday in Game 1 of a three-game SEC series.
Skip To Main Content