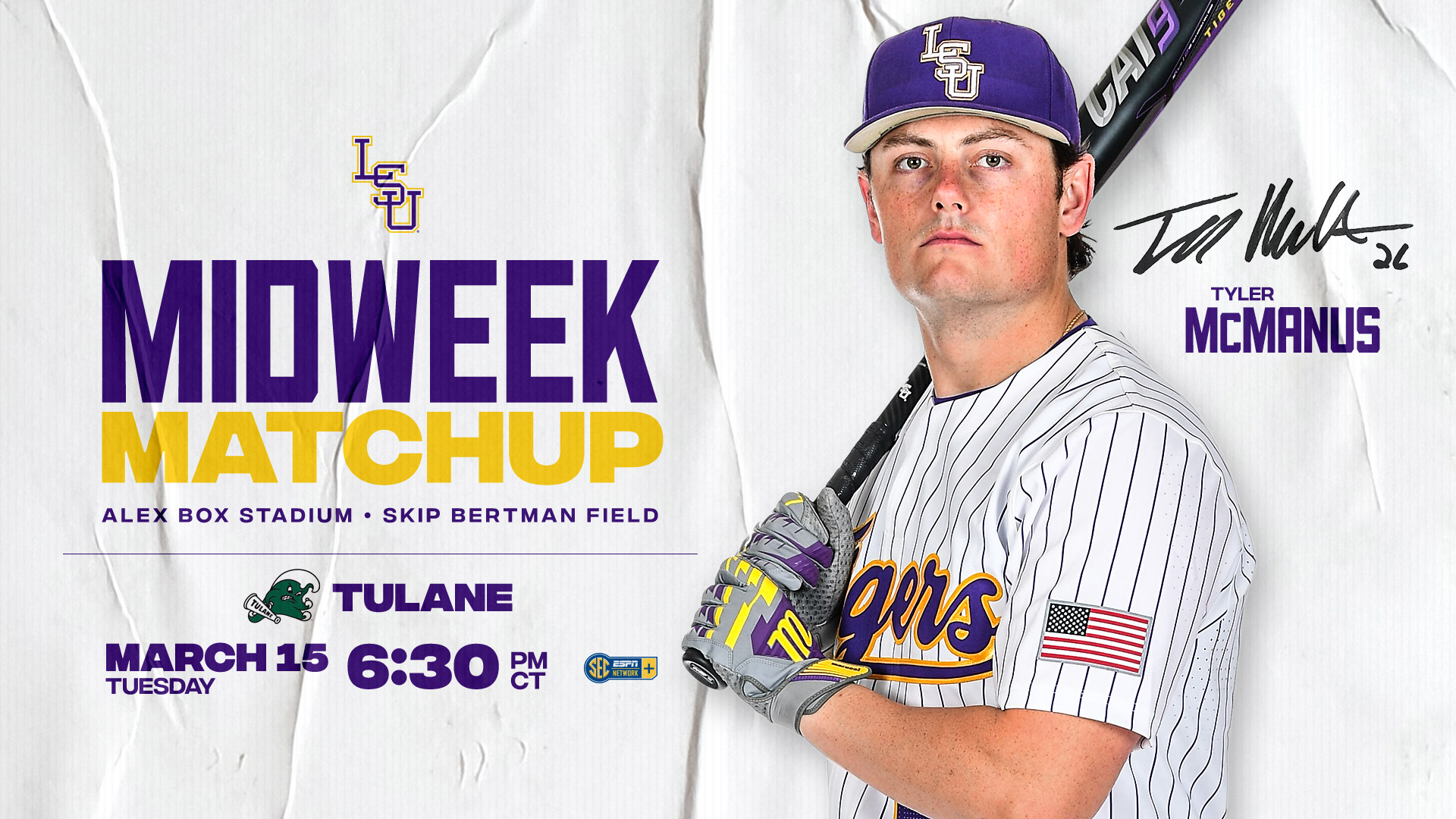 TV/ONLINE
• The game may be viewed live on SEC Network +

LSU SERIES RECORD VS. TULANE
Tuesday night’s game in Baton Rouge will mark the first meeting between the teams since April 18, 2018, when Tulane posted a 10-9 win over LSU in New Orleans … LSU leads Tulane, 181-131-3, in a series that began with the first intercollegiate athletic event in LSU history, a 10-8 victory for the Tiger baseball squad over Tulane in 1893 … LSU won nine of 10 meetings with the Green Wave from 2011-15, but Tulane has won five of the last six games in the series … LSU ended Tulane’s four-game win streak in the series on March 21, 2018, with a 10-4 victory over the Green Wave in Baton Rouge, but Tulane defeated the Tigers later in the 2018 season with the aforementioned 10-9 win on April 18 in New Orleans.

QUOTING COACH JAY JOHNSON
“After the (March 6) Baylor game, our players made a commitment to be better; there wasn’t an emotional response to the loss, but they wanted to play better. There are some clear things that we need to do better, and that weekend (March 4-6) showed us what we needed to focus upon. We have highly competitive, prideful guys, and I think that showed in the way we played on the defensive side of the ball this past week (March 9-13). We’ll continue to work on that; we made a couple of small tweaks to how we were doing things, and I expect that we will continue to improve defensively.”

ABOUT THE TIGERS
• LSU won all four of its games last week, including a midweek victory over McNeese and a three-game weekend sweep of Bethune-Cookman … the Tigers are 12-0 this season in Alex Box Stadium, Skip Bertman Field … LSU continues its nine-game homestand this week as the Tigers play host to Tulane on Tuesday before opening Southeastern Conference play at home this weekend versus Texas A&M … the homestand concludes next Tuesday, March 22, when LSU faces Louisiana Tech at “The Box.”
• Sophomore rightfielder/third baseman Jacob Berry was named a Collegiate Baseball newspaper National Player of the Week Monday after he led LSU to four wins in four games last week … Berry batted .500 (9-for-18) in four games with one double, three homers, seven RBI and seven runs … he homered in each of the first three games of the week, increasing his streak to four straight games with a homer that began on March 6 versus Baylor …. in the Tigers’ three-game series sweep of Bethune-Cookman, Berry was 7-for-13 (.538) with two homers, four RBI and six runs scored … he is hitting .382 on the year with four doubles, an SEC-best eight homers and 21 RBI.
• Senior right-hander Ma’Khail Hilliard defeated Bethune-Cookman on Sunday, working six shutout innings and allowing just two singles with no walks and six strikeouts … Hilliard fired 4.2 perfect innings to begin his outing before allowing a fifth-inning single … he fired 78 pitches in the outing, 59 for strikes, and only one Bethune-Cookman runner advanced beyond first base.
• LSU batted .328 as a team last week in its four games with 13 doubles, nine homers, 45 total hits and 34 runs scored … designated hitter Brayden Jobert batted .462 (6-for-13) with three doubles and four RBI … second baseman Cade Doughty hit .417 (5-for-12) with two doubles, two homers, six RBI and six runs … centerfielder Dylan Crews hit .412 (7-for-17) with one doubles, two homers, five RBI and five runs … shortstop Jordan Thompson tied his career high with four hits on Sunday versus Bethune-Cookman, as he was 4-for-4 at the plate with a double and three RBI.
• Sophomore right-hander Ty Floyd allowed just one unearned run on two hits in a career-long six innings in Saturday’s 5-1 win over Bethune-Cookman … Floyd recorded two walks, and he tied his career high with eight strikeouts … redshirt sophomore reliever Eric Reyzelman earned his first save of the season on Saturday by working the final three innings in relief of Floyd, allowing only two hits with no walks and seven strikeouts … graduate reliever Devin Fontenot earned his first win of the season on Friday versus Bethune-Cookman, as he fired 2.1 scoreless and hitless innings with no walks and three strikeouts.

ABOUT THE GREEN WAVE
• Tulane is 10-6 this season after starting the year with 10 wins in its first 12 games, including a series win over reigning national champion Mississippi State in New Orleans … the Wave also posted a series win over Louisiana Tech in Ruston on the second weekend of the season.
• Tulane is hitting .258 as a team with 41 doubles, three triples, 11 homers and 11 steals in 16 attempts … outfielder Ethan Groff is batting a team-high .411 with nine doubles, one triple, three homers and 15 RBI … catcher/infielder Luis Aviles is hitting .292 with three doubles, one homer and 11 RBI … infielder Chase Engelhard has seven doubles and one homer, and he ranks second on the club with 14 RBI.
• The Green Wave pitching staff has a 4.79 ERA with 139 strikeouts in 127 innings and a .259 opponent batting average … Tulane’s starting pitcher versus LSU, right-hander Carter Robinson, is a 6-8, 230-pound grad transfer from UL Lafayette.