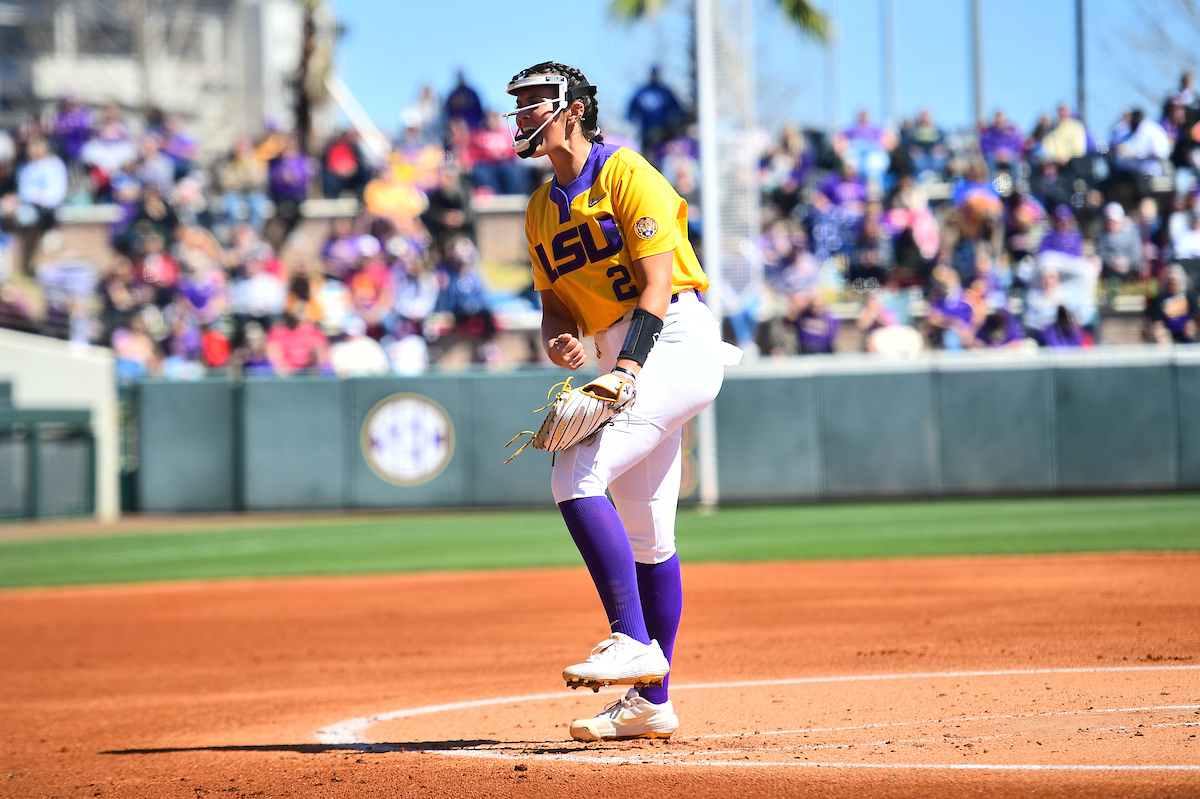 The Tigers take the three-game series from the Crimson Tide, 2-1. LSU batted .280 on the weekend highlighted by four home runs and held the Bama bats to a .176 average.

Sunday, sophomore Danieca Coffey went 2-for-3 at the plate and scored one run. Coffey extended her hitting streak to eight games and now has 12 multiple hit games this season. Junior Morgan Cummins logged the Tigers’ other hit on the day and sophomore Ciara Briggs recorded the team’s lone RBI with a sacrifice fly.

For the third time this series, Alabama started the scoring with a solo shot in the top of the second inning. The Crimson Tide crossed another run in the top of the third, but the Tigers responded with a run of their own in the bottom half. Briggs’ sacrifice fly scored Coffey who reached on a single, making the score 2-1 through three innings.

Junior Ali Kilponen allowed just one base runner after retiring 11 consecutive batters over the next four innings. She finished with six strikeouts and relinquished five hits and three walks in the complete game effort.

LSU threatened in the fifth inning. Cummins singled and sophomore Cait Calland came in as a pinch runner. Calland moved over to second base after freshman Sydney Peterson executed the sac bunt. Coffey logged her second hit of the day with a two-out single to left field. Calland charged home on the hit but was thrown out thanks to a well thrown ball from the outfield to end the inning. LSU was not able to secure another base runner in the sixth or seventh innings.

On the weekend as a whole…

“It was a solid weekend. The part that is not fun is knowing how close we were to winning the third one. There were so many ways that it could have gone different. That is what makes it tough, but overall, it is a very solid weekend for our team.”

On Danieca Coffey’s improvement throughout the year…

“She has worked hard for every inch that she has gotten. She has worked so hard to try to clean up her defense and be in the offensive spot that she is. She is an exciting player, I love what she is doing for us offensively and am starting to see so many good things coming from her on the defensive side, too.”

On her performance on the mound…

“I think today was a good day. It was a pitcher’s battle, but I also think it was a defensive battle. My defense worked hard for me today. It was amazing to see some of the plays that people have been working so hard for like Danieca Coffey. She worked hard all weekend on getting her glove side and she made some great plays for me out there on defense. Honestly, I really trusted my change-up today and it was effective. I have been working hard on that this past week.”

On winning two out of three against the No. 2 team in the nation…

“Yes of course we wanted to sweep the series, but at the same time we won two games. It just shows us that we can do it. Why not us? We are that good and we work that hard. It is time to prove some people wrong.”

“I knew I hit it pretty hard, and they were playing me pretty shallow, so I knew it was going to be close. Cait [Calland] ran her best and whatever Coach [Torina] decided is what we go with.”

On taking two out of three against No. 2 Alabama…

“It did give us a boost. I think everyone underestimates us because we are ranked 21, but we must go into it with the mentality ‘Why not us?’ They were 20-0, so why couldn’t we be the first ones to beat them?”

LSU will host a midweek game against Southeastern Louisiana at 6 p.m. Tuesday, March 15 before its three-game series at Texas March 18-19.